The first complete illustrated edition of Cervantes’s novel of Don Quixote appeared not in the original Spanish but in a Dutch translation, printed in Dordrecht in 1657. It contained as many as 24 illustrations, plus two frontispieces. Jacob Savery, the printer, was most probably also responsible for the engravings. In 1662, 16 of his illustrations were then reused in a Spanish edition printed by Jan Mommaert in Brussels. Then in 1672/73, Hieronymus and Johannes Baptista Verdussen of Antwerp printed an edition with the two frontispieces and 32 engravings of which the 16 were retained from the 1662 edition and 16 were new. These latter were engraved by Frederik Bouttats; the artist is unknown.

The illustrations of the three editions focus inevitably on narrative action with an emphasis on the more physical episodes. This supports the argument that in the 17th century Don Quixote was read largely as a work of entertainment. Limitations of space have restricted the current display in the British Library’s Treasures Gallery  to just two examples from this important tradition. Savery’s illustration of the unfortunate Sancho being tossed in a blanket is common to all three editions. One feature of these illustrations is the inclusion of more than one incident in a single image. Here, two incidents in chapters 17-18 of Part 1 are combined: the tossing of Sancho in a blanket (ch. 17) and Don Quixote’s attack on the flock of sheep in the background (ch. 18). 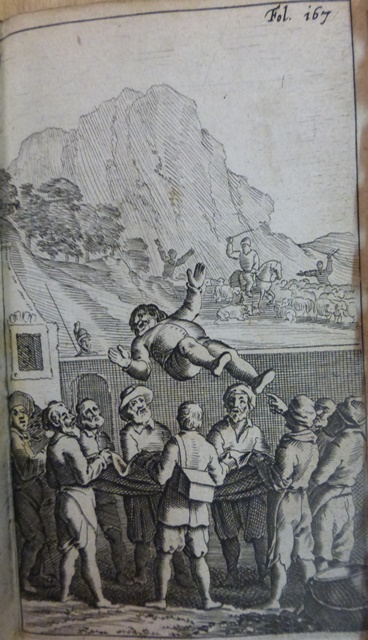 The same technique can be seen also in Savery’s illustration in all three editions depicting the concluding moments of Part 1 chapter 8. The narrative ends abruptly with Don Quixote and the ‘brave Basque’ confronting each other with swords raised ready to strike. The interruption occurs because, so it is claimed, the source text ended at this point. (The ‘discovery’ of a continuation is subsequently described in chapter 9.). Don Quixote and the Basque are placed in the foreground, in front of a coach and its lady passenger whom the Basque is escorting. In the background we can see also the preceding incident of chapter 8, Don Quixote’s disastrous charge against the windmills. 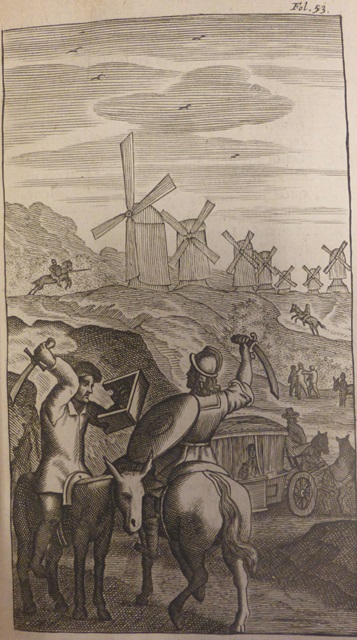 The illustrations added to the Antwerp edition of 1672/73, engraved by Fredrick Bouttats, are technically superior to those in the editions of 1657 and 1662. Don Quixote’s meeting with the enchanted Dulcinea, the result of Sancho’s stratagem, includes the same characters, but is livelier and more expressive. Both the knight and his squire are shown kneeling in homage to the ‘lady’ Dulcinea. Moreover, unlike Savery’s 1657 illustration, it illustrates in the background the subsequent action when Dulcinea rides off and is unseated by her donkey. Quixote and Sancho come to her aid. On their own the images of the 1657 edition had limited subsequent circulation except in Dutch versions, but those in the 1672/73 Antwerp edition were widely used in versions in French, English, German and Spanish until well into the 18th century.