Under the auspices of the German Studies Library Group and in association with the British Library, a lecture in memory of Graham Nattrass (1940-2012) will be delivered on 17th June 2016 at the British Library. Professor Joachim Whaley, LittD FBA, will speak on ‘The Empire of Print: Governance and Communication in the Holy Roman Empire 1495-1806’.

Graham Nattrass enjoyed a long and distinguished career at the British Library and its antecedents, having started work in 1971 at the National Central Library in Yorkshire (a predecessor of the BL’s Document Supply Service). In 1976 he moved to the Library’s London base, then in the British Museum, and joined the newly-constituted German Section the following year. Graham went on to become Head of Germanic Collections and by the time of his retirement in 2005 was Head of West European Collections. He was a founding member of the German Studies Library Group and its Chairman from 2003 until 2007. His memoir of his life and career at the British Library was published in the Group’s Newsletter, issues 44-45, 2012-13 (British Library ZK.9.b.1089). 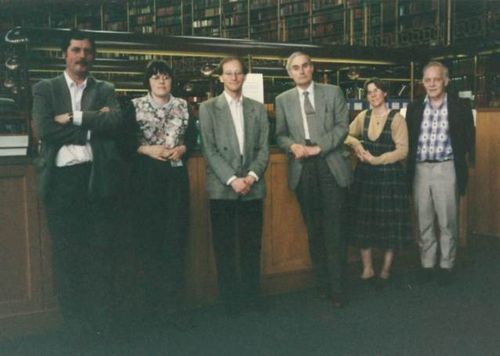 Graham Nattrass (3rd from right) with Germanic Collections colleagues in the Round Reading Room of the British Museum, June 1997.

Joachim Whaley is Professor of German History and Thought at the University of Cambridge (Graham’s own alma mater). He is currently a Fellow of Gonville and Caius College having previously held fellowships at Christ’s College and Robinson College, and he was first appointed to a lectureship at the University’s German Department in the Faculty of Modern and Medieval Languages in 1980. His publications include Religious Toleration and Social Change in Hamburg, 1529-1819 (Cambridge, 1985; X.800/41744) and Germany and the Holy Roman Empire 1493-1806, 2 vols (Oxford, 2012; YC.2012.a.17809 & YC.2012.a.14001).  He is currently writing a history of Austria and German-speaking Europe from the later Middle Ages to the present day.  Professor Whaley has been a Fellow of the Royal Historical Society since 1984, was awarded a LittD in 2013 by the University of Cambridge for his books and articles on early modern German history, and was elected a Fellow of the British Academy in July 2015. The Emperor and Princes of the Holy Roman Empire. From Hartmut Schedel, Liber Chronicarum (Nuremberg, 1493) IC.7542.

The event will take place in the British Library Conference Centre’s Brontë and Eliot Rooms and will start with refreshments at 5.30 pm, with the lecture commencing at 6 pm. There is no charge to attend, but places are strictly limited. If you wish to come, please email Dorothea Miehe, Chair of the German Studies Library Group: dorothea.miehe@bl.uk.