Here, there and every Eyre: Charlotte Brontë goes global

Although the British Library is rightly proud of its unique collection of manuscripts relating to Charlotte Brontë, including the four letters which inspired Chrissie Gittins’s poetry collection Professor Héger’s Daughter, its European collections also contain a number of volumes which reflect the worldwide reputation which this modest and retiring author achieved after her premature death in 1837. 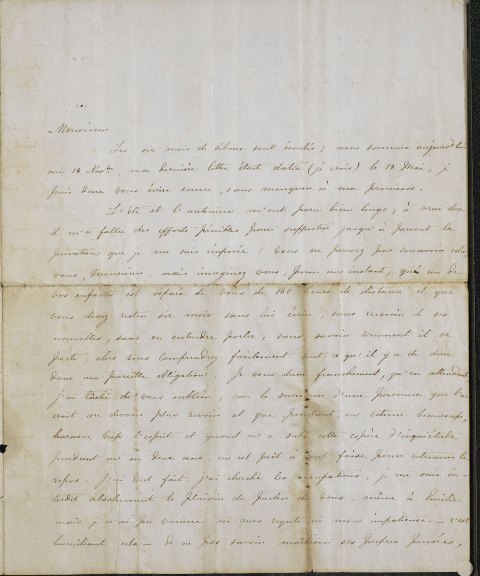 Throughout her life Charlotte Brontë travelled farther in her imagination than in reality. After two brief periods in Brussels at the boarding-school run by Constantin Héger and his wife, she did not leave England again until her visit to Ireland in 1854, where she encountered not only the family of her new husband Arthur Bell Nicholls but the country from which her father originated. Her first sojourn in Belgium was cut short by the death of her aunt, which compelled Charlotte and her sister Emily to return to Haworth; the second was marked by growing homesickness and a strong but unreciprocated attachment to Héger. Back in Yorkshire, she addressed to him a series of increasingly anguished letters which make it clear that she felt intellectually as well as emotionally starved and stifled there despite her ability to range far beyond her immediate surroundings through the creative power of her mind. 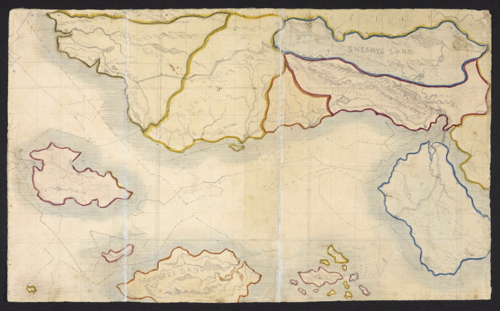 A hand-drawn map of the imaginary country of Angria from Branwell and Charlotte Brontë’s notebooks (Manuscript of The History of the Young Men from their First Settlement to the Present Time; BL MS Ashley 2468)

As a young girl Charlotte and her brother Branwell had invented the country of Angria, and for years wrote detailed chronicles of its inhabitants and history. In 1846 she and her sisters Emily and Anne paid for the publication of a joint collection of their poems. This sold only two copies, but undeterred by that and the fact that her first novel The Professor did not find a publisher, Charlotte completed a second novel, Jane Eyre: An Autobiography. Published on 16 October 1847 by Smith, Elder & Co. under the pseudonym Currer Bell, it achieved immediate commercial success and acclaim. To a certain extent this was a succès de scandale, as some critics found the novel crude and even anti-Christian. This did nothing to halt its sales, though, or to deter translators or adapters from spreading interest in the author’s work abroad.

Among early versions of Charlotte Brontë’s writings in other languages, the British Library possesses a Danish translation of Shirley (1851; RB.23.a.16151), a German one of The Professor (1858; RB.23.a.2077) and a Hungarian Jane Eyre (1873; 12603.ff.17). Besides direct translations, the latter’s dramatic quality had also inspired interpretations (with varying degrees of fidelity) for the stage. A German translation of the novel, Jane Eyre: die Waise von Lowood, had already gone into a second edition in 1864 (12637.a.7.), and in 1892 the ‘orphan of Lowood’ appeared on the German stage in a play with a similar title (11746.df.11.) by Charlotte Birch-Pfeiffer, ‘freely based’ on the original. Even earlier, in 1874, she had made her Italian theatrical debut in L’orfanella di Lowood, a drama in a prologue and three acts by R. Michély, ‘adapted from the German’, which received its première in Naples at the Teatro dei Fiorentini on 27 April 1871, ‘replicato sempre a richiesta e con entusiasmo’. 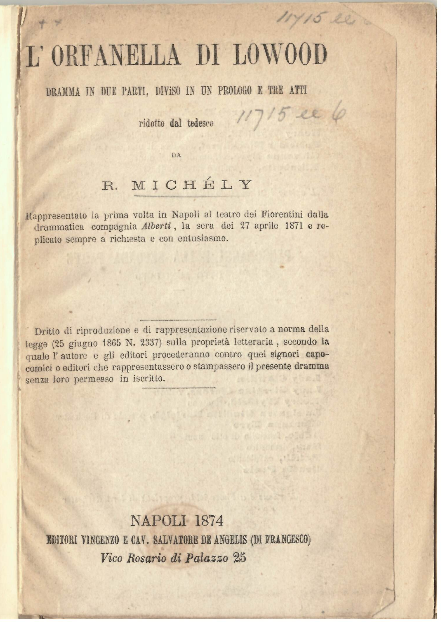 We may wonder whether the author would have recognized her creation in ‘Giovanna Eyre’, whom we first meet as a girl of 16, humiliated and slighted by her odious cousin John and her aunt, ‘la signora Sarah Reed’, who is determined to send her to the orphanage of Lowood despite the protests of her own brother, ‘Henry Wytfield, capitano’, whose debts prevent him from taking charge of his niece. In the first act, eight years later, the scene changes to ‘Fhornfield’ [sic], the estate of ‘Lord Rowland Rochester’, where a glittering company is assembled, including not only Rochester, his eight-year-old ward Adele, Lady Clawdon, ‘Baronetto Francis Steensworth’, ‘la signora Giuditta Harleigh’  (a relative of Rochester),  Lord Arturo and Mrs. Reed, but also the latter’s daughter , now the widowed Lady Giorgina Clarens. The housekeeper Grazia Poole is also in evidence, implicated in a series of strange events which culminate in an attempt on Rochester’s life.

Giovanna saves him, but responds to his overtures with such coolness that he exclaims ‘Creatura insopportabile!’ as she makes her escape. The Ingrams are nowhere to be seen; instead Giovanna mistakenly believes her cousin Giorgina to be the object of Rochester’s attentions, providing still more opportunities for noble expressions of forgiveness and self-sacrifice. And while there is indeed a madwoman locked in the tower, she is not Rochester’s wife but Lady Enrichetta Rochester, the fiancée who had betrayed him by marrying his elder brother Arturo, the heir, while he was away in London. Trying to kill her, Rochester was thrown into chains and transported to the Indies, while, tiring of Arturo, the evil Enrichetta eloped with a Pole. Rochester caught up with them in Paris, where he slew the seducer before Enrichetta’s eyes, a shock which drove her mad.  She and Adele, the offspring of her liaison with the Pole, were entrusted to Rochester by his brother as the latter died of remorse, and the action ends with the revelation that Giorgina cares not for Rochester but only for his riches, as Giovanna throws herself, crying ‘Io t’amo…son tua!’,  into the arms of Rochester, who responds ‘Mia, mia per sempre!’ and presents ‘lady Giovanna Eyre’ to the assembled company as ‘my betrothed…my wife, my treasure, your cousin, Lady Clarens, the worthiest and most virtuous of women who from now on will be the pride of my family and of yours!’

Perhaps Charlotte Brontë might have been somewhat startled at such outspoken transports of passion on the part of her heroine, but whatever she might have thought of the twists of a plot more tortuous than any she herself had conceived, she might well have rejoiced to see her creation travelling far beyond her native land, and much farther than she herself had ever done.