If that title sounds like a cryptic crossword clue, so much the better. 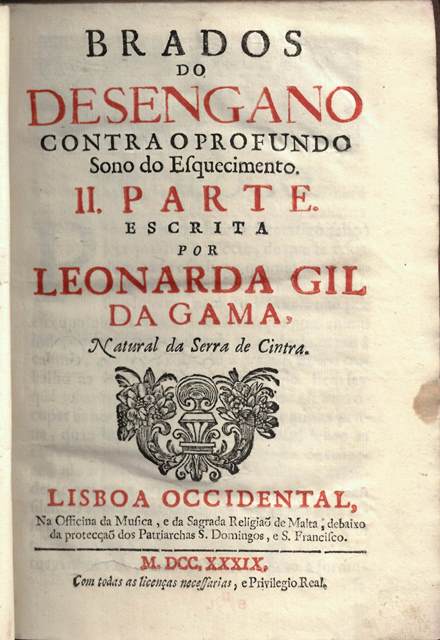 An improving novel in the baroque style, interspersed with poems. The author (1672-1760?) was born Maria Magdalena Eufémia da Glória. When she entered the Franciscan order at the convent of Nossa Senhora da Esperança in Lisbon, she took the name in religion Magdalena da Gloria. She wrote under the pseudonym Leonarda Gil da Gama, an anagram of her religious name. Her convent was home also to Maria do Ceu (b. 1658), author of several baroque works. Sister Maria has been studied in recent years, but it looks as if Leonarda’s star has yet to rise again.

The reason for her affecting a pseudonym was not her sex (Maria do Ceu had no such problem) but presumably her vocation. One wonders how much of a secret this was: the Prologues recognise that her name is an anagram, and given the anagram-crazy culture of the Baroque it must have been child’s play to unmask her. 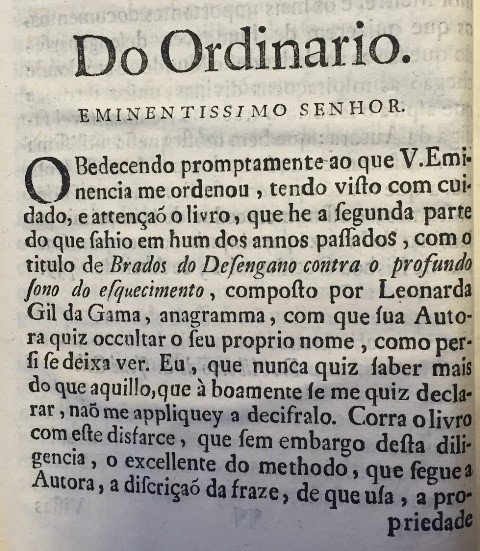 Leonarda’s use of an anagrammatic pseudonym as mentioned in the preliminaries to the book.

The Spanish Jesuit Baltasar Gracián (1601-1658) hid his identity under that of his brother Lorenzo and the anagram García de Marlones.

Baroque style lived on in Portugal in prose and verse when it was rather in decline elsewhere. One indication of this is that most of the 17th-century poets are to be read in the anthology A Fenix renascida (‘Phoenix reborn’) of 1716-28 (we have a mixed set at 11452.a.23.).

In his bibliography, Innocêncio Francisco da Silva tells us she was much admired in her own time, dubbed the Phoenix of Wits (Phenix dos Ingenhos), although ‘today [1860] few would be able to bear reading her works, on account of her exquisitely conceptista style’.

This is a new acquisition. We have other works by her, all apparently acquired quite recently, an indication both of the long period of neglect which she has suffered and a sign that her fortunes may be rallying.

Should you wish to assist this process of reassessment, where better to start than the British Library?

Walter Begley, Biblia Anagrammatica, or the Anagrammatic Bible: a literary curiosity gathered from unexplored sources and from books of the greatest rarity ... With a general introduction and a special bibliography. (London, 1904) 3129.e.77.