The Chernobyl disaster wasn’t just an unprecedented environmental disaster: it was an event that caused profound political and cultural shifts on a global scale. The disaster foreshadowed and accelerated the collapse of the Soviet Union and the Cold War order, and the political reverberations of this were felt the world over. Yet it also forced a rethink of human beings’ relationship with the natural world, and compelling societies to face up to the fact that a nuclear apocalypse was no longer the stuff of science fiction, but a reality that was perilously close.

For all of these reasons, the name Chernobyl – or to use more accurately its Ukrainian form Chornobyl – is a worldwide symbol of the disastrous climax of Western modernity. The Chornobyl Zone continues to function as a phantom, warning humanity of the dangers inherent in blind technological advancement, with endless images or drone films of the ghost town of Prypiat affording internet users the vicarious thrill of wandering a post-apocalyptic landscape. Western horror movies and video games take the Zone as their setting. Yet the real Chornobyl, the real Zone, with its real abandoned villages and its real locals – those displaced and those who stubbornly return – is less often the subject of Western reflection.

To understand Chornobyl at ground level, one needs to turn to those who know these territories intimately. Voices from Ukraine, the country where the Chornobyl disaster occurred, are crucial to our understanding of the event. The distinguished poet and former dissident Lina Kostenko, for example, has dedicated a whole series of poems to the disaster, and also discusses it in her only novel, Zapysky ukrainskoho samashedshoho (‘Notes of a Ukrainian Madman’, Kyiv, 2010; YF.2011.a.18275). Kostenko was born in 1936 not far from Chornobyl, and worked in the Zone after the disaster as part of an expedition to help preserve cultural heritage. Her earliest poems on the subject were published in its immediate aftermath, though she has continued to return to the disaster in later work. 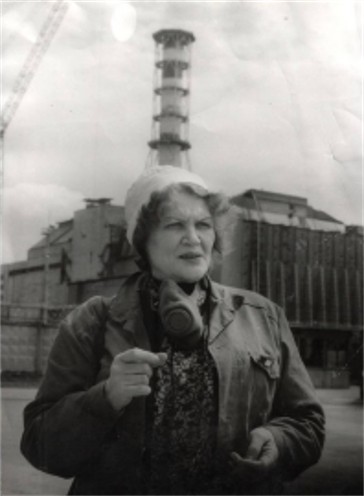 Lina Kostenko near the Chornobyl  Nuclear Plant (From Encyclopedia of Ukraine)

The poems provide a detailed description of the environment of the Zone, the animals and plants that thrive there, the abandoned villages with their traditional houses and wickerwork fences, and the forests, where ancient Slavic gods still sleep in the trees; yet they are also soaked in an atmosphere of silent, invisible dread: the morning dew becomes ‘deathly sweat on the grass’, a willow bending over a river is actually a sleeping devil, while in the poem ‘Chornobyl-2’, the abandoned reactor looms over the forest like a ‘phantom, a skeleton’, ‘the emperor of all anti-nature’ whose ‘antennae moan in the winds’. The catastrophe-devil scrawls obscenity on the windows of empty houses, and shatters the icons that hang on the walls. 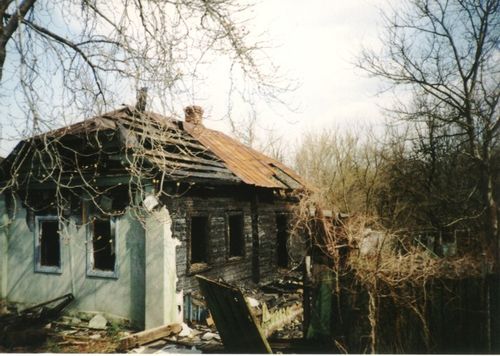 House in a village near Pripyat, abandoned after Chornobyl accident (Photo by Slawojar, From Wikimedia Commons CC BY-SA 3.0)

Elsewhere, Kostenko notes in relation to post-Chornobyl Europe that ‘Scheherazade’s tales run dry/Lorelei sings by the Rhine no more’. There is something about Chornobyl, its scale and significance, that destroys more than just the material or natural world: it also destroys our ability to understand and tell stories. This sense of a post-catastrophic culture is widespread across the post-Soviet world, and is particular acute in Ukraine. Tamara Hundorova, one of Ukraine’s leading literary and cultural critics, notes that Chornobyl not only ‘undermined belief in socialist modernization, which for more than half a century had manifested itself through the excessive physical and mental exploitation of human beings’, but also exploded previous cultural practices. In her book Pisliachornobylska biblioteka (‘The Post-Chornobyl Library’, Kyiv, 2005;  revised edition 2013), one of the best works of cultural criticism to emerge form the post-Soviet world, Hundorova argues that the experience of being at the epicentre of the implosion of not just Soviet but also wider modernity, meant that representing the world would never be the same for Ukrainian writers. Traditional representational strategies are discredited, and the postmodern, in a distinctly post-catastrophic version, enters into Ukrainian culture. 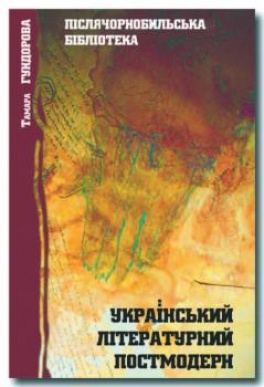 It is no coincidence, for Hundorova, that it is precisely around 1986 that a trio of postmodernist performance poets, collectively known as the ‘Bu-Ba-Bu’, formed itself in L’viv, and revolutionized Ukrainian poetry with its irony, obscenity, burlesque humour and total disrespect for both official Soviet culture and the staid nationalist discourse that opposed it. It was at this time that a young Oksana Zabuzhko, today one of Ukraine’s leading novelists and public intellectuals, started her ground-breaking explorations of the intersections of culture, language, gender and sexuality, while the formal and philosophical experiments of prose writers like Iurii Izdryk, Taras Prokhasko and Serhii Zhadan that appeared in the 1990s shatter all previous conceptions of what Ukrainian literature could and should be. While these writers may not all write about Chornobyl explicitly, the shattering of existing social, political and cultural preconceptions that it entailed can be felt in every word.

In a poem from 1987, Lina Kostenko uses the phrase ‘a terrible kaleidoscope’ to refer to a world of disparate yet and interconnected calamities; but it also feels appropriate for the fevered explosion of cultural diversity and energy that was released in Ukraine in the late 1980s and early 1990s, which Hundorova so expertly describes.

Chornobyl is not, then, just a geopolitical and environmental event. It is a cultural one. For anyone wishing to understand the cultural impact of witnessing such trauma up close, Ukrainian culture, as seen through Kostenko’s and Hundorova’s lenses, is an instructive place to start, demonstrating how catastrophe can represent both irreparable destruction and the impetus for radical cultural reconfiguration.