This year marks the 370th anniversary of the famous Trebnyk (Euchologion), created by the prominent reformer, Petro Mohyla  and his associates, and published in the printing house of the Kyiv Monastery of Caves (Lavra).

In the first part of the 17th-century book printing flourished in Ruthenia (now Ukraine), then part of the Polish-Lithuanian Commonwealth. Skilfully produced books from the Ukrainian printing houses were in great demand at home and abroad, in Muscovy, Bulgaria, Moldova, Wallachia and Montenegro. The printing-house of the Monastery of the Caves played a leading role in this. Founded in 1606-1615 by Archimandrite Elesei Pletenets'kyi, it worked intensively in the 1620s-1640s under the new Archimandrite Petro Mohyla, who introduced systematic printing in Polish and Latin as well as Cyrillic. 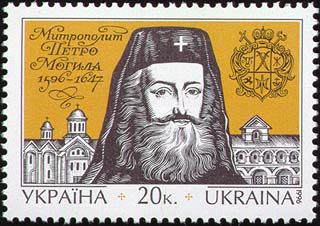 Mohyla studied in the school of the Lviv Dormition Brotherhood and then in the universities of Western Europe. After his appointment as Archimandrite of the Monastery of the Caves (in 1627) and Metropolitan (in 1632), in his own words, he promised to God to use his family’s wealth and the church income for the repair and reconstruction of vandalized churches for founding schools in Kyiv (the future Kyiv-Mohyla Academy), and for the spiritual enlightenment and education of the Ukrainian people. One of the great liturgical needs of the Ukrainian Orthodox church at this time was an authorised edition of the sacraments, known as the Trebnyk or Euchologion. 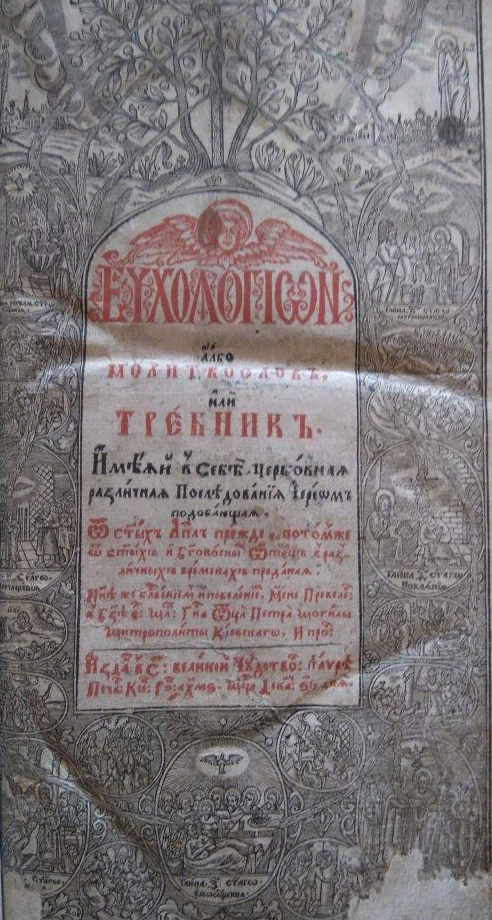 According to Arkadii Zhukovs'kyi, in the preparation of the Trebnyk Mohyla and his associates used the Greek and Church Slavonic manuscript Euchologia, and also the Roman Catholic Euchologion – Rituale Romanum Pauli V Pontificis Maximi. Some parts of Mohyla’s Trebnyk were discussed and approved at the Kyiv Church Council of 1640. The book includes three main parts. The first contains the seven main sacraments and some minor ones; the second includes rites for consecration, and the third prayers for different occasions. In Fedir Titov’s opinion the sacrament of marriage was definitely prepared by Mohyla himself. It was originally published in the printing house of the Monastery of Caves under the title Mowa duchowna (1645) and dedicated to the marriage of Janusz Radziwiłł  and Maria, the daughter of the Hospodar Vasile Lupu, celebrated by Mohyla in Iaşi in 1645.

Mohyla delegated the artistic design of the Trebnyk to his close associate, the monk Ilia, well-educated, gifted and the most prolific engraver in Ukraine at this time. Ilia was originally a monk in the Monastery of St Onuphrius in L'viv and from 1639-1640 worked in the Monastery of the Caves. In 1641-1642 he also spent time in the printing-house of the Trei Ierarhi monastery in Iaşi, founded with Mohyla’s help.

The earliest date on Ilia’s engravings is 1637, the latest 1663. At the beginning of his career the artist signed himself Ilia ANAKZNOZ [sic], from the Greek ‘anaksios’ (‘unworthy’). Later he probably took the highest monastic vows (skhema), which is why from 1651 С, СХ or СК (abbreviations for ‘skhymnyk’) appeared next to his name.

The construction and artistic design of the Trebnyk are subordinated to the concept of the book as a whole. Special attention was paid to the border of the title-page, a masterpiece of Ukrainian Baroque art, which forms an exact summary of the book’s contents. The sides of the woodcut are filled with miniature scenes. At the top is the Crucifixion, where blood from Christ’s wounds flows down to seven medallions depicting the Sacraments. Between them are twelve smaller ovals with pictures of the Passion. Christ’s passion and death will expiate original sin; his blood sanctifies the sacraments. The border is very closely engraved. Ilia leaves hardly any empty space, surrounding miniature scenes with delicate background ornament. He makes use of various methods of cutting the surface of the block to achieve a decorative richness. At the foot of the block on the plant leaves is the engraver’s signature in Latin: ‘Helias.a+Rok+16+46+Oktob+7’. Discussing the publications of Mohyla’s period, Titov noted that previous engravers of the Monastery of the Caves printing-house, probably supervised by the Archimandrites, followed their own iconographic patterns, but later appear to have an obvious attraction to Western European sources. A clear example of this tendency is Ilia’s full-page illustration of the Crucifixion (1644), which has no analogies in earlier Ukrainian art. Its iconographic programme follows the patterns of Italian Renaissance painting where branches supporting flowers with circular scenes in their centres spread from the cross with the crucified Christ. In the spaces between them, however, Ilia used traditional floral motifs, very similar to those of native folk art, creating a fine example of 17th-century Ukrainian engraving. 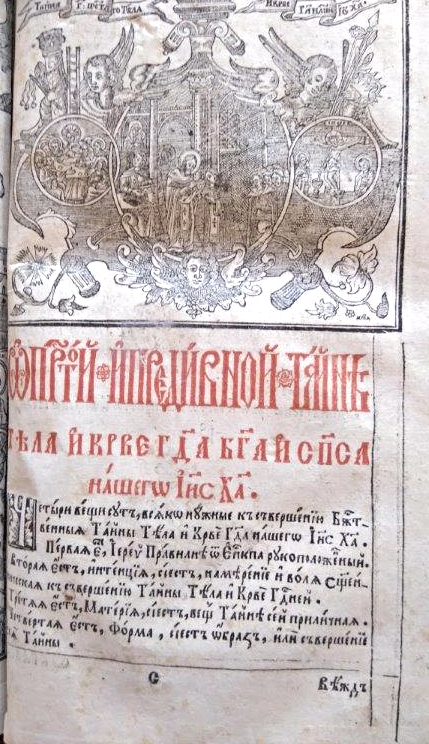 At the beginning of each of the seven main Sacraments there is a detailed half-page illustration. Some of them, like the Eucharist (above), resemble the parts of an ornate Baroque iconostasis, with flamboyant woodcuts surrounding the circular images of traditional iconographic patterns. Others like the Funeral (below), initially created by Ilia, present a story developing in time, with a funeral procession, where some people are dressed in rich contemporary clothes, starting in the town and concluding outside the walls with the lowering of the coffin into the grave. A striking impression is made by a naked footless beggar asking for charity and the group of weeping women in the cemetery. 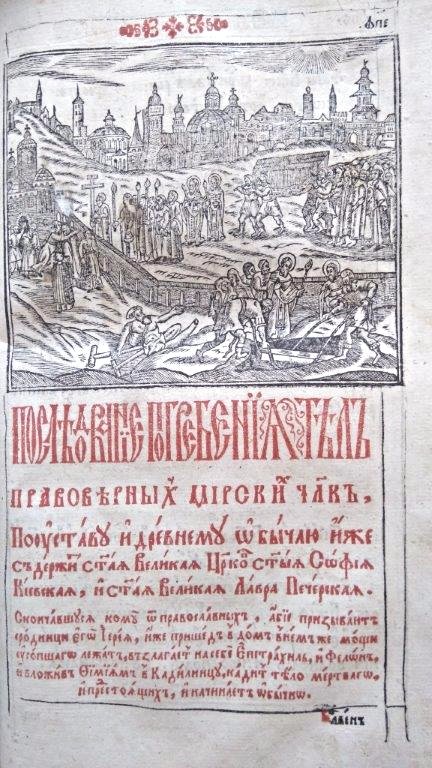 The Trebnyk was the culmination of Mohyla’s printing programme; he died two weeks after its completion. His sudden death, and the war which soon erupted in Ukraine, affected the work of the Monastery of the Caves printing-house for a long time.