Till Eulenspiegel, a Fool for all Seasons

Fools have a long history in literature as people who dare to speak truth to power or figures of fun who reflect and thus rebuke our own follies. In early modern Germany, the popular genre of Narrenliteratur used the latter kind of fool to satirise contemporary types and their behaviour, most notably in Sebastian Brant’s Narrenschiff. 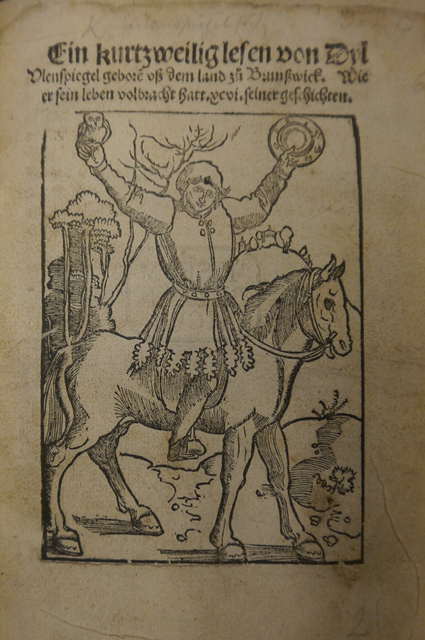 Title-page of Ein kurtzweilig leren von Dyl Ulenspiegel  ... (Strassburg, 1515) C.57.c.23(1); this is the only complete surviving copy of this early edition.

A less didactic German literary fool from the same period is the trickster Till Eulenspiegel, whose exploits first appeared in print around 1511. Most of Till’s tricks spring simply from a love of mischief. In the second of the 95 chapters in the book, we learn that from the age of three he ‘applied himself to all kinds of mischief’ and was declared a scoundrel (‘Schalck’) by his neighbours. Confronted with this accusation by his father, young Till offers to ride behind him through the village to prove that he is unfairly maligned; unseen by his father, he bares his backside at the neighbours, whose loud complaints convince the father that Till was simply ‘born in an unlucky hour’. 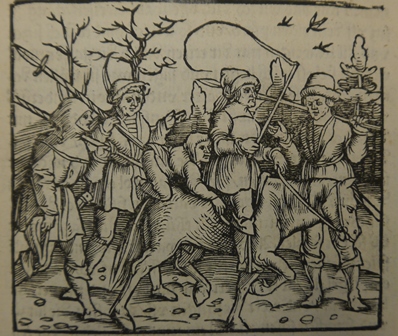 Till tricks his father and offends the neighbours. From Ein kurtzweilig leren... (f. 4r)

Sometimes Till plays tricks not just for the sake of mischief, but to gain food or money or as a form of vengeance against those who exploit or insult him. Employed as a watchman by the Count of Anhalt, when nobody remembers to bring him food he deliberately shirks his duty, claiming he is too weak with hunger to blow his horn. Later he sounds a false alarm which sends the Count’s men rushing from the castle so that he can steal their dinner. 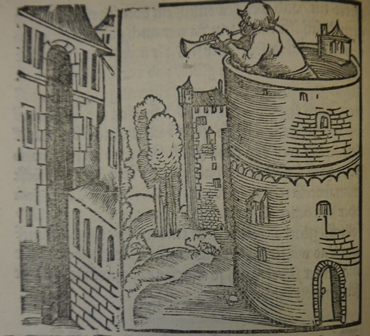 Till attempts many trades and crafts in his life and generally causes mayhem, often by deliberately misunderstanding an instruction or taking figurative language literally. Again, this is sometimes a ploy to get his own back on a master he dislikes, but sometimes just pure foolery, as when he works for a tailor and is told to sew ‘so that no-one will see it’ so hides beneath a tub to work.

In other tricks, Till exposes the folly or greed of authority figures. Even on his deathbed, he manages to trick a greedy priest into digging deep into a ‘pot of gold’ which in fact contains excrement beneath a thin layer of coins. If this seems a tasteless detail, it is in fact one of the milder examples of the scatological humour which characterises many of the tales. This element was gradually toned down in later centuries when the stories became popular as children’s literature; it was only with the revival of academic interest in the book that unexpurgated editions became  more widely available again. 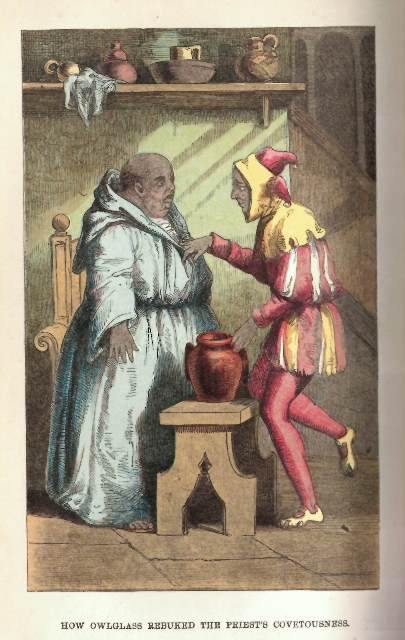 Till tricks the greedy priest. Illustration by Alfred Crowquill, from The marvellous adventures and rare conceits of Master Tyll Owlglass translated by Kenneth R. H. Mackenzie (London, 1860). 12316.d.22. In this bowdlerised version the pot contains pitch beneath the coins.

The last chapter shows Till’s epitaph with the motif of an owl and a mirror. ‘Owl-Mirror’ is the literal translation of ‘Eulenspiegel’, and in one tale Till leaves pictures of these attributes with the Latin words ‘hic fuit’ over the door of a smithy where he has tricked his master – ‘Eulenspiegel woz ere’.  A memorial in the North German town of Mölln shows a figure holding the same symbols and is claimed as the resting place of the original Till, who lived in the early 14th century. However, in its present form the plaque post-dates the first publication of the book by at least two decades, and there is no firm evidence that there was ever a ‘real’ Till Eulenspiegel. But whether based on a real figure or entirely imagined, once in print Till was unstoppable. The book went through many editions and translations, and the character of Till became well-known in Germany and beyond. Wilhelm Busch borrowed two of Till’s pranks for his own classic tricksters Max und Moritz, while Richard Strauss’s 1895 tone poem Till Eulenspiegels lustige Streiche  was inspired by the character and stories. Till’s name has been given to a satirical magazine and a publishing house as well as various other brands. There are at least three Eulenspiegel museums in Germany, and even some schools bear his name, something which might give a touch of rebellious pleasure to any disaffected pupil who has read how the uneducated Till defeated the learned professors of Prague and Erfurt. Till ‘teaches an ass to read’ to get the better of the Erfurt professors, from Ein kurtzweilig leren ... (f. 39v)