Nikolai Gusev, Tolstoy’s personal secretary, stated in his memoirs that “for Tolstoy music was not an amusement but an important business in life” as Tolstoy was “a good musician and composer”. The professor of music at the Moscow conservatory, Aleksandr Goldenveizer, a regular visitor to Tolstoy’s home for some 15 years, noted that Tolstoy, as well as many members of his family, was musical by nature and that in his youth, when he occupied himself for hours on the piano, he even thought of becoming a musician. During this period Tolstoy composed a waltz for piano. Goldenveizer recorded in his memoirs, how he and the composer Taneev  wrote down the waltz when Tolstoy played it for them at Iasnaia Poliana in 1906. 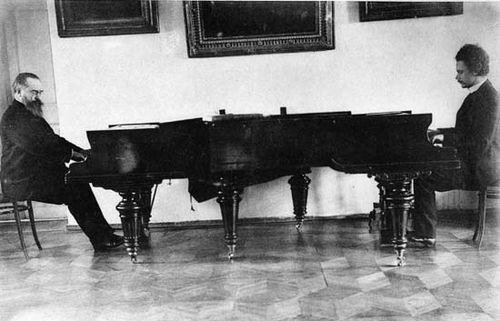 Tolstoy’s ‘Waltz in F’, his only known musical composition, was recorded several times, for example by Christopher Barnes and Imogen Cooper (both available in the British Library’s sound collections). Tolstoy remained a dilettante in music all his life, but was sensitive to it to a considerable extent. Tolstoy’s autograph MS of his 'Waltz in F’, reproduced in Lev Tolstoi i muzyka.

Tolstoy was always deeply interested in the question of what music was and what the philosophical grounds of its inner existence were: What is music? What does it do? Why was it made? Why do sounds of different pitch and degrees of strength, separate or simultaneously sounding together, following one after another in time and combining in a kind of rhythmical construction, have such a powerful, infectious influence on man? Why does this sound combination appear on one occasion as a senseless assortment of sounds, and on another as the symphonies of Beethoven? No satisfactory answer can be given to these questions.

Tolstoy’s ideas on music were related to his ideas on nature (i.e. concrete objects portrayed): how in literature and the fine arts some kind of nature is always reproduced (whether taken from actual life or from the artist’s fantasies), and how in instrumental, chamber and symphonic music of (opera and programme music are excluded) there is the very absence of nature. His conclusion is that the contents of a musical work are clearly and forcefully conveyed by the musical work itself and do not need any kind of literal translations. In 1850s, Tolstoy defined music as “a means to arouse through sound familiar feelings or to convey them” later noted in his diary that “music is a stenograph of feelings”. Goldenveizer even recalled from his conversations how Tolstoy developed an analogy between music and dreams where there is a discrepancy between responses and their causes. This leads to the conclusion that “music does not cause states such as love, joy, sadness but summons them up in us”. 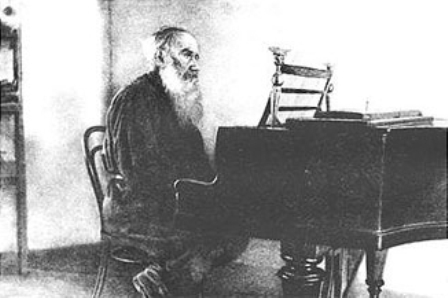 Tolstoy at the piano.

Tolstoy liked music with definitely expressed rhythm, melodically distinct, lively or full of passionate excitement. His favourite composer was Chopin. Listening to Chopin, Tolstoy experienced (in his own words) the feeling of “complete artistic satisfaction”. Tolstoy also liked Mozart, Haydn and Weber, particularly Mozart’s Don Giovanni, which was remarkable as he did not like opera as a genre in general and considered it a false kind of art. He seldom went to the opera and having seen Wagner’s Siegfried once, gave a destructive account of it in Chto takoe iskusstvo? (‘What is Art?’, 1897). Instrumental music made a stronger impression on Tolstoy than singing; he is quoted as saying about singing: “This union of the two arts has never had an effect on me. You always only listen to the music, but don’t pay attention to the words”. This is why the singing of Fyodor Shaliapin  did not make a big impression on Tolstoy. 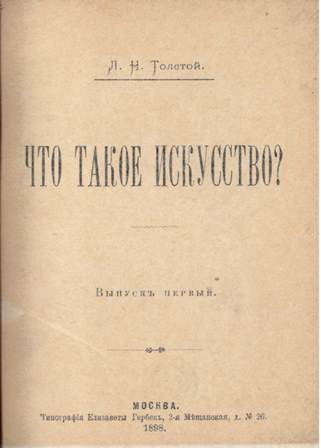 Tolstoy also showed an ambivalent attitude towards the music of Beethoven. When Tolstoy heard Beethoven he admired and was captivated by him, but when he spoke or wrote about Beethoven he often responded negatively considering that Beethoven began the decline of musical art. There are amazing descriptions of Beethoven’s sonatas in Tolstoy’s works, for example in The Kreutzer Sonata (1890) or Semeinoe schast’e (‘Family happiness’, 1859), where the mournful majestic sounds of the sonata‘Quasi una fantasia’ make the heroine confess “Beethoven lifts me to a radiant height”.

It is likely that Tolstoy’s wavering in his evaluation of Beethoven is down to the fact that Beethoven and Tolstoy were very similar in temperament: Tolstoy instinctively opposed all kinds of authority - Beethoven thrilled Tolstoy with his powerful individuality and this made him angry as he did not like to submit. 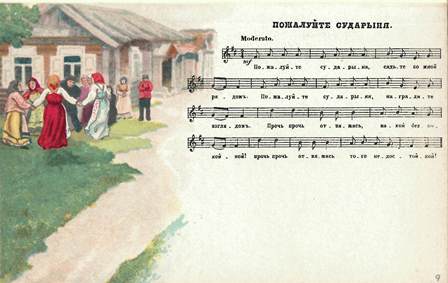 Russian folk-song and dance, from a collection of illustrated postcards, ca. 1900. A.868.z.

Tolstoy’s attitude towards folk music was always positive. He also liked gypsy singing, which can be found in works like Dva gusara (‘Two Hussars’, 1857). Tolstoy’s attitude to certain composers and types of music seemed to be influenced by the performances he witnessed or by the performers who visited him. Among musicians who visited Tolstoy and played for him were Anton Rubinshtein, Taneev, Skriabin, Rakhmaninov and Rimsky-Korsakov, who had been extremely negative about the ideas contained in Tolstoy’s What is Art?, but held back from expressing this at the time.