On April 24 2016 Vera Rich would have been 80. Everybody who knew this remarkable woman, seen often in the British Library’s Reading Rooms or on the Piazza, still can’t believe that she is no longer amongst us. I was particularly struck by the obituary in Index On Censorship written by Judith Vidal-Hall, stating the facts, obvious to all who met her:

Vera (born Faith Elizabeth) Rich, who died at home on 20 December 2009, was, quite simply, unique, her formidable intelligence matched only by her stubborn resistance to the cancer that plagued her later years.
They will miss her, increasingly, for there will not be another like her. I shall miss her very particular brand of extreme eccentricity combined with humour and the touch of genius. 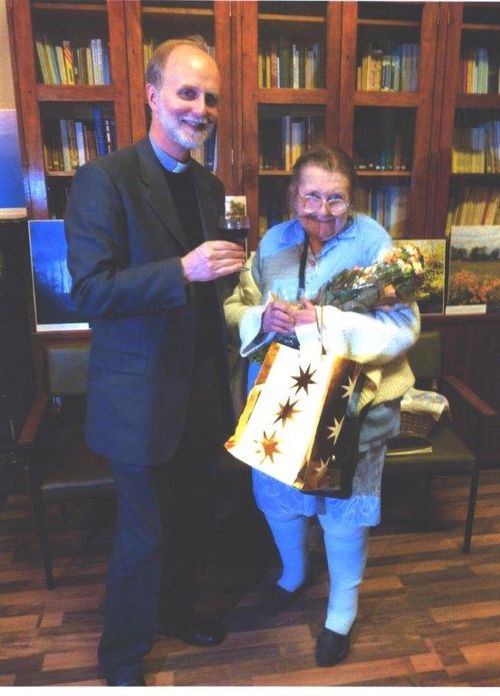 Vera Rich with the Right Reverend Borys Gudziak, then rector of Ukrainian Catholic University in Lviv, at the Ukrainian Institute in London (Photo by Olga Kerziouk)

I am one of those who miss her badly. I miss her phone calls and emails (example below), reading Shevchenko in Ukrainian on the Piazza during coffee breaks, ordering books to answer her numerous queries about Ukrainian and Belarusian culture. Vera Rich is one of the best-known modern British names in Ukraine and Belarus. To understand why, it is worth looking in our catalogue. 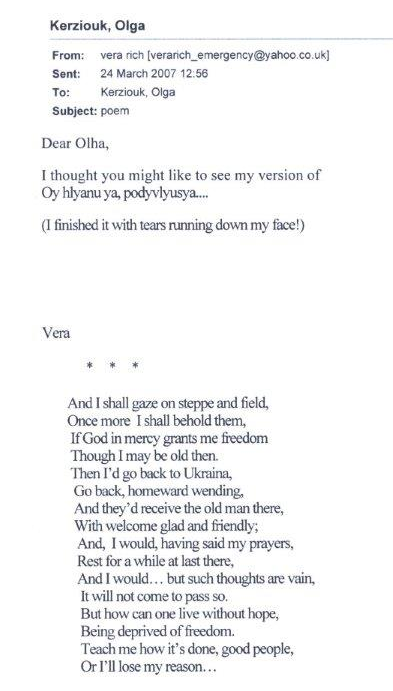 Her contribution to translating and promoting Belarusian and Ukrainian literatures is enormous. English speakers interested in Eastern European literatures became familiar with works by Lesya Ukrainka, Taras Shevchenko, and Ivan Franko due to Vera’s translations. The British Library holds Constantine Bida’s, Lesya Ukrainka: life and work, which includes selected works translated by Vera Rich (Toronto, 1968; X.900/3941). For the 150th anniversary of Shevchenko’s death she translated his poetry for the book Song out of darkness. 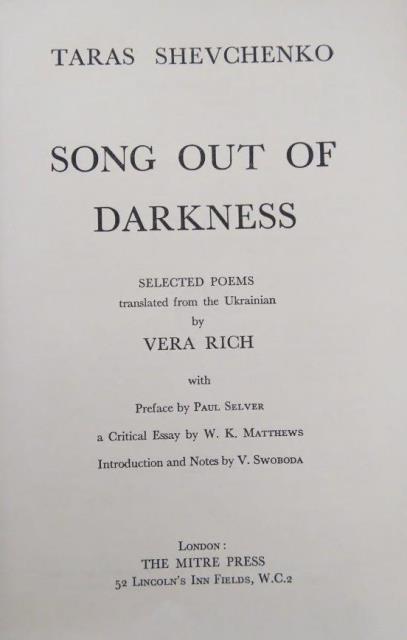 The crowning achievement of her career as a translator from Ukrainian was published posthumously in 2013, for Taras Shevchenko’s 200th birthday: a translation of his Kobzar (Kyiv, 2013; YF.2014.b.264). Other translations are available online in the Ukrainian Electronic Library, such as her translation of a famous poem by Ivan Franko, Moisei (‘Moses’). A full bibliography of her Ukrainian literary translations is included in Hanna Kosiv’s monograph : Vira Rich: tvorchyĭ portret perekladacha (‘Vera Rich: portrait of a translator’; Lviv, 2011; YF.2012.a.17207). Interesting memoirs about meetings with her are published in a book by the Ukrainian literary critic Dmytro Drozdovsky Merydian rozuminni︠a︡ (Kyïv, 2011; YF.2012.a.12084). For many years Vera worked with the Ukrainian émigré community; from 1993-1999 she was a Deputy Editor of The Ukrainian Review (P.P.4842.dns), and later she wrote a popular column about recent news from Ukraine with the picant ending “And finally…” for the London-based émigré newspaper Ukrainska Dumka (‘Ukrainian Thought’; LOU.1165 [1994])

Her first translation from Belarusian appeared in 1957 in the émigré newspaper Batskaushchyna (‘Fatherland’), published in Munich (MFM.MF537T). It was a poem by the famous Belarusian poet Janka Kupala. In 1971 the first anthology of translations of Belarusian poetry into English, Like Water, Like Fire: An anthology of Byelorussian poetry from 1828 to the present day (X15/4600), containing the work of 40 poets, was published, followed by a bilingual selection of poetry, The Images Swarm Free (London, 1982; X.950/22024) with translations of poems by Ales Harun, Maksim Bahdanovich, and Zmitrok Biadula. In 2004 Radio Free Europe in Prague published her translations of modern Belarusian poetry Poems on liberty: reflections for Belarus (YD.2011.a.1845). After her death her translations were included in a bilingual book Melodiya︡ natkhnenni︠a︡ = A melody of inspiration (Minsk, 2012; YF.2012.a.21519; photo below). 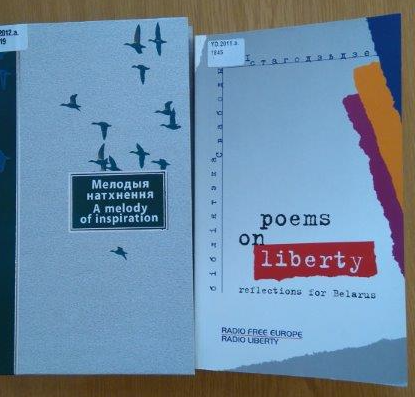 A passionate defender of human rights, Vera Rich translated from Russian manuscripts about Soviet censorship for The Medvedev papers by Zhores A. Medvedev (Nottingham, 1975; X.100/16205) and wrote an extensive chapter ‘Jewish themes and characters in Belorussian texts’ for The image of the Jew in Soviet literature: the post-Stalin period  (New York, 1985; 85/23477). For more than 20 years she was the Soviet and East European correspondent for the scientific weekly Nature. Her numerous contributions can be found in the archive.

Other articles on a variety of subjects appeared in The Lancet and Index on Censorship. She also translated poems from Polish, especially by Cyprian Norwid, Spanish (the poem Los puntos cardinales by Carlos Sherman; Minsk, 2000; YF.2008.a.37017), Old Icelandic and Old English.

Vera Rich was also an accomplished original poet in her own right. Her modestly-published poetry books are: Outlines (London:, 1960; 11351.g.1), Sonnetarium: a chapbook of sonnets (London, 1962; 011498.a.45), Portents and Images: A collection of original verse and translations (London, [1963]; 11303.i.49) and Heritage of Dreams. A sketchbook in verse of Orkney ([Kirkwall], 1964; X.909/5128). Examples of her short, witty poems are available on the site AllPoetry. She was a founder and editor (1962-1969 and again from 1998 until her death) of the poetry magazine Manifold (ZK.9.a.6262). It published not only high-quality original poetry but also translations from lesser-known languages. Amongst all these numerous activities Vera found a time to prepare literary events and perform with her enthusiastic friends for various occasions in different places. I particularly remember the inspirational programme “Ukraine: From Mazepa to Maidan” performed in Oxford in 2007 at the invitation of the Oxford Student Ukrainian Society.

I would like to finish my tribute to this extraordinary woman with her own poem written for the 80th birthday of the prominent Belarusian priest Father Alexander Nadson  in 2006 and published in the Festschrift Sontsa tvaio ne zakotsitstsa, i mesiats tvoĭ ne skhavaetstsa = Your sun shall never set again, and your moon shall wane no more: essays in honour of Fr Alexander Nadson on the occasion of his eightieth birthday… (Minsk, 2009; YF.2011.b.788) : 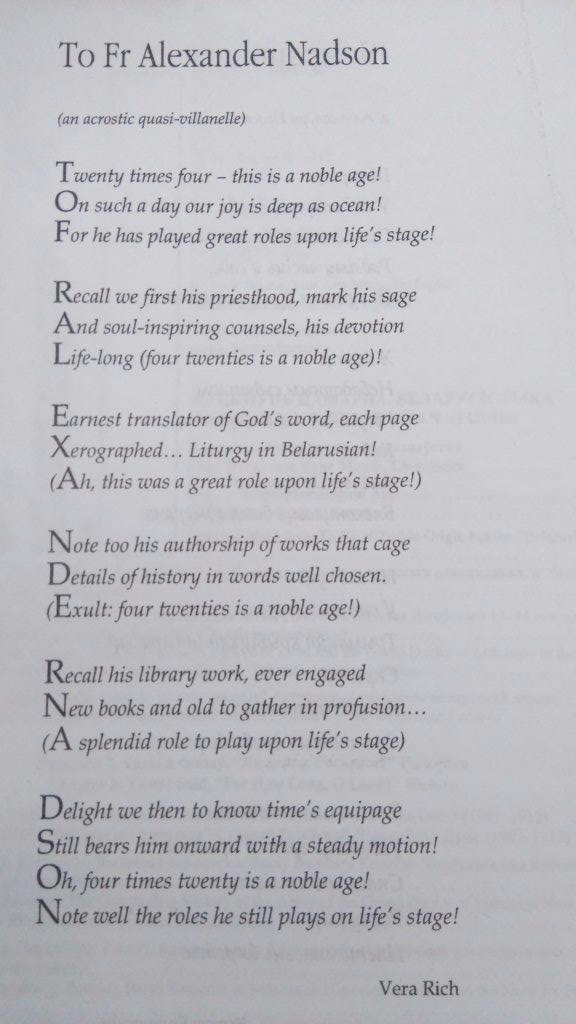