On 22 May 1866 a third child and second son was born to Leo Tolstoy and his wife Sophia. The little boy, christened Ilya, joined his elder brother Sergei and sister Tatyana in the nursery at Yasnaya Polyana, and was followed by ten more siblings, five of whom survived to adulthood. 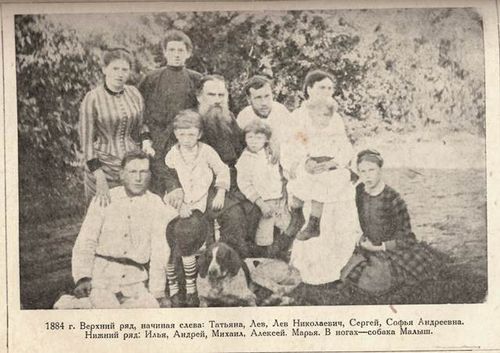 In a letter to a relative, written in 1872, Tolstoy described the characteristics of his six eldest children with objective frankness and unsparing attention to detail. He notes six-year-old Ilya’s robust good health, inventiveness and tender-hearted sensitivity, but also his indolence (‘fond of eating and lying still doing nothing’), hot temper and poor performance in the schoolroom. He records with foreboding, ‘Everything forbidden delights him; he recognizes it at once… If I die Ilya will come to grief, unless he has some stern guardian whom he loves to lead him by the hand.’ Tolstoy’s comments on his son’s lack of ability may well have arisen from his own efforts to teach him mathematics, Latin and Greek; later the Tolstoy children were also educated by tutors until 1881, when the family took a house in Moscow and Ilya was sent to a private gymnasium. His father had refused to sign the declaration of Ilya’s loyalty to the Tsar which was mandatory for admission to a state-run school, and his premonitions were fulfilled when Ilya left without graduating.

In fact, for the rest of his life Ilya Tolstoy proved to be something of a rolling stone, trying his hand at one career after another. After military service as an officer in the Sumy Dragoon regiment and marriage in 1888 to Sophia Filosova, he worked in a bank and then for an insurance company to support his family of five children before going in for journalism and founding the newspaper Novaya Rossiia in 1915. His assistance with his father’s relief work during the famine of 1891-92 developed his social and humanitarian conscience, and during the First World War he worked for the Red Cross. However, it was after leaving Russia for the USA in 1916 that he developed the new career for which he was to be remembered – as a writer and lecturer on his father’s life and writings. 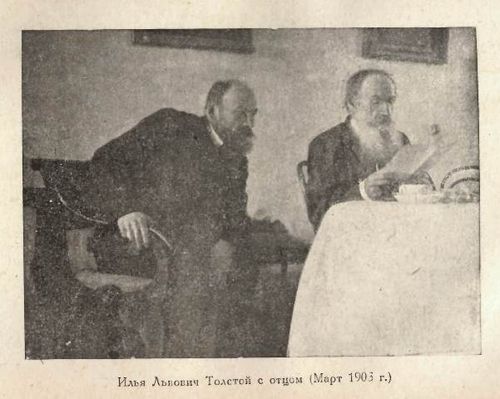 Ilya and his father in 1903. From Moi vospominaniia

After an initial lecture tour he went back to Russia, but quickly left again when the Bolsheviks gained power in 1917, divorced in 1918, and returned to the United States by way of Paris, settling in Connecticut with his second wife Nadezhda Perchina. Despite the popularity of his lectures, he was never solvent, and was reduced to pawning family heirlooms to keep afloat. However, he was in demand as a literary consultant and adaptor when in 1927 a film was made of Tolstoy’s novel Resurrection,  in which he even made a cameo appearance in the character of the Old Philosopher.

Tolstoy had died in 1910, and the bizarre circumstances of his death in the railway station at Astapovo after fleeing the family home in a final act of rejection, together with the unhappiness which marred his 48-year marriage, might lead readers to expect a chronicle of bitterness and discord from his son’s memoirs. In fact, though he includes descriptions of less than idyllic episodes from his childhood and adolescence, Ilya balances these with memories of his father performing as a dancing bear at a Christmas party, disguised in a coat with a fur lining turned inside out, taking his children riding and fishing, getting left behind by the steamer on a visit to Kazan, training his horses and dogs, and compiling case notes on the ‘patients’ at the ‘Yasnaya Polyana Lunatic Asylum’. He comments on the relatives and friends who provided features of various characters in Tolstoy’s novels, and describes the devotion with which his mother repeatedly copied out her husband’s frequently illegible manuscripts. 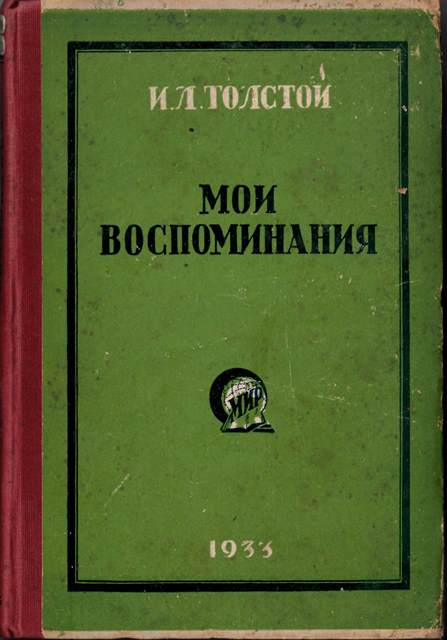 Cover of the 1933 edition of Moi vospominaniia

The memoirs, Moi vospominania, first appeared in 1914, and were translated shortly afterwards by George Calderon as Reminiscences of Tolstoy (London, 1914; 010790.g.50), the first of several versions in the British Library’s collections, which also include an edition of the Russian text published in Moscow in 1933, the year of Ilya’s death. He died in poverty on 11 December in New Haven, perhaps fulfilling some of his father’s misgivings about his lack of staying-power and application. However, he left behind an absorbing account, remembered when his other writings had lapsed into obscurity, which counterbalances Tolstoy’s claim in Anna Karenina that ‘all happy families are alike, but every unhappy family is unhappy in its own way’, and recalls scenes from family life like those of many other parents and children, less famous than the Tolstoys but united by similar experiences and emotions.