And yet the time will come: Ivan Franko in Memoriam

Ivan Franko (1856-1916), together with Taras Shevchenko and Lesia Ukrainka, is one of the three pillars of classical Ukrainian literature. His extraordinary life and enormous creative output are well described by Marko Robert Stech and Arkadii Zhukovsky in the Internet Encyclopedia of Ukraine with a very useful bibliography for researchers at the end:

With his many gifts, encyclopedic knowledge, and uncommon capacity for work, Franko made outstanding contributions to many areas of Ukrainian culture. He was a poet, prose writer, playwright, critic, literary historian, translator, and publisher. The themes of his literary works were drawn from the life and struggle of his own people and from sources of world culture: Eastern cultures and the classical and Renaissance traditions. He was a ‘golden bridge’ between Ukrainian and world literatures. 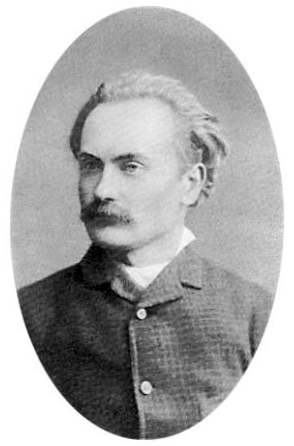 Ivan Franko in 1886 (From Wikimedia Commons)

The death of Ivan Franko on May 28 1916 was a great blow to the whole of Ukrainian society, then part of the Austro-Hungarian and Russian empires. He died in his beloved Lviv, amidst the horrors of the First World War, when  Ukrainians from both empires were fighting each other.  Soon after his funeral, through the efforts of his friends and especially Mykhailo Vozniak, the League of Liberation of Ukraine in Vienna published a book Pamiaty Ivana Franka. 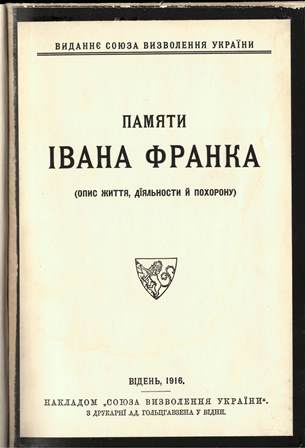 Cover of Pamiaty Ivana Franka (Vienna, 1916) 10790.v.6 (An electronic version of the work is available at: http://diasporiana.org.ua/wp-content/uploads/books/1021/file.pdf)

This rare book is part of our significant collection of works by and about Ivan Franko. It describes his funeral in Lviv, with speeches and reactions from all over the world. Rare photographs of the funeral are part of the book. 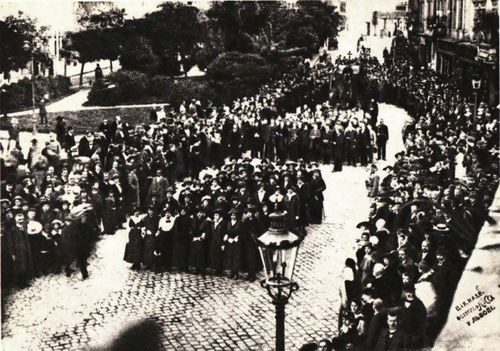 In 1932 the Canadian priest and translator Percival Cundy, before presenting his translations of selected poems into English in A Voice from Ukrainia, wrote in the biographical sketch:

In his great epic Moses, Franko puts these words into the mouth of the prophet and nation-maker of Israel as he surveys their tents from Mount Nebo, on whose peak he was soon to die:

As thou shalt through the centuries march,
Thou’lt bear my spirit’s stamp on thee

Franko could justly apply these words to himself in the relation to his own people, the Ukrainians of Galicia, for no man in modern times so profoundly influenced, spiritually and culturally, a nation than did he. 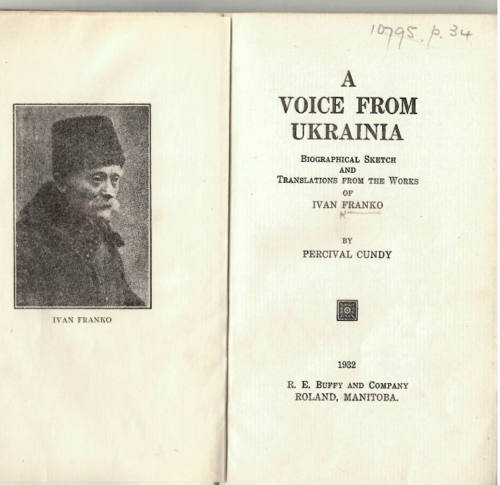 “The spirit’s stamp” of Ivan Franko was indeed so great that it could not be ignored even by the Soviet authorities. During Soviet times most of his works were published, with special emphasis on his radical activities (Franko was imprisoned three times for political activities) and early interest in socialism. The title of one of his poems, Kameniari  (‘Stonecutters’ ), was widely used when talking about him. Yet the process of re-interpretation of Franko started as early as the mid-1980s, and continues to this day. In her two studies, the literary critic Tamara Hundorova concentrates on the artistic aspects of Franko’s works instead of the usual ideological ones. The famous modern Ukrainian writer Oksana Zabuzhko and literary scholar Volodymyr Mazepa looked at his philosophical works, and a historian from Lviv, Yaroslav Hrytsak,  re-evaluated Franko as a scholar and important political figure in Galicia. New insights about Franko as a writer of criminal stories appeared in the book Ivan Franko – maister kryminal'noho chtyva (‘Ivan Franko as master of criminal stories’; Lviv, 2006; YF.2007.a.19860). 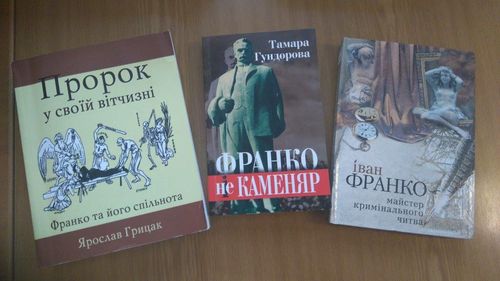 Some recent books about  Ivan Franko from our collections

More books, articles and PhD theses will be published this year marking the centenary of Franko’s death and 160th anniversary of his birth in August this year. I hope the year will also be marked by new translations of Franko’s works into English.  The famous British translator Vera Rich translated the poem Moisei ('Moses'), beginning with its famous  Prologue :

And yet the time will come and, radiant shining,
You’ll shake the Caucasus; one of the free nations,
With the Carpathians as your girdle twining.

You’ll set the mighty sound of freedom racing
Over the Black Sea, free-holder, well-seated,
In your own house, in your own fields’ broad spaces!

It resonates with all interested in Ukrainian studies 100 years after Franko’s death.