From Slapstick to Schlegel: Hamlet goes to Germany

Among the videos of performances in our current exhibition Shakespeare in Ten Acts is a puppet production of Der bestrafte Brudermord (‘Fratricide Punished’), a slapstick version of Hamlet. Its origins and its relationship to Shakespeare’s text are still matters of debate among scholars, but it seems to have been known and performed by travelling players in Germany from the early 17th century onwards.

German speakers who wanted to see Hamlet played in a formal theatre under Shakespeare’s own name had to wait until 1773 when the Court Theatre in Vienna put on a stage version by Franz Heufeld. This was based on Christoph Martin Wieland’s translation, the first attempt at a major translation of Shakespeare into German, covering 22 of the plays and published between 1762 and 1766 (8 vols, 11762.c.14.). However, although Heufeld’s Hamlet lacked the slapstick elements of Der bestrafte Brudermord, it still was hardly a faithful version of Shakespeare’s play.

Wieland’s translations were in fact not entirely complete or faithful. He made some cuts and, most notably, rendered the plays in prose, something that would give the young writers of the ‘Sturm und Drang’ generation an exaggerated idea of Shakespeare’s ‘naturalness’ compared to the formal verse of classical French drama. But Heufeld took much greater liberties cutting many characters and episodes and Germanising many of the names: Horatio becomes ‘Gustav’ and Polonius ‘Oldenholm’. The most surprising omission is the character of Laertes, leaving Hamlet nobody to duel with in the the final act. Instead, the Queen (neither Gertrude nor Claudius is named here) still drinks poisoned wine, but makes a dying confession of her own and the King’s guilt. Hamlet kills the King and is apparently left to become the new ruler of Denmark. 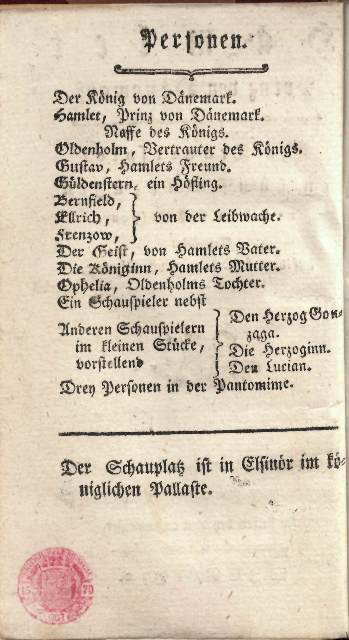 For all its infidelities, Heufeld’s Hamlet helped to start a boom in German productions of the play. The actor and theatre director Friedrich Ludwig Schröder saw a production in Prague which inspired him to prepare his own version. His translation follows Heufeld in many ways, but he restored Laertes to the action, although there is still no duel and Hamlet and Laertes are reconciled. 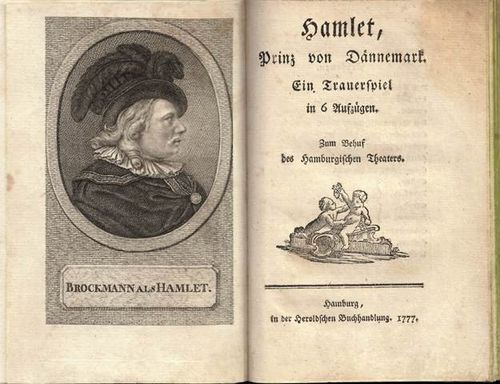 Title-page of the first editon of Schroder’s translation of Hamlet (Hamburg, 1777) RB.23.a.18775. The frontispiece shows Franz Brockmann as the Prince.

More radically, Schröder also restored the gravediggers’ scene, something generally frowned upon by critics and included only reluctantly by Wieland. However, although the scene appears in the first published edition of his translation, which is fleshed out to 6 acts in order to accommodate it, the gravediggers do not appear in the cast list printed there, so may not have made it into actual performances. Nor is the scene present in later published editions of Schröder’s translation. 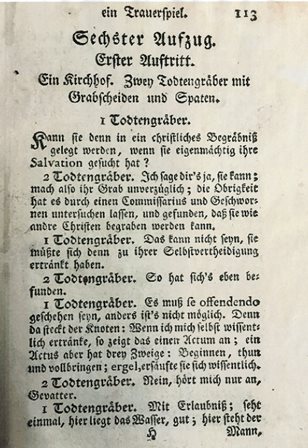 The opening of Schroder’s 6th act with the gravediggers

Schröder’s Hamlet was the sensation of the 1776 theatre season in Hamburg and made a star of Franz Brockmann who played the title role (Schröder himself played the Ghost). It added huge momentum to the interest in Hamlet sparked by Heufeld’s work. No doubt thanks to this early enthusiasm, as the German passion for Shakespeare grew over the following decades, a particular fascination for Hamlet and identification with the Prince himself became one of its hallmarks.

The British Library holds first editions of Wieland’s, Heufeld’s and Schröder’s translations. However inadequate they may seem today as renderings of the original, they played a key role in bringing Shakespeare and Hamlet to Germany, and helped to pave the way for Wilhelm Schlegel’s verse translation, first staged in Berlin in 1799, nearly a quarter of a century after Schroder's triumph in Hamburg.