One that got away. Daniel Urrabieta Vierge’s illustrations of Don Quixote (1906)

Curating an exhibition inevitably involves a process of selection or, better maybe, de-selection. Items are chosen to support a coherent narrative, but practical considerations inevitably supervene. The copy of a particular book may be in poor condition, too tightly bound to open safely, or its dimensions prevent the inclusion of other books, as one simply has too many. In the case of the edition of Don Quixote illustrated by Daniel Vierge and first published by Scribner’s in New York in 1906-7, this could be included in the British Library’s exhibition ‘Imagining Don Quixote’ only at the expense of two smaller volumes. This was regrettable as his illustrations are highly original and stand out from many of those produced in the 19th century.

Daniel Urrabieta Vierge (1851-1904) was born in Madrid, but spent all his working life in France. He had an active early career illustrating events in the Franco-Prussian War and the third Carlist War. He also produced illustrations for works by Victor Hugo. However, in 1881 he suffered a paralysis to the right side of his body, which also affected his speech. He then taught himself to draw with his left hand and his career resumed. 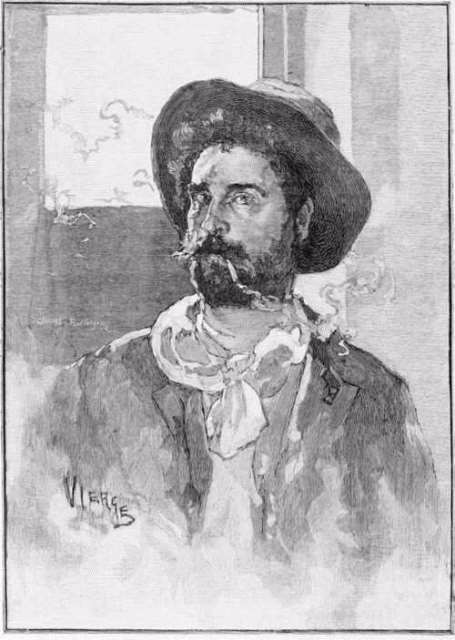 Daniel Vierge. Sketch by Himself, engraved by Clement Bellenger.

Vierge’s involvement with Spain and with Don Quixote extended over some 30 years and culminated in the Scribner’s edition of Thomas Shelton’s 17th-century translation two years after his death (the British Library holds an edition published in London in the same year by Unwin). His earliest illustrations of the novel appeared in an incomplete part-work edition, published in Paris in 1875. None of those illustrations appear to have been re-used in the 1906 edition.

Vierge travelled to Spain in 1893. In this he was following in the footsteps of Gustave Doré, who had been in Spain in 1855 and 1861 before producing his highly successful illustrations for the 1863 editon of Viardot’s French translation of Don Quixote. Vierge executed a number of watercolours that were then used to illustrate the account of the Spanish journey of his friend, August F. Jaccaci.

Some of Vierge’s many watercolours and ink wash drawings were re-worked in pen and ink as a basis for the engravings of his edition of Don Quixote. The use of the new photogravure process permitted greater fidelity to the artist’s original and a finely detailed result. This is especially evident in the image of the preliminaries of the joust – which then never actually took place – between Don Quixote and the Duke’s lackey, Tosilos (Part II, ch. 56). 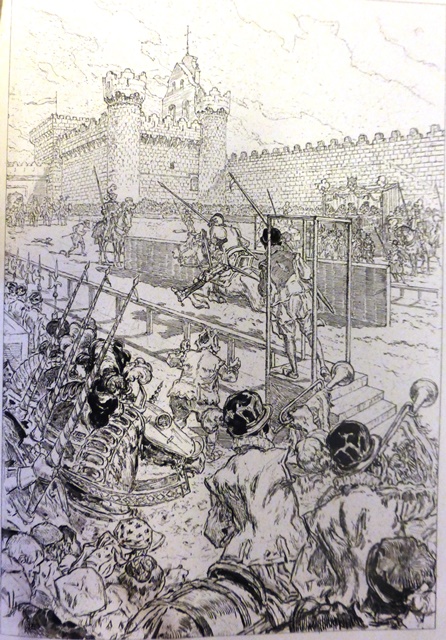 Preparing for the joust, Vierge’s illustration from Miguel de Cervantes, The History of the Valorous and Witty Knight-Errant Don Quixote of the Mancha … (London, 1906-07). Tab.538.a.9

Another feature of Vierge’s illustrations is the impression that they create of a real, lived-in world, as in the drawing that appears in the preface of the Scribner’s edition (below). 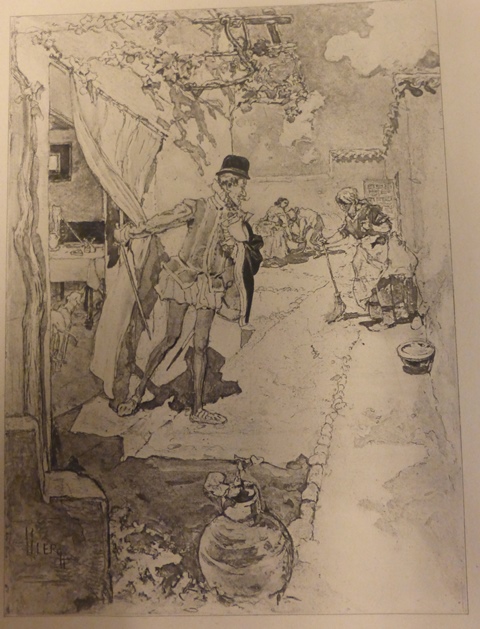 The picture shows Don Quixote at home, with his housekeeper, his niece and the odd-job man (Don Quixote, I, ch. 1). His greyhound can be seen behind the curtain.

Vierge’s travels in rural Spain gave him access to a world which had changed little from the time of Cervantes.

Miguel de Cervantes, The History of the Valorous and Witty Knight-Errant Don Quixote of the Mancha, translated by Thomas Shelton; the illustrations by Daniel Vierge… (London, 1906-07). Tab.538.a.9

August F. Jaccaci, On the trail of Don Quixote: Being a Record of Rambles in the ancient province of La Mancha (London, 1897.) 10161.de.30, and available online.