The Bard, the Bear and Bohemia: Shakespeare and the Czechs

Travelling home from a screening of the recent Kenneth Branagh /Judi Dench Winter’s Tale in Oxford, I overheard a conversation between two other passengers who had also attended it. ‘Were there really bears in Bohemia?’ one of them was earnestly asking her neighbour, referring to one of Shakespeare’s most famous stage directions as Antigonus meets his fate: ‘Exit, pursued by a bear’. We could, of course, have debated this and concluded that it was indeed entirely possible that Antigonus might have encountered such a creature in the territory which we now know as Bohemia, but that would have missed the point. As soon as Antigonus addresses the Mariner who has brought him to this desolate spot to abandon the infant Perdita on his king’s instructions, it is clear that we have been transported beyond the realms not only of Leontes’ Sicilia but of reality itself: ‘Thou art perfect, then, our ship has touched upon / The deserts of Bohemia?’

This glaring geographical error – attributing a sea-shore to the landlocked territory of Bohemia – has frequently been cited as an instance of Shakespeare’s ignorance of Central European topography, and provided Derek Sayer with the title for his study of the Czech lands, The Coasts of Bohemia: a Czech history (1998; YC.2000.a.2603). Attempts have even been made to suggest that ‘Sicilia’ is a mistaken substitute for ‘Silesia’ – though this only compounds the mystery of why Antigonus would need to travel by sea to another area with no coastline.

Instead, we might do better to consider the growth of Shakespeare’s reputation in the real Bohemia and the contribution which he made to the development of theatre within Czech culture, from the earliest translations and imitations to the growth of the Prague Shakespeare Company and Summer Shakespeare Festival.

Fittingly, The Winter’s Tale was performed as part of the entertainments surrounding the wedding of James I’s daughter Elizabeth to Frederick, the Elector Palatine, in 1613. Six years later, life would imitate art as the young princess did in reality become Queen of Bohemia when her husband ascended its throne. However, the title of the play was tragically applicable to their situation, as the reign of the ‘Winter King’ and his consort lasted only a few brief months before they went into exile. These events raised awareness of Bohemia and its place in European politics with the outbreak of the Thirty Years’ War, and it is possible that plays by Shakespeare were performed by the members of an English company which visited Bohemia in 1617 and again in 1619-20, though concrete evidence that Shakespeare’s works were known there cannot be found before the later years of the century. 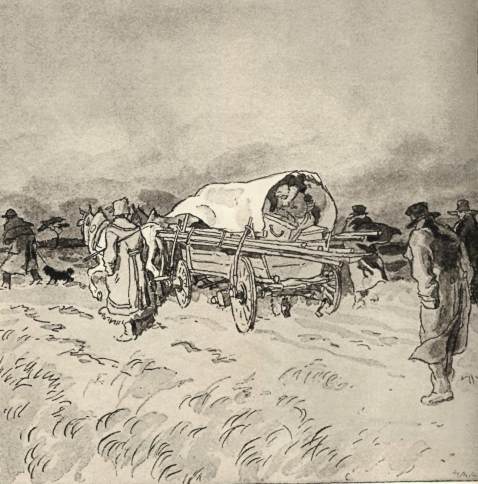 A Czech travelling theatre of the kind that took Shakespeare to audiences around the country until the late 19th century. Picture by  by Adolf Kaspar, reproduced in Miroslac Kačer & Mojmír Otruba Josef Kajetan Tyl (Prague, 1959) British Library 10601.y.6.

However, in the course of the 18th century the permanent stage theatre gradually arrived in Prague, with the opening of the V Kotcích theatre in 1738 and the Estates Theatre  (Stavovské divadlo) in 1783. Performances there were usually in German or, in the case of opera, Italian, but in 1786 the Bouda (or ‘Shed’), a wooden theatre, was constructed in Wenceslas Square. Here audiences could see regular performances in Czech, including two plays published in 1786 by Karel Hynek Thám – adaptations of Schiller’s Die Räuber and Shakespeare’s Macbeth, followed in 1791-92 by Hamlet and King Lear. 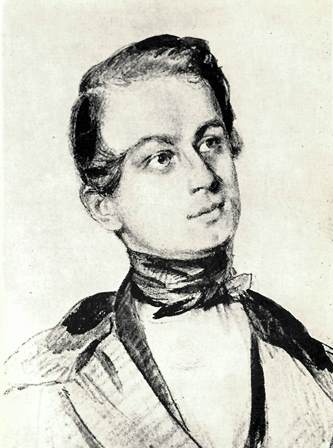 The bad luck traditionally associated with the ‘Scottish play’ did not appear to affect the Bouda – if one discounts the fact that the theatre was knocked down after only three years – or halt the growing enthusiasm for Shakespearean drama. The poet Karel Hynek Mácha was an enthusiastic amateur actor and joined the dramatic society founded by Josef Kajetan Tyl which performed at the Cajetan theatre in Malá Strana (1834-37), including plays by Shakespeare in its repertoire. Other major literary figures of the 19th century were also profoundly influenced by Shakespeare. Josef Jiří Kolár (1812-96) translated a number of Shakespeare’s plays (Hamlet, Macbeth, and The Merchant of Venice; 11762.bbb.25), while Jan Neruda (1834-91) drew on his writings as a rich source of quotations and references to support his own opinions. Like other members of the ‘May generation’ (Májovci) he prized the optimism and vigour which he saw in Shakespeare’s writings, and frequently reviews performances of his plays in his capacity as a drama critic. Although he did not learn English until much later, he was already reading translations of Shakespeare as a schoolboy in 1851, when only four published examples in Czech existed (Macbeth, The Comedy of Errors, Othello  and Romeo and Juliet). As a journalist, he used Shakespearean phrases to upbraid the Old Czech members of the National Assembly whom he felt were betraying the country’s interests by their lassitude and torpor. 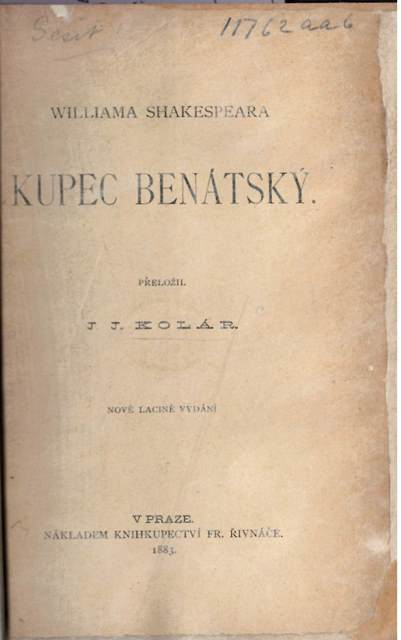 The timeless relevance of Shakespeare’s works provided an invaluable resource in times of political and ideological repression, allowing writers to use his plots and characters as a means of commenting on contemporary situations. Vladimír Holan (1905-80), unable to publish his poetry in print, reflected in Noc s Hamletem (‘A Night with Hamlet’, 1964; X.908/5000) on the paradoxes and uncertainties of human and political existence in a work which would become the most translated poem in Czech. Similarly Václav Havel (who launched the Summer Shakespeare Festival at Prague Castle in 1990) returned to play-writing after many years when his energies had been claimed by his political duties with Odcházení (‘Leaving’, 2007; YF.2008.a.17785), in which he acknowledged the influence of King Lear in his portrayal of ex-chancellor Vilém Rieger’s reactions to the crisis which follows his relinquishment of political power.

Shakespeare’s ‘Bohemia’ may not exist on any map, but in a broader sense it does not have a sea-coast because it is also without boundaries and frontiers. It is a single part of a limitless world which claims as its citizens all those who prize the power of words to inspire, to portray the human predicament and to bring together people of every language and nation.

The British Library's current exhibition Shakespeare in Ten Acts  is a landmark exhibition on the performances that made an icon, charting Shakespeare’s constant reinvention across the centuries and is open until Tuesday 6th September 2016. A study day, ‘All the World’s a Stage’ on 10 June will look at Shakespeare’s cultural presence in Europe and the Americas.