The 'Shakespearomania' of Karl Marx

Karl Marx’s magnum opus Das Kapital (Hamburg, 1872; C.120.b.1.) may have a reputation as an exceedingly dry and difficult book (causing William Morris to suffer acute ‘agonies of confusion of the brain’ in his reading of the great critique of political economy), but the toil is lightened by his frequent and often comic allusions to classical and European literature, from Aeschylus to Cervantes and Goethe.

His favourite though was always Shakespeare. Eleanor Marx, Karl’s daughter, described Shakespeare’s works as the Bible of the household, ‘seldom out of our hands and mouths’, and the German socialist biographer of Marx Franz Mehring pictured the whole family as practising ‘what amounted practically to a Shakespearian cult’. Marx reportedly read Shakespeare every day, and the family would entertain themselves on the walk back from their regular Sunday picnics on Hampstead Heath by dramatically reciting extracts from Shakespeare’s plays.

Marx’s friend and collaborator Friedrich Engels, co-author of the famous Communist Manifesto (London, 1848; C.194.b.289), displayed a similarly fierce passion for the bard in a letter to Marx, with characteristic invective, after the German dramatist Roderich Benedix  criticized Shakespeare’s overwhelming popularity:

That scamp Roderich Benedix has left a bad odour behind in the shape of a thick tome against ‘Shakespearomania.’ He proved in it to a nicety that Shakespeare can't hold a candle to our great poets, not even to those of modern times. Shakespeare is presumably to be hurled down from his pedestal only in order that fatty Benedix is hoisted on to it… 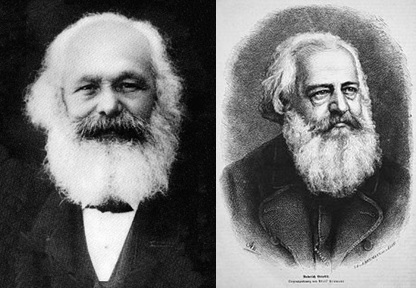 Marx and Benedix: United by the beard, divided by the bard. (Images from Wikimedia Commons)

Much has been written of Marx's use of the ‘old mole’ from Hamlet as a metaphor for revolution in The Eighteenth Brumaire of Louis Bonaparte (for an interesting discussion of this theme see the article by Peter Stallybrass cited below), but also noteworthy is Marx’s repeated use of a passage from Timon of Athens which, he says, shows how ‘Shakespeare excellently depicts the real nature of money’:

Gold? Yellow, glittering, precious gold?
No, Gods, I am no idle votarist! ...
Thus much of this will make black white, foul fair,
Wrong right, base noble, old young, coward valiant.
... Why, this
Will lug your priests and servants from your sides,
Pluck stout men’s pillows from below their heads:
This yellow slave
Will knit and break religions, bless the accursed;
Make the hoar leprosy adored, place thieves
And give them title, knee and approbation
With senators on the bench: This is it
That makes the wappen’d widow wed again;
She, whom the spital-house and ulcerous sores
Would cast the gorge at, this embalms and spices
To the April day again. Come, damned earth,
Thou common whore of mankind, that put’st odds
Among the rout of nations. 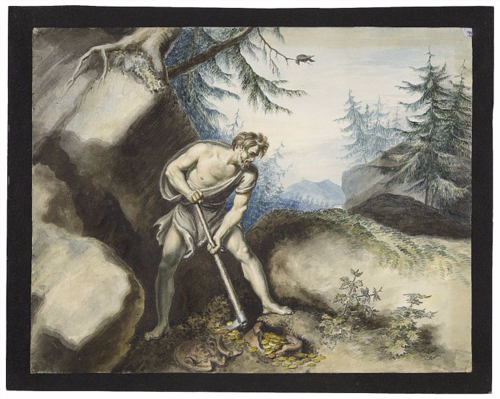 Many literary critics have written interpretations of Shakespeare from a Marxist perspective, and several prominent commentators on Shakespeare (like George Bernard Shaw and Bertolt Brecht) drew on Marxian ideas in their understanding of his body of work. The Russian revolutionary Leon Trotsky, unusually steeped in European literary culture for a Bolshevik, sought to explain what was so interesting about Shakespeare to Marxists:

In the tragedies of Shakespeare, which would be entirely unthinkable without the Reformation, the fate of the ancients and the passions of the mediaeval Christians are crowded out by individual human passions, such as love, jealousy, revengeful greediness, and spiritual dissension. But in every one of Shakespeare’s dramas, the individual passion is carried to such a high degree of tension that it outgrows the individual, becomes super-personal, and is transformed into a fate of a certain kind. The jealousy of Othello, the ambition of Macbeth, the greed of Shylock, the love of Romeo and Juliet, the arrogance of Coriolanus, the spiritual wavering of Hamlet, are all of this kind…

For Trotsky, Shakespeare represents the birth of modern literature by placing the individual man, his own personal desires and emotions, in the centre of the narrative, symbolizing the equally progressive and destructive aspirations for personal emancipation characterizing the bourgeois revolt against feudalism. After Shakespeare, he writes, ‘we shall no longer accept a tragedy in which God gives orders and man submits. Moreover, there will be no one to write such a tragedy.’