A Full Circle around Shakespeare

The Russian national poet Alexander Pushkin is often called ‘the Shakespeare of Russia’. For Pushkin, Shakespeare represented an art that was in tune with the ‘spirit of the age’ and put the people at the centre of the concept of the world. Pushkin admired the ‘truthful’ presentation of Shakespeare’s characters, as although they were part of the grand scale of historical events, they were captured by the playwright as individuals.

In 1825, just before the Decembrist uprising, Pushkin wrote the tragedy Boris Godunov ‘according to the system of our Father Shakespeare’. Set in Russia at the end of the 16th and beginning of the 17th centuries, when the Rurik dynasty terminated with the death of Tsar Fedor Ioanovich, who inherited the throne after his father Ivan the Terrible, the play is focused on the problem of the struggle for power and responsibility for it. Being Fedor’s brother-in-law and having de facto ruled instead of him for a number of years, Boris Godunov is ‘appointed’ tsar. In Pushkin’s tragedy Boris is shown as an ambitious but competent ruler who feels remorse for allegedly giving orders to kill a child – Tsarevich Dmitrii, Fedor’s younger brother and legal heir. In the last months of his life Boris has to deal with claims to the Russian throne made by an imposter claiming to be Dmitrii, who had apparently miraculously survived the assassination. Boris dies suddenly in the midst of political turmoil, but his son and heir Fedor II becomes a victim of this ‘False Dmitrii’. The play ends with Fedor’s death while the False Dmitrii is ascending the throne. The full circle of the power struggle is completed, and ‘the people are silent’ – the words with which Pushkin chose to end his play.

By dramatizing the historical power struggle Pushkin referred to the current state of play and the political situation in Russia, and it is not surprising that the play was not published until 1831 (with a print run of 2000 copies) and first performed only in 1870. 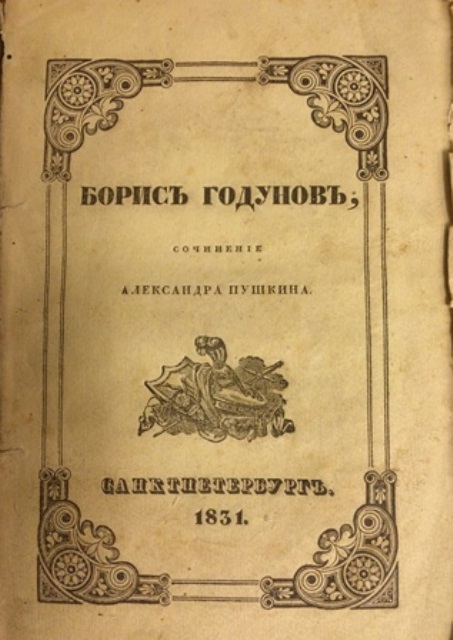 The British Library copy has its own fascinating history. It comes from the famous collection put together by Serge Diaghilev (1872-1929)  in the last years of his life. Most of Diaghilev’s books were bequeathed to his friend and protégé Serge Lifar, who then sold the collection at auction in 1975. The Diaghilev copy was acquired by the Library for 12,000 francs (= £ 1,333.19).

It is interesting to note that Diaghilev normally did not mark his books. Lifar did so inconsistently, but on this copy one can see his stamp and a label for the exhibition “Pouchkine 1837-1937” (Paris,  Salle Pleyel, 16 March-15 April, 1937), organised by S. Lifar. 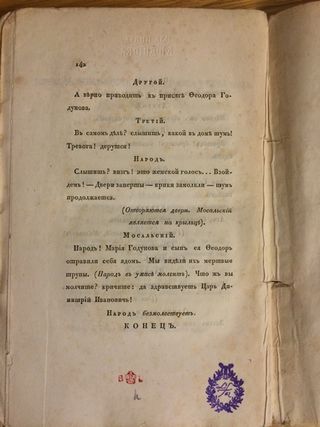 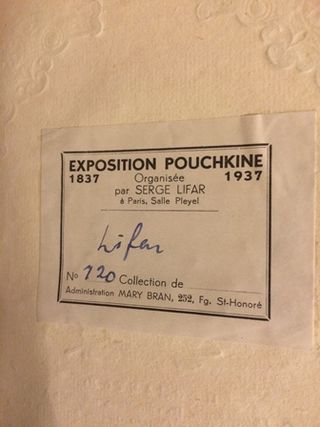 Before Diaghilev owned it the book was part of a collection of 3,500 items assembled by Vladimir Nikitich Vitov, an economist and member of the Moscow Bookplate Lovers Society. 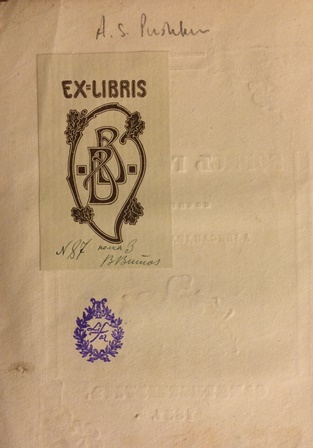 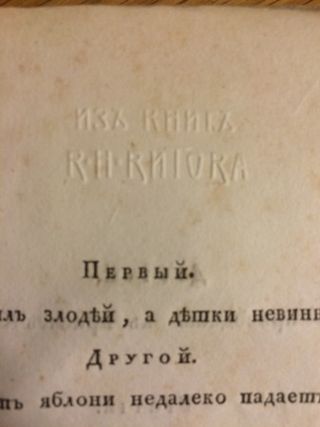 His ownership stamp was designed by the graphic artist Vladimir Belkin (W. Bielkine) (1895-1966), who was at some point close to the circle around Serge Soudeikine (1882-1946), an artist and set-designer associated with the Ballets Russes and the Metropolitan Opera. Belkin left Russia in 1918, travelled around Europe, and in the late 1920s settled in the Netherlands. Some of his theatre designs for Dutch companies are now held in the Theatre Museum in Amsterdam.

To wrap up my pretty random stream of associations, I would just say that of course one of these productions that Belkin designed in Holland was The Comedy of Errors by William Shakespeare. Through the history of the book we made a full circle, and the tragedy of a medieval power struggle turned into our favourite comfortable and funny comedy. It is life, I hope.