All the World’s a Stage: Shakespeare in Europe and the Americas

On Friday 10 June, the British Library welcomed a host of expert speakers to discuss the global understanding of our ‘national’ poet. And it turns out Shakespeare is the poet of many nations. It would be impossible to do justice to the richness of the presentations in a blog post, yet all of our panels shared the fundamental idea that Shakespeare’s writing is at the heart of every culture. Adaptations and translations are not so much secondary to the original but offer a radically different entry into, and a potentially much more direct access to, a Shakespeare play that will always signify something particular to different nations in different social and temporal contexts.

Prof. Jerzy Limon (photo below) opened proceedings with a view into the establishment of the Gdańsk Shakespeare Theatre, designed by Renato Rizzi, at once a huge black modernist edifice in stark contrast to the red brick Northern European architecture (its 90 tonne retractable roof opens fully in 3 minutes), and a gothic castle-like structure, alluding to the city’s mediaeval Bazylika Mariacka.  We saw videos of the theatre’s opening ceremony and of varied productions, showing how the space can be adapted to both traditional Elizabethan stage design and experimental avant-garde interpretations. 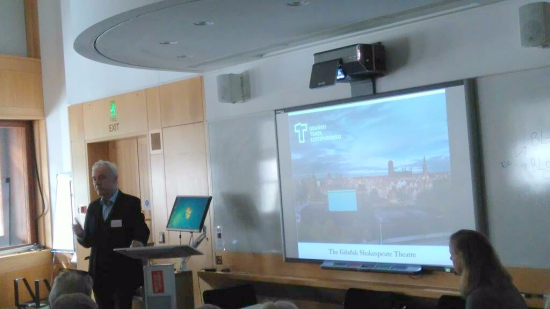 Stuart Gillespie and Graham Holderness offered us insights into the sources and settings of Shakespeare’s plays. Dr Gillespie explained how French and Italian were the languages of culture and how European (mainly Italian) sources – epics, essays (Montaigne’s predominantly), romances and novellas – were in the atmosphere around Shakespeare’s time and were inevitably absorbed and adapted in his works. Professor Holderness spoke of the ‘reciprocal relationship’ between Shakespeare and Venice and how the playwright had already created much of the myth around the city before it was (re-)created in 19th and 20th century literature.

The British Library’s Julian Harrison gave us a glimpse of the ‘Our Shakespeare’ exhibition currently at the Library of Birmingham, home to the second largest Shakespeare collection in the world. The collection was resurrected after a fire destroyed the old library building in 1879 and the collection was soon expanded thanks to donations from around the world. Julian highlighted the beautifully produced photo album of German Shakespeare scholars (1878), the photo album donated by Laurence Olivier, and a Russian edition of Romeo and Juliet presented by a Soviet delegation at the height of the Cold War. Julian also managed to show the importance of Warwickshire to the bard, just before the study day moved to more tropical climes.

Philip Crispin opened the afternoon’s proceedings with a rousing presentation on Une tempête (‘A Tempest’). In this ‘adaptation for a black theatre’, Aimé Césaire, one of the founders of négritude, recasts Ariel as a mulatto slave and Caliban as an articulate black slave in revolt, reflecting the racial politics of his native Martinique. Michael Walling, Artistic Director of intercultural, multimedia theatre company Border Crossings, presented an insider perspective of staging Shakespeare in India, and translating and staging Dev Virahsawmy’s Toufann, a Mauritian adaptation of The Tempest, in London. The linguistic choices made by both writer and translator in the case of Toufann were fascinating: the play is written in Mauritian creole, but the title is in Hindi – Prospero is from the dominant Indian diaspora community in Mauritius, and seeks to impose this new word into the play. Philip and Michael showed how these two postcolonial adaptations of The Tempest epitomise translation as creative interpretation. 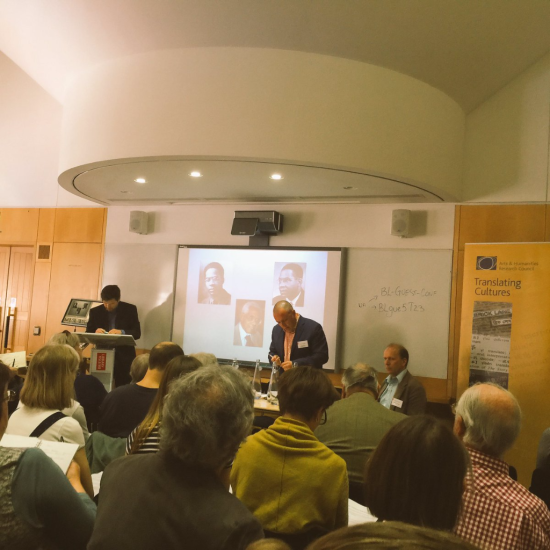 From considering just three performances, Paul Prescott encouraged us to look at hundreds in his whirlwind road trip presentation across the United States. The phenomenon of the Shakespeare festival was plain to see in the sheer spread and eclectic formats of these festivals. The bard’s work is not just made for the Globe Theatre but is at home anywhere and perhaps more at home in the small and distant communities of the American West. The day’s underlying theme again: Shakespeare is accessible universally. The idea was explored further by Mark Burnett, who showed how a constant industry of Shakespeare adaptation in film across Europe and South America sees in the plays stories that apply to a vast array of national settings, from gypsy versions of Hamlet (Aleksandar Rajkovic, Serbia, 2007) and King Lear (Romani Kris – Cigánytörvény, Bence Gyöngyössy, Hungary, 1997), to a Brazilian Romeo and Juliet set in the favelas of Rio (Maré, Nosse Historia de Amor, Lucia Murat, Brazil, 1997). 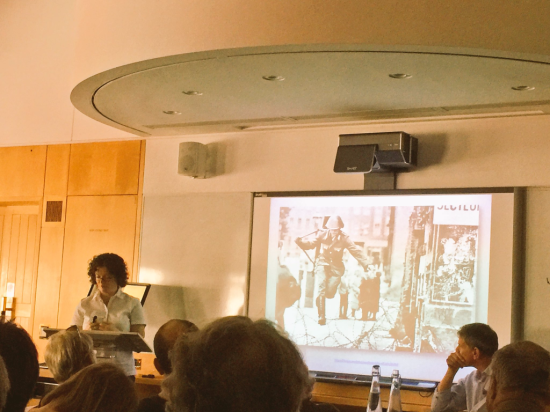 The day concluded with a round table on the ‘cultural politics of European Shakespeare’. Aleksandra Sakowska talked about the long history of interaction between Poland and Shakespeare, a presentation which touched on the first black actor to play Othello in Britain, Ira Aldridge. Nicole Fayard drew our attention to Shakespeare’s relevance in modern French society from the Vichy regime to the Charlie Hebdo attacks, showing how even in the latter situation Shakespeare managed to force his way into public consciousness. Keith Gregor described how Shakespeare productions in Spain still far outnumber those of the Spanish Golden Age playwrights, and how, after Franco’s reign, Shakespeare began to be appropriated by Spain’s autonomous communities in overtly political avant-garde productions. Emily Oliver presented a view of Shakespeare around the time of German reunification, particularly through the challenging production of Hamlet/Machine in 1990, directed by Heiner Müller (photo above by Ben Schofield). Hamlet could be seen building and jumping over a wall on stage in a not-so-subtle allegory of the political context. Erica Sheen chaired the discussion that followed which situated Shakespeare as the most significant figure of international cultural exchange and at the heart of every nation’s self-expression. Shakespeare gives voice to political counter-currents and his work is continually adapted to inhabit alternative, minority, and simply ‘foreign’ positions.

Final panel of the seminar. Photo by Ben Schofield

‘All the world is a stage’ begins Jacques’s monologue in As You Like It, and this study day left no doubt that will always be true for Shakespeare’s work.

This study day, organised by the European and Americas Collections department of the British Library, was supported by the AHRC ‘Translating Cultures’ Theme, the Polish Cultural Institute and the Eccles Centre for American Studies at the British Library.