‘As a novel there is nothing like it ever again…’: Benjamin Constant’s Adolphe (1816)

‘Her subject was Adolphe, a short novel about failure’. These words occur in Providence (London, 1982; British Library H.84/692), a novel which might possibly be described in the same terms, by the British novelist Anita Brookner, who died in March 2016, shortly before the bicentenary of the publication of Benjamin Constant’s Adolphe in June 1816.

One of our recent posts noted the Russian dramatist Aleksandr Ostrovsky’s struggle to convince the censor that the figure of a tyrannical mother-in-law in his play The Storm did not represent Nicholas I. When Adolphe first appeared, Constant found himself embroiled in similar efforts to persuade his readers that he had not written a roman à clef based on his own turbulent affair with Germaine de Staël. The parallels were so close that his protestations in the press went largely disregarded. 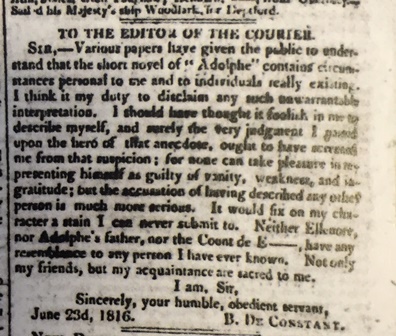 Constant’s letter about the interpretation of Adolphe, sent to various newspapers (here as printed in the London Courier of 25 June 1816)

The figure of Adolphe himself – the cultured, privileged and melancholy son of a government minister – resembles Constant both in personality and in his troubled relationship with his father, also a government minister. His mother had died within days of his birth, and at the age of four the young Benjamin was removed from his grandmother’s care and placed in that of a hated governess, whom his father secretly married, and a succession of singularly unpleasant tutors. His studies continued at the universities of Erlangen and Edinburgh, and were followed by an appointment in 1788 as Kammerjunker (Gentleman of the Chamber) to the Duke of Brunswick.

Infuriated by the stultifying pettiness of court life and his wife Minna’s equally unsympathetic attitude to his intellectual pursuits, Constant separated from her in 1793 and left Brunswick the following year, when he also met Madame de Staël. By 1795, having overcome her initial resistance, he established one of Paris’s most brilliant salons with her. Its members sought to establish a government based on the moderate and rational principles which represented the approach of the Revolution’s most able thinkers, but with Napoleon’s coup d’état of November 1799 and Constant’s election to the Tribunal he had little emotional energy left to deal with Germaine’s increasingly possessive and unbalanced behaviour and the melodramatic scenes which ensued when he hinted that the relationship had run its course. After a visit with her to Germany in 1803 where they met Goethe, Schiller and Wieland, he renewed his relationship with Charlotte von Hardenberg, whom he later married after some years of tacking back and forth between ‘l’homme-femme’ Germaine and the calm and gentle Charlotte. 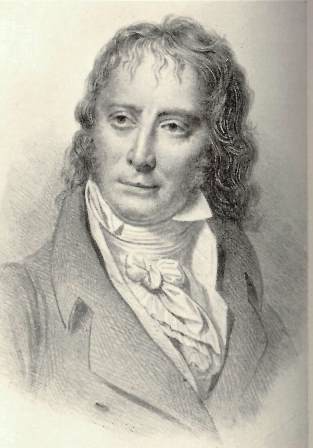 It was in 1806, the year when he and Charlotte began their affair, that Constant started work on Adolphe. His marriage in 1809 was followed by a final break with Madame de Staël in 1811, and in 1815, during Napoleon’s ‘hundred days’ before the final defeat at Waterloo, Constant accepted a post as his adviser. Following the fall of the Emperor, Constant spent several months in England (January to July 1816), where he gave readings of Adolphe at London salons. He was probably impelled by his lack of funds to publish the novel, which came out in London and Paris in June, with a framing correspondence between the ‘finder’ of the manuscript and its publisher to diminish the danger of readers identifying the author with Adolphe and Madame de Staël with the heroine, Ellénore. On his return to Paris, he was elected to the French parliament in 1819 and, until his death in 1830, enjoyed a brilliant political career supporting liberal causes such as Greek independence and the abolition of slavery. 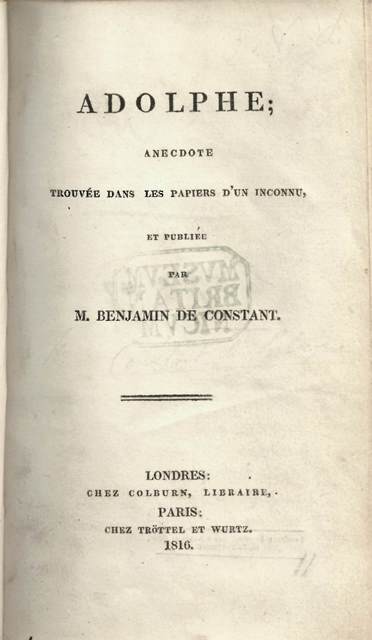 For a comparatively short text (228 pages in the first edition ), the novel has inspired considerable critical discussion. Adolphe, aged 22 and having recently graduated from Göttingen, joins the court of an enlightened German prince and becomes involved with the Polish refugee Ellénore, ten years his senior and the mistress of the Comte de P***. Originally begun as an exercise in seduction, the relationship becomes a folie à deux which isolates them from society and threatens to ruin Adolphe’s career. Even after her break with the Comte and abandonment of her two children, the emotional pressure is only increased by Adolphe’s awareness of the sacrifices which Ellénore has made for him and the intransigence of his father, who drives her from his home town. Although they find a refuge on Ellénore’s restored Polish estate, a friend of Adolphe’s father coerces him into abandoning her in the interests of his career, and the shock of discovering Adolphe’s letter promising to do so causes a shock which leads to her fatal illness. In the aftermath of Ellénore’s death Adolphe remains in a state of almost Existentialist despair: ‘j’étais libre en effet; je n’étais plus aimé: j’étais étranger pour tout le monde’, an ‘outsider ‘ as isolated and alienated as Camus’s Meursault. Having longed for his lost freedom, he now regrets the claims and ties (liens) which had previously seemed so irksome to him.

The critic Dennis Wood in his study of Adolphe (Cambridge, 1987; YC.1988.a.7619) describes the novel as ‘the paradox of a German Novelle written in French’, with strong links to the 17th-century French moraliste tradition of La Rochefoucauld and the roman d’analyse represented by Madame de Lafayette’s La Princesse de Clèves. Poised on the shift of consciousness between the eighteenth and nineteenth centuries, it recalls the perceptive comment which Anita Brookner, herself an expert on Romantic art, offers in her character Kitty Maule’s tutorial on Adolphe: ‘for the Romantic, the power of reason no longer operates. Or rather, it operates, but it cannot bring about change’.