From Deluge to the Digital: Fifty Years of Research and Conservation in Florence since the 1966 Flood.

On 27 June the Italian Studies Library Group’s annual lecture will be held at the British Library. Here the speaker, Dr Donal Cooper, introduces its subject, the Florence flood of 1966.

The majority of today’s visitors to Florence surely do not notice the modest plaques dotted around the city’s streets, set well above head height, marked with a simple horizontal line and bearing the same standard legend: “Il 4 novembre 1966 l’acqua d’Arno arrivò a quest’altezza”. Florentine history is peppered by repeated floods of the Arno – at once the silvery river, the “Arno d’argento”, of popular song and Dante’s “accursed ditch” – but 1966 was the highest and most violent. The grim hierarchy is inscribed on the corner of Via San Remigio, where the 1966 plaque stands well clear of the 14th-century inscription marking the 1333 flood. The human toll in 1966 is generally accepted as 101 fatalities, compared to the several thousand that are thought to have perished in 1333. The devastation wreaked on the city’s historic centre, artistic heritage, archives and libraries was severe and captured the attention of the international media. 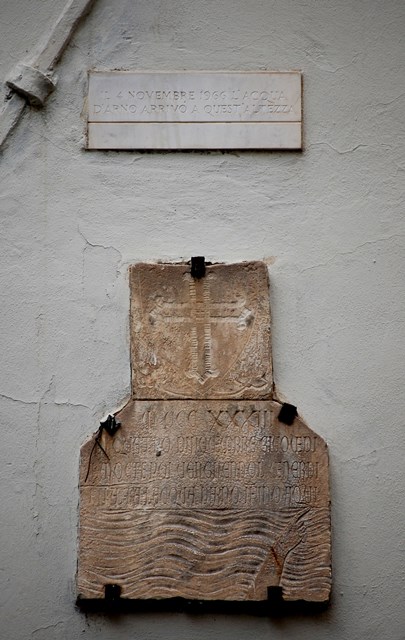 This autumn marks a half century since the 1966 flood. Commemoration is more muted than the events staged for the 40th anniversary in 2006, a sign perhaps that the first-hand experience of the flood is gradually slipping from the city’s collective memory. Arguably, however, the flood remains central for understanding today’s Florence, for the catastrophe forced a new appreciation of the city itself as an historic artefact, with buildings and books, archives and artworks as an integrated and ultimately fragile whole. The scale and urgency of the conservation challenges in the flood’s aftermath also led to new approaches in the conservation of books, sculpture and paintings, areas where Florence has since developed world-leading expertise.

In my lecture I will return to the days of the flood as captured in photography, film – most notably Franco Zeffirelli’s Florence: Days of Destruction voiced by Richard Burton – and other contemporary testimonies as the so-called “angeli del fango” salvaged Florence’s past from the toxic mud. Beyond the immediate experience of the catastrophe, I also consider the international collaborations that were established with unprecedented speed in its wake to address the needs of the city’s libraries and museums. Both the Florentine Archivio di Stato, then located on the ground floor of the Uffizi, and the city’s Bibilioteca Nazionale, facing the river in the low-lying Santa Croce district, were badly affected. Well over a million books in the Biblioteca Nazionale had been submerged and the library became the focus of the British Italian Art and Archives Rescue Fund’s efforts in Florence. Historic books had to be carefully dried, unbound, washed folio by folio, resewn and rebound. The quantity of material and multinational personnel necessitated new procedures for standardising and prioritising the conservation effort, innovations that can now be seen to have had significant influence internationally. 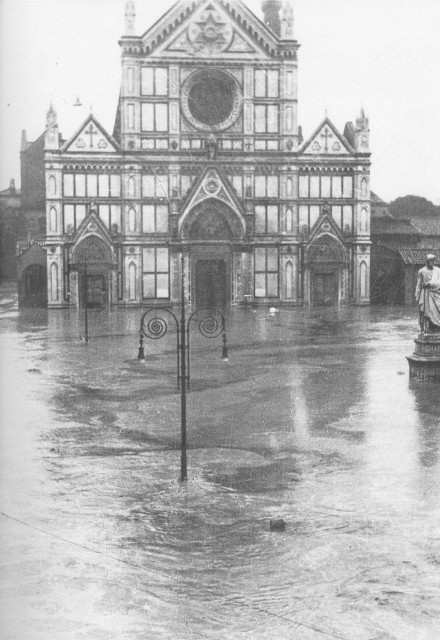 Numerous paintings and artworks were damaged, the great Franciscan basilica of Santa Croce being particularly badly hit. In response, new laboratories for the conservation of paintings were established in 1967 at the Fortezza da Basso, the vast and previously vacant sixteenth16th-century fort that became a hub of activity in the wake of the flood. Known since 1975 as the Opificio delle Pietre Dure (so named after the hard-stone workshops established by the Medici during the Renaissance), this institute now leads the world in the conservation of historic panel paintings and frescoes. Its most iconic flood-related project was the great crucifix by Cimabue from Santa Croce, restored using the ‘chromatic abstraction’ method. Cimabue’s cross became the international face of the ongoing conservation effort as it toured a number of international venues, including London’s Royal Academy in 1983. The Opificio’s work – which has since broadened beyond projects associated with the 1966 flood – has been especially important for our knowledge of Italian panel painting, transforming scholarship on Giotto through its conservation of the artist’s Santa Maria Novella cross, unveiled in 2001.

To mark the 50th anniversary of the flood, the Opificio with help from the Getty Trust are completing one of the most difficult conservation challenges bequeathed by the waters of November 1966: Giorgio Vasari’s vast Last Supper from the Museo dell’Opera at Santa Croce, whose five poplar panel boards were submerged for over 12 hours. The project has a digital dimension in the form of a virtual reconstruction of the original setting for which Vasari painted the image in 1546.

This project and a number of similar initiatives bring the story into the digital present, but the application of new technologies still draws on the legacy of the flood, especially the awareness in the face of destruction of the full scope of the city’s heritage and records, which has consolidated the sense of Florence as a unique laboratory for historical research, as well as a city of art and culture.

Conservation legacies of the Florence flood of 1966 : proceedings of the Symposium commemorating the 40th anniversary, edited by Helen Spande. (London, 2009). m10/.26687. 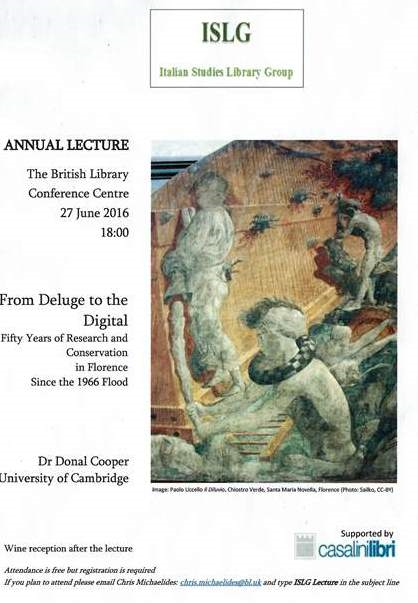