Shakespeare’s Hamlet has been filmed on numerous occasions, but surprisingly the version which many of the world’s greatest Shakespearean actors consider to be the finest of all was performed not in the original English but in Russian. In the 1964 film Gamlet, directed by Grigorii Kozintsev with a score by Dmitrii Shostakovich, the Prince of Denmark was played by Innokentii Smoktunovskii, whose account of the role was acclaimed by Sir Laurence Olivier.

The translation of Hamlet used for the film was by the poet Boris Pasternak, and dated from 1940. At this time restrictions on artistic freedom led him to confine himself largely to translation, and knowing that if he were to have any hope of seeing it performed in the Stalin era he would have to modify the plot, he suppressed certain tragic aspects of the play. The obvious parallels between the corruption rife in Elsinore (‘something is rotten in the state of Denmark’) and the equally pernicious political and moral climate of the USSR allowed him at the same time to point up the likenesses between them in a form of subtle commentary, and this appealed to Kozintsev, whose Hamlet is the antithesis of the generic heroes of socialist realism. His letters to Pasternak reveal, often at his own risk, the vision which he sought to present in an age of rigid and paralysing censorship. 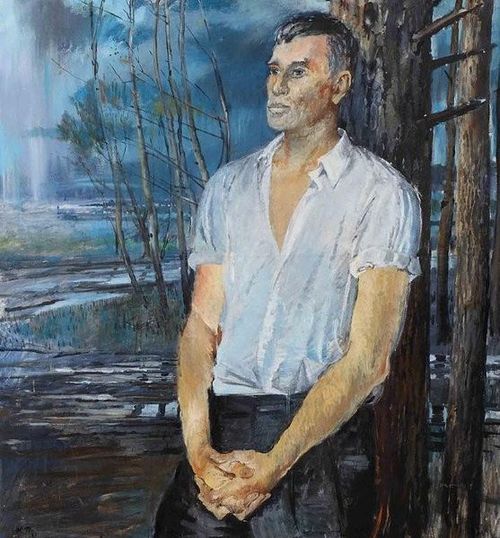 Translations of Shakespeare into Russian had fallen foul of the authorities ever since Nikolai Karamzin’s version of Julius Caesar was banned for political reasons in 1794 and Wilhelm Küchelbecker translated Macbeth and a selection of the history plays in prison following the Decembrist revolt of 1825. Although it was not until 1865-68 that the first complete Russian translation of Shakespeare’s plays appeared (11764.i.6), his works proved a powerful influence on authors throughout the 19th century from Pushkin to Turgenev, whose Hamlet and Don Quixote (1860) described the decline of the ‘Hamlets’ of the 1840s into scepticism and egoism which rendered them incapable of fighting evil. A notable exception, however, was Tolstoy, whose contempt for Shakespeare led him to remark to Chekhov ‘You know, I cannot stand Shakespeare, but your plays are even worse’.

Pasternak, though, had been inspired and fascinated by Shakespeare from the time when he first began to write. His first collection of poems Sestra moia-zhiznʹ (‘My Sister Life’, 1917; the BL has a 1922 edition, X.908/25229.) includes ‘English Lessons’, in which the figures of Desdemona and Ophelia sing their lives away, while at the other extreme of his creative life his ‘novel in prose with a supplement in verse’, Doktor Zhivago (Milan, 1957; YF.2007.a.31460), concludes with a sequence of poems purportedly written by the hero. One of these, ‘Hamlet’, expresses the existential loneliness of the solitary figure who pleads, like Christ, for the cup of his inexorable fate to pass away from him, and concludes,

But the plan of action is determined,
And the end irrevocably sealed.
I am alone; all round me drowns in falsehood:
Life is not a walk across a field.

In the first issue of the almanac Literaturnaia Moskva (1956; W.P.13695), Pasternak also published an essay entitled ‘Translating Shakespeare’ (an English translation is included in his autobiography I Remember (Cambridge Mass., 1983) X.950/34754) which provides valuable insights into his working methods and perspectives on the eight plays which he translated: Hamlet, Romeo and Juliet, Antony and Cleopatra, Othello, Henry IV (I and II), King Lear and Macbeth. Although he acknowledges the ‘inward and outward chaos’ which shocked Voltaire and Tolstoy in Shakespeare’s blank verse, he suggests that his poetry derives its strength from its abundant and disorderly nature. He analyses the use of rhythm to characterize individual figures, comparing it to a musical leitmotif, whereas he claims that in Romeo and Juliet music plays a negative part. While some of his assessments may be controversial, as when he describes Antony and Cleopatra as ‘the story of a rake and a temptress’, they are never glib or hackneyed. Above all, he allows the reader access to the translator’s mind as he ‘finds himself reliving the circumstances of the author’ and being drawn into his secrets through experience. 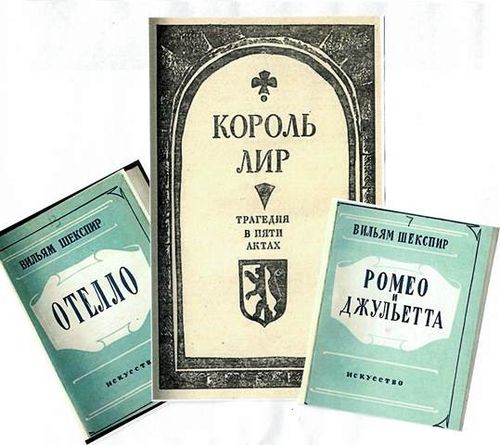 Translations of Othello, King Lear and Romeo and Juliet by Pasternak from the British Library’s collections

Pasternak’s translations in their turn inspired other artists. The composers Sergei Prokofiev, Sergei Slonimskii and Rodion Shchedrin drew on them for settings of Shakespeare’s words and incidental music for the plays, bringing Cleopatra, King Lear and Hamlet to life in new guises. This was especially fitting as Pasternak, himself a gifted musician, compared tragedy and comedy in Shakespeare to the minor and major keys in music, and the transitions between poetry and prose to musical variations.

Though brief and epigrammatic, the essay contains messages about Shakespeare’s dramas which are still fresh and challenging today. Pasternak places him firmly within the European tradition as ‘the father and prophet of realism’, a major influence on Pushkin, Goethe and Victor Hugo, and the predecessor of Chekhov and Ibsen. He roundly rejects the hypothesis that Bacon could have written the plays, detects a Dostoevskian spirit in Macbeth, which ‘might well have been called Crime and Punishment’, and claims that productions of King Lear are ‘always too noisy’. On the one hand, he compares the milieu of Shakespeare’s early years in London with the Tverskoy district of Moscow in the mid-19th century, with its ‘troikas, publicans, gipsy choirs and educated merchants who patronized the arts’, appropriating him for a Russian public; on the other, he emphasizes his timeless universality, as ‘so great an artist must inevitably sum up everything human in himself'.