Delacroix, Shakespeare and the London Stage in 1825

29 June 1855. Othello. Pleasure sublime and total; the tragic force, the succession of scenes and the gradual build-up of interest fill me with an admiration which will bear fruit in my mind. I saw once again that same Wallack whom I saw in London exactly thirty years ago (and maybe to the day, for I was there in June) in the role of Faust. Seeing that play which, however altered, was extremely well arranged, gave me the idea of doing my lithographs.  Terry who played the devil was perfect.  (Eugène Delacroix, Journal, I, 917-918)

Eugène Delacroix never forgot his experience of the London stage in the summer of 1825.  Seeing James William Wallack in a performance of Othello in Paris in 1855 transported him back 30 years to the many evenings which he had spent at the theatre during his three-month stay. As he indicates in this journal entry, an adaptation of Goethe’s Faust by George Soane and Daniel Terry entitled The Devil and Dr Faustus that he saw at Drury Lane, with Terry playing Mephistopheles and Wallack as Faust, inspired his famous series of 18 lithographs, published as illustrations to Albert Stapfer’s translation of Faust in 1828. The British Library has a fine copy of this important work, considered one of the jewels in the history of the illustrated book. 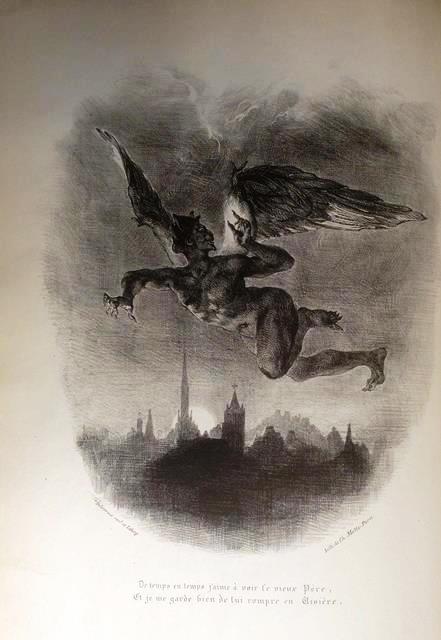 But Delacroix’s stay in London was especially filled with Shakespeare. His interest in Shakespeare had begun long before, perhaps in connection with his friend Charles-Raymond Soulier, who as the son of émigrés had been raised in London and later gave Delacroix English lessons. In 1819 Delacroix had attempted a translation of Richard III which at the time he considered one of Shakespeare’s best plays for showing ‘the tallent of the author in the living painting and investigation of secret motions of human heart’ (Lettres intimes, 84-85). Given the poor quality of his English, it is fortunate that he gave up translating and read Shakespeare largely in Letourneur’s French translation, published in 1821 (British Library 840.f.2-8). But seeing Shakespeare played live on stage sparked a fascination that would become one of the most prominent elements of Delacroix’s art and thought: dozens of paintings and prints on Shakespearean subjects, and a lifetime of reflecting on what Shakespeare represented for the history of art and aesthetics — for concepts such as realism, the sublime, unity, beauty and naturalness.

The London stage in 1825 was a heady mix of sublimity and melodrama. On the one hand, one could attend a play nearly every evening and see actors who have since entered the annals of Shakespearean performance – Edmund Kean, Wallack, Charles Mayne Young, Daniel Terry. On the other hand, productions often altered the originals, performances were rowdy and the plays were paired with vaudeville-like pastoral ballets, pantomimes and musical farces.

The British Library’s collections of playbills and theatrical journals allow us to identify what and whom Delacroix saw. Frequenting the two main theatres of the time – Drury Lane and the Theatre Royal, Covent Garden – he went to openings of Richard III on 20  June, with Kean as Richard and Wallack as Henry, The Tempest on the 22nd with Young in the role of Prospero, Othello on the 25th with Kean as Othello and Wallack as Iago and The Merchant of Venice on 2 July with Kean as Shylock and Wallack as Bassanio. 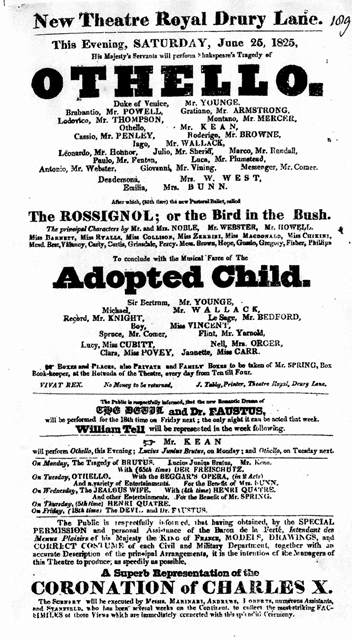 Playbills for the performances that Delacroix saw of Othello (above; Playbills 21, p. 204) and The Merchant of Venice (below; Playbills 100, p. 210) Although he missed Hamlet with Young in the title role on 27 June, the resemblance of Delacroix’s Macbeth, in his 1825 lithograph, to illustrations of Kean in this role suggests that he saw Kean play Macbeth on the 30th. 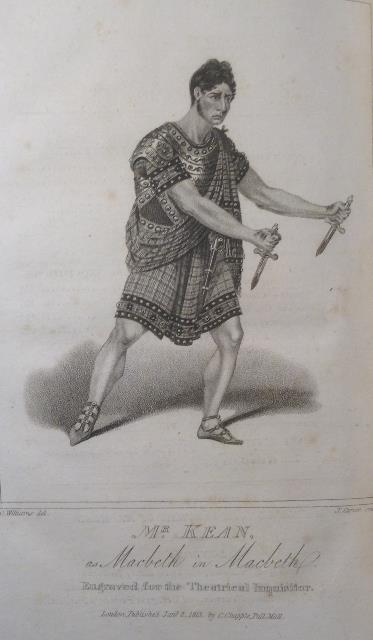 Like Byron and Keats, Delacroix was very impressed by the passionate, expressive and sensational Kean, especially in the role of Shylock, which he called ‘admirable’. Contemporary prints show that a drawing of Delacroix’s bearing the date of the performance of The Merchant of Venice (2 July) indeed represents Kean in this role, despite a false annotation, with the elopement of Lorenzo and Jessica suggested in the background. 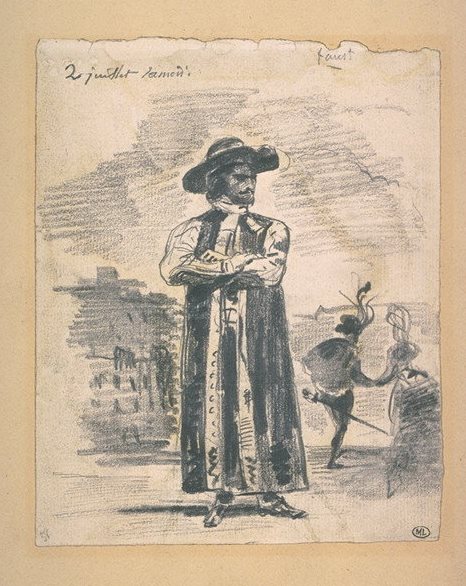 Kean was then at the height of his fame, popularity and indeed notoriety. In January he had gone through a very public trial for adultery which had seen him pilloried in the Times for immorality and had inspired riotous reactions – by both opponents and supporters – in the theatres. The irony of his playing the seemingly aggrieved husband Othello provoked especially raucous responses: the Morning Post (29 January 1825) reported ‘Kean forever’ banners in the gallery, groans and hisses in the pit, so much shouting that Wallack (as Iago) could not be heard and so much interruption that many speeches had to be dropped; the manager came onstage to calm the uproar, and Kean himself offered to withdraw (to cries of ‘No!, No!’).

By the time of Delacroix’s visit the scandal had abated somewhat, but Kean continued to have a highly emotional relationship with his audience: the Richard III that Delacroix attended was the Kean’s first appearance after a long absence and the papers report the rapturous applause and cries of appreciation that, in the curtain calls, kept him from being heard. Of his Othello on the 25th the Theatrical Observer gushed, ‘There is a grandeur of conception, a boldness of execution, and an overpowering reality of tenderness which we are quite unable to withstand’ (27 June). Kean’s acting itself had an electrifying, terror-inspiring quality such as Delacroix had never previously seen. 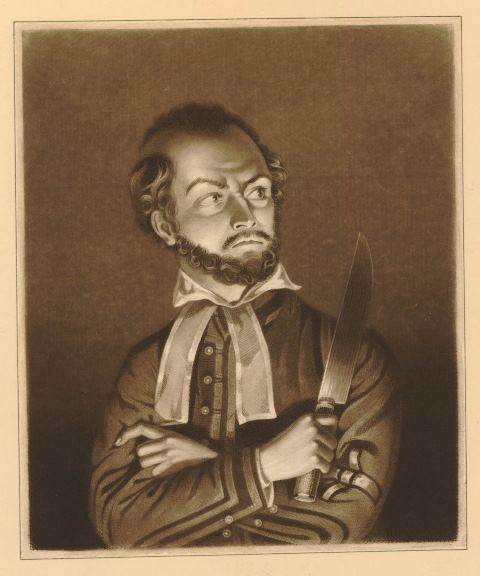 Henry Meyer after Walter Henry Watts, Kean in the character of Shylock, mezzotint, 1814.  © The Trustees of the British Museum (Creative Commons license)

The London plays seem to have led Delacroix immediately to some first attempts at Shakespearean subjects: in addition to the Shylock drawing and the Macbeth lithograph, he painted a Desdemona and Emilia based on Othello.

In the following years, he painted over 30 works on episodes from Shakespeare, notably from Hamlet, Antony and Cleopatra, Romeo and Juliet, Othello and Macbeth.  He also produced an important series of lithographs from Hamlet (1843) of which the British Library has a full set of the second edition (Paris, 1864; 1872.c.28).