Of all the fortnightly pieces which Paul Jennings (1918-89) wrote for the Observer between 1949 and 1966, few are funnier than ‘Babel in the Nursery’, collected in Golden Oddlies (London, 1983; X.958/20513). Glancing at the translations of Beatrix Potter’s works listed on the jacket on one of her books, Jennings reflected on the role of translators (‘heroes or fools’) in opening up the ‘transcendentalized English village’ set firmly in the Cumbrian countryside to young readers throughout the world. Even the characters’ names undergo changes which transform their bearers into very different figures: ‘Sophie Canétang , a Stendhal heroine … the awful Mauriac Famille Flopsaut … Noisy-Noisette, the Mata Hari of the twenties, as depicted by Colette … Tom Het Poesje, a kind of Dutch Till Eulenspiegel … Il Coniglio Pierino, the swarthy Sicilian bandit.’

Today, as we celebrate the 150th anniversary of Beatrix Potter’s birth, we may well admire the ingenuity of translators in tackling these challenges and giving her works to the children of the world in multilingual versions, many of which appear in the British Library’s catalogues. 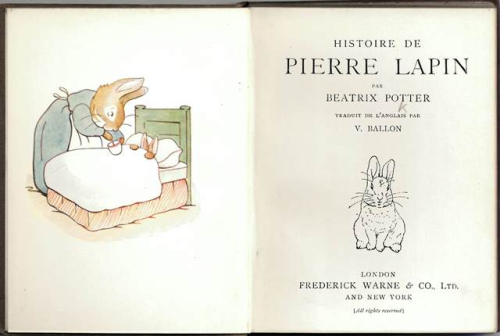 The French translator Victorine Ballon was one of the first to attempt the task of presenting Peter Rabbit in a new guise. Her Histoire de Pierre Lapin was the first of several versions of Potter’s works in French, followed by Histoire de Jeannot Lapin (London, [1921]; 12800.a.56), translated in collaboration with Julienne Profichet, as were Histoire de Poupette-à-l’épingle (London, [1922]; 12800.a.57) and Histoire de Sophie Canétang (London, [1922]; 12800.a.54). While Peter’s cousin Benjamin Bunny was rechristened as the typically French Jeannot, Jemima Puddle-Duck presented more of a problem. Ballon’s clever solution combined ‘caneton’ (duckling) and ‘étang’ (pool), preceded by a first name recalling the French idiom ‘faire sa Sophie’, aptly suggesting the prim old-fashioned airs of Potter’s Jemima. 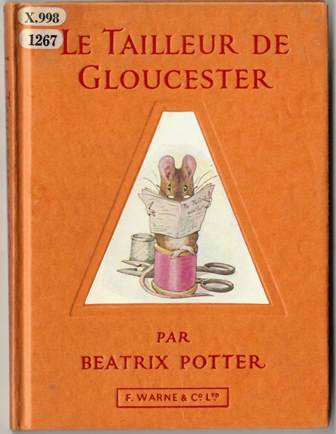 Young readers in Germany were soon able to enjoy Potter’s tales too with the appearance of Die Geschichte des Peterchen Hase, translated by Clara Röhn and Ethel Talbot Scheffauer (London, [1934]; 12800.a.69.). Before long Peter had been joined by his relatives the Flopsy Bunnies in Die Geschichte der Hasenfamilie Plumps, translated by Hildegarde M. E. Marchant (London, [1948]; 12830.e.15), imagined by Paul Jennings as ‘a lesser version of the Krupp dynasty, an endless succession of stern characters extending the family factories in the Ruhr’. When the same translator set to work on The Tale of Mr. Tod, she found a more straightforward solution, replacing the Cumbrian dialect word for a fox with a name recalling the mediaeval beast epic and Goethe’s Reineke Fuchs in Die Geschichte von Herrn Reineke. 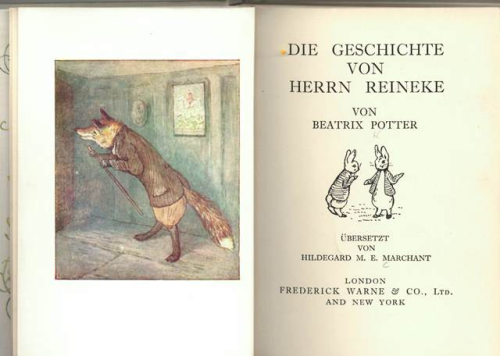 Translations into  Italian, Spanish, Dutch and Swedish also followed, issued, like the French and German ones, by Potter’s London publisher, Frederick Warne. Slavonic languages were slower to follow suit, and none are to be found in the British Library’s holdings, presumably because Warne did not publish any. But alongside the more familiar Western European languages, some surprises can be found. Who, for example, is mevrou Kornelia Kat, sunning herself on the stoep as she waits for her guests to join her for tea? Why, it is none other than Mrs. Tabitha Twitchit, mother of Tom Kitten (now Gertjie Kat – short for Gerhardus) and his sisters Pootjies and Oortjies (Mittens and Moppet), mysteriously transported to the veld in an Afrikaans translation by Louise Promnitz (Cape Town, 1970; X.990/4885). The disobedient kittens come to grief after an encounter with the Puddle-Ducks: ‘meneer Hendrikus Plassie-Eend’, Rebekka and Meraai – Jemima in the South African identity which she retains in her own story, Die Verhaal van Meraai Plassie-Eend, also translated by Promnitz (Cape Town, 1971; X.990/4883). Indeed, some of the earliest translations in the British Library’s collections are those into Afrikaans by Antoinette Elizabeth Carinus-Holzhausen, dating from the 1930s, where Benjamin Bunny features under a new alias in Die Verhaal van Bennie Blinkhaar (Pretoria, 1936; 12800.a.64) and Mrs Tittlemouse in Die Verhaal van Mevrou Piefkyn (Pretoria, [1936]; 12800.a.66). Peter had already pipped them to the post in Die Verhaal van Pieter Konyntjie (London, [1930]; 12800.a.65). 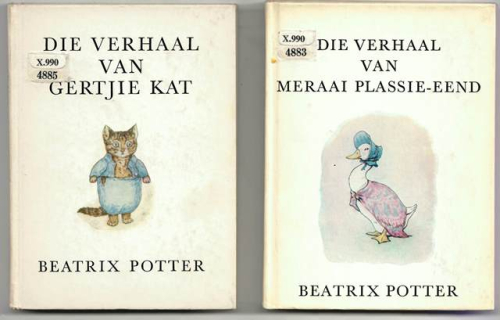 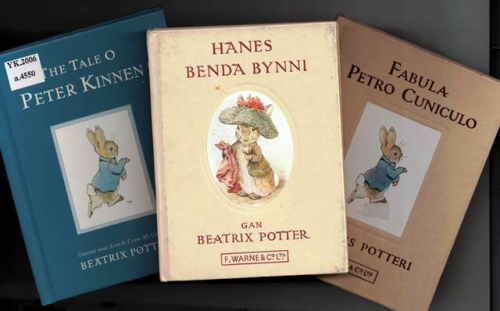 Some of Potter’s characters in (l.-r.) Scots, Welsh and Latin

Though her marriage to William Heelis was childless, Beatrix Potter had a great love of her many young friends and correspondents (several of the books began as illustrated letters), and would no doubt have been delighted that her work was available to readers throughout the world. She never condescended in her use of language or compromised in the artistic quality of her illustrations for children’s books (C.S. Lewis, for example, in his autobiography Surprised by Joy ([London], 1959; 4921.cc.28), recalled those to The Tale of Squirrel Nutkin (London, 1903; Cup.402.a.5) as epitomizing the essence of autumn for him as a boy). On her 150th birthday, she would surely have wished to celebrate the efforts of those who had helped her creations to travel, like Pigling Bland, ‘over the hills and far away’.