'A Lifelong Touchstone': Delacroix and Shakespeare

Shakespeare was a lifelong touchstone for the painter Eugène Delacroix’s reflections on art. This was first inspired by the French Romantics’ espousal of Shakespeare as a ‘modern’, his drama, passion, lyricism, crudity, mix of genres and swings of dramatic mood seeming, to the generation of the 1820s, a refreshing counterweight to the symmetry, restraint, understatement and generic absolutism of French neoclassicism. Soon after his visit to London in 1825, he drafted notes on the beautiful in which Shylock, Caliban, Iago and Gloucester – characters in the very plays that he had seen there – serve as models of the power and beauty of ostensibly repulsive characters, a trait which he compares to the paintings of Rembrandt (Journal, 1476). But Shakespeare remained with Delacroix long after the Romantic vogue of the 1820s. Right up to the end of his life he thought about Shakespeare: in his very unevenness, his mix of tragic and comic, Shakespeare transmitted, in Delacroix’s view, a powerful sense of the real, and developed the passions and the action in such a way as to create a logic or unity more natural than the false conventions of neoclassicism (Journal, 893-94, 25 March 1855). He believed that Shakespeare’s characters seem to us individuals rather than abstract types: when Hamlet, amid declaiming about his grief and his plans for vengeance, starts joking with Polonius or amusing himself instructing the players, he behaves with the changeability and impulsiveness of someone we know in the world, not with the coherence and conformity of a fictional character (Journal, 893, 25 March 1855). Although Delacroix painted neither of these scenes, he did depict the similar episode of Hamlet’s bantering with the gravedigger in Hamlet Act V, scene i. Shakespeare taught him that ‘life’ was a primary element of beauty (Journal, 1479). 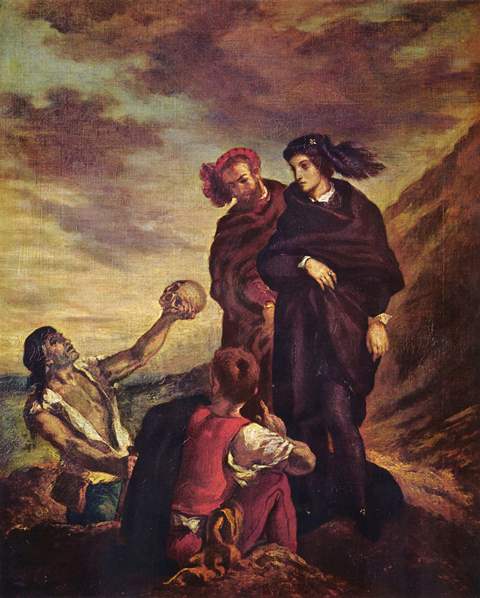 Delacroix stated repeatedly that this quality was unique to Shakespeare and that imitators never succeeded. ‘Shakespeare has an art completely his own’, he wrote in 1857 (Journal, 1074); ‘Shakespeare has a genius proper to himself’ (Journal, 1225, 23 February 1858). One wonders how this most ‘Shakespearean’ of artists, as Delacroix was frequently characterized in his lifetime, thought of his own activity as a prolific interpreter of Shakespeare. For this activity did not subside. Indeed,  an 1855 performance of Othello, which reminded him of his London stay, did, as he predicted, ‘bear fruit in his mind’, sparking a renewal of interest in Shakespeare in his final years: He he filled a sketchbook with drawings from the performance and later painted a Death of Desdemona, left unfinished at his own death. 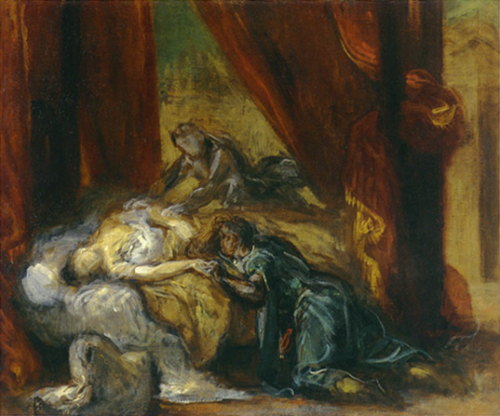 In 1860 he Delacroix reread Antony and Cleopatra and noted quotations from it in his journal; he had already treated the subject of Cleopatra and the Peasant from this play three times, including a stunning version from 1838. Also in 1860 he drew up a long list of subjects from Romeo and Juliet, a play from which had previously drawn just two paintings 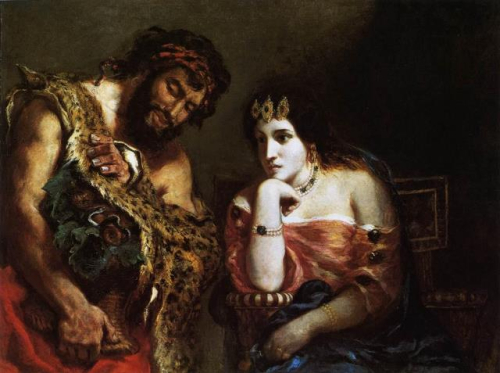 In 1863, when a new staging of Jules Lacroix’s verse translation of Macbeth (Paris, 1840; 11764.p.36) relaunched the public debate in France about Shakespeare – whether he could be adequately translated, how he should be staged, how he related to French ideas of ‘taste’ – Delacroix, despite his failing health, followed it closely, praising the translation and discussing the production with a friend (Journal, 1409, 17 April 1863). In one of the last notes in his diary, he is still thinking about Shakespeare’s force, the clarity of his intentions and the grand scale of his creations, qualities which ensure, in his view, that aspects shocking to the French, such as the mixture of comic and tragic, seem right, whereas they fail utterly in works by lesser writers (Journal, 1410, 4 May 1863).

In this year in which London has hosted major exhibitions of on Delacroix (National Gallery, closed 22 May) and Shakespeare (British Library, 15 April-6 September), it is worth recalling that France’s foremost interpreter of the bard was a painter whose vision was profoundly affected by his experience of the London stage in 1825.