The popularity of Shakespeare’s plays in France in the 1840s can be gauged by the fact that two albums of Shakespeare illustrations, Eugène Delacroix’s Hamlet, and Théodore Chassériau’s Othello,were published within a few months of each other, in 1843 and 1844. Though now considered to be masterpieces, the initial critical response to both publications was generally negative. Delacroix’s work was compared unfavourably to his earlier Faust illustrations (Paris, 1828; British Library 1875.b.9.) while Chassériau’s volume was judged to be an imitation of the older artist’s recently-published album.

Delacroix’s lithograhic suite comprised 13 plates executed between 1834 and 1843. It had a print run of 80 and was published by the artist himself. Its commercial failure did not deter Paul Meurice, who acquired the lithographic stones of the work at the posthumous sale of Delacroix’s studio, from publishing a second edition in 1864, a year after the artist’s death. Meurice was a collector of Delacroix’s work and his personal association with Hamlet – he had co-authored an adaptation of the play with Alexandre Dumas père – may have contributed to this decision. The new edition incorporated three additional plates which Delacroix had left out of the 1843 edition. 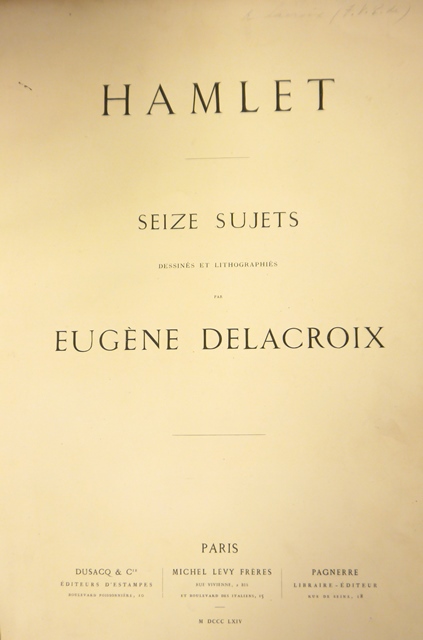 Hamlet was a constant source of inspiration for Delacroix who, to a certain extent, identified with Shakespeare’s hero. An early self-portrait is thought to represent the artist as Hamlet (although Walter Scott’s Edgar Ravenswood or Byron’s Childe Harold have also been proposed). During his stay in London in 1825 Delacroix may have seen Edmund Kean perform Hamlet. In the same year he painted one of his first works inspired by Shakespeare, Hamlet and the King. Delacroix saw the play again two years later when it was performed by Charles Kemble’s company at the Odéon theatre in Paris in 1827. Scenes from Hamlet would inspire several works over the following 30 years, the 1843 lithographic suite occupying a central position, some of its plates being reworkings of earlier compositions, while they themselves served for the elaboration of later works. Plate 3, for example, dated 1843, which shows the ghost of Hamlet’s father asking Hamlet to avenge his death, is closely based on the 1825 painting. 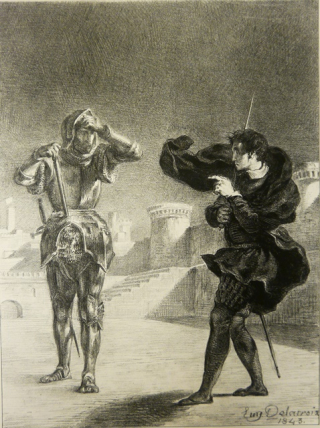 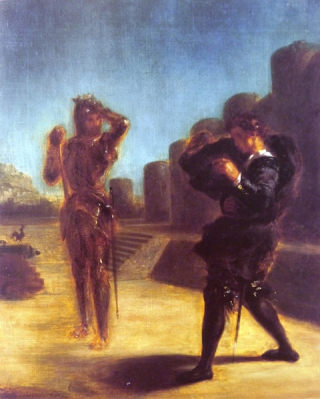 Likewise, the composition of Plate 13, dated 1843, showing the death of Ophelia had already been used in a virtually monochromatic 1838 painting, now in Munich, and was re-used in 1844 (Winterthur, Oskar Reinhart Collection), and, again (but in reverse), in the 1853 Louvre version. 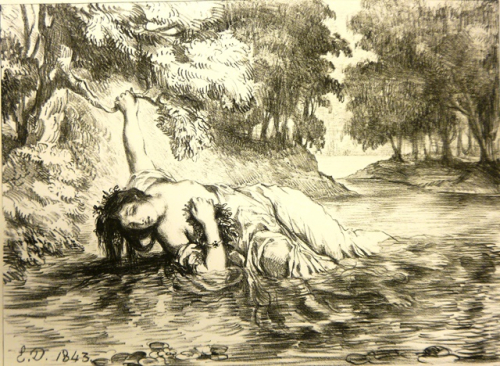 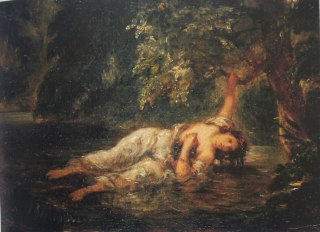 The composition of Plate 14, showing Hamlet and Horatio with the gravedigger holding Yorick’s skull (Act 5, scene 1), dated 1843, had also been used in a 1839 painting. 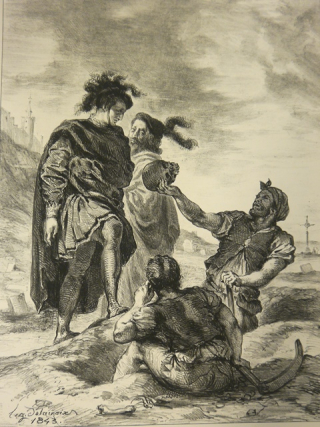 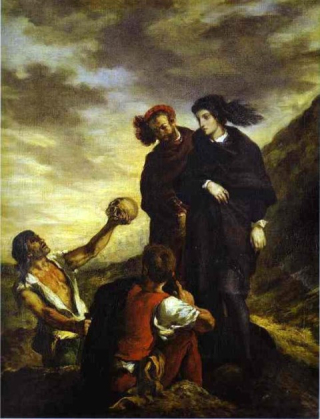 Delacroix’s last Hamlet work was the 1859 painting which combines the scene with Yorick’s skull with that of Ophelia’s funeral. On this occasion Delacroix went back even further, to his first Hamlet –inspired work, a lithograph he published in 1828. 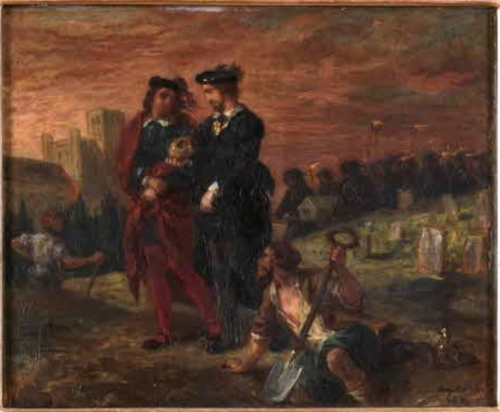 Like Delacroix, Théodore Chassériau (1819-56) was a great admirer of Shakespeare and produced a number of paintings inspired by Othello, King Lear and Macbeth. The originality and special qualities of his work were understood by few of his contemporaries; most saw his early works as imitations of Ingres (his teacher) and his later ones of Delacroix. Chassériau’s most important graphic work, his Othello prints, a series of 15 etchings published in September 1844, were naturally seen as an example of the latter tendency, even though they differ in both mood and technique. The contrast between the contemplative mood of Chassériau’s etchings with their emphasis on intense emotion, as opposed to the narrative action and dramatic power of Delacroix’s lithographs, was recognised by later critics.

The publication was commissioned by Eugène Piot, art historian, collector, antiquary, and publisher and editor of Le Cabinet de l'amateur et de l'antiquaire, an illustrated journal published between 1842 and 1846 (P.P.1916). Chassériau’s work was published in an edition of 25 copies as a separate album under the imprint of the Cabinet de l’amateur, not in the journal itself as is often claimed. 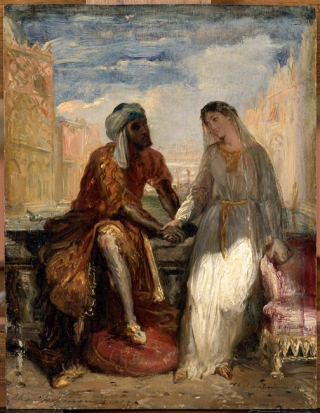 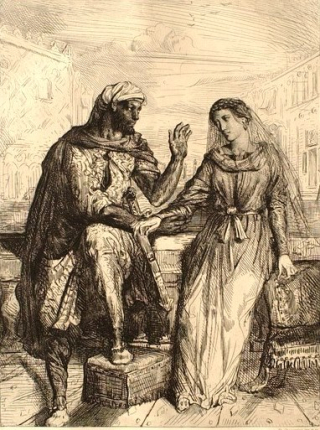 Théodore Chassériau, Othello and Desdemona in Venice, 1850. (Paris, Musée du Louvre), and the lithograph ‘Elle me remercia et me dit …She thanked me and bade me…’ (plate 2 from Othello, reproduced in Jay M. Fisher, Théodore Chassériau, illustrations for Othello (Baltimore, 1979). X.425/4729.

Like Delacroix, Chassériau re-used compositions from his etchings. Two paintings of 1849 and 1850, both now in the Louvre – Othello and Desdemona in Venice (illustrating Act 1, scene 3 of the play), and Desdemona (Act 4, scene 3) – are, respectively, variations of plates 2 and 8. 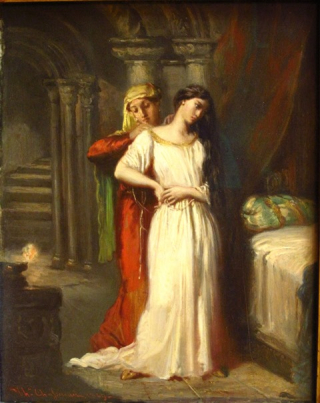 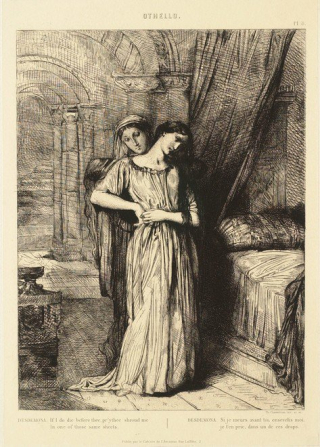 A complete reassessment of Chassériau’s work had to wait, however, until the last quarter of the 20th century, when the catalogue raisonné of his paintings and prints was published in 1974, followed by a remarkable catalogue of the Othello etchings in 1979, to accompany an exhibition at the Baltimore Museum of Art. The great retrospective exhibition in Paris, Strasbourg, and New York in 2002-03, and its monumental catalogue, finally revealed the full range of Chassériau’s achievements – as a graphic artist, a painter of decorations for public buildings, an orientalist and an artist whose work is not only an amalgam of Ingres and Delacroix but also a prefiguration of Gustave Moreau and Puvis de Chavannes.