To the British Museum Library with the Author’s compliments: Dragoș Protopopescu’s Shakespeare translations

The British Library holds a collection of ten Shakespeare plays in Romanian translation by Dragoș Protopopescu (1892-1948), a Romanian academic, writer and translator. This collection has the distinction of having been donated by Protopopescu to the British Museum Library in 1947. One title (King Lear) was presented to the Library in two editions (1942 and 1944); the other nine titles in the collection were published between 1940 and 1944 by various Romanian publishers. On the front cover of each book the donor inscribed: “To the British Museum Library with the Author’s compliments”. 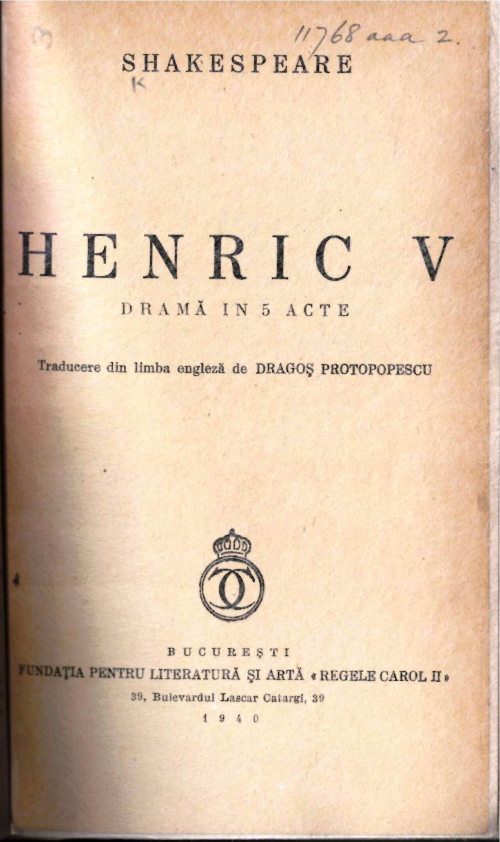 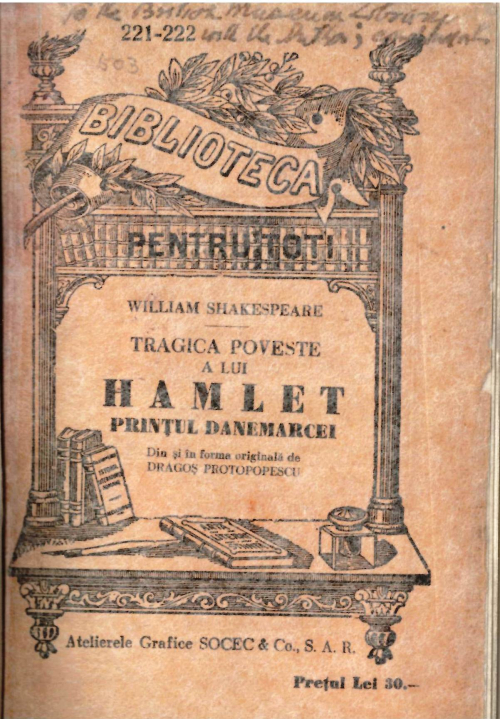 Between 1940 and 1945 Protopopescu published 12 translations of Shakespeare plays: Hamlet, The Tempest, Henry V, Coriolanus, The Winter’s Tale, King Lear, Othello, The Taming of the Shrew, The Two Gentlemen of Verona, The Merry Wives of Windsor, Twelfth Night and A Midsummer Night’s Dream. Two of Protopopescu’s published translations are not in the British Library: Twelfth Night and A Midsummer Night’s Dream both published in 1945. The former is held by the Romanian Academy Library and the latter is not currently listed in any publicly available online catalogue. 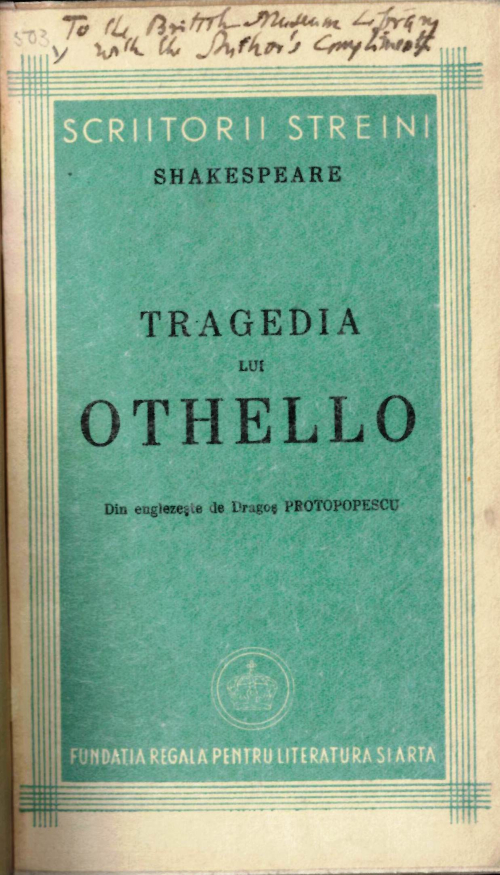 Translations of Shakespeare have a long tradition in Romania dating back to the mid-19th century. Julius Caesar was the first to be translated (from the French) and printed in Romania in 1844. From then until 1940 at least 27 Romanian authors translated Shakespeare plays into the Romanian language. Notable among them were Petre P. Carp, Adolph Stern, Scarlat Ion Ghica, Dimitrie N. Ghika, Victor Anestin, Margărita Miller, Verghi and Ludovic Dauș, among others. The National Theatre in Bucharest produced 18 Shakespeare plays and staged about 850 performances between 1884 and 1931.

The ongoing project of the Contemporary Literature Press of the University of Bucharest in cooperation with the British Council, the Romanian Cultural Institute, and the Embassy of Ireland aims to publish Shakespeare’s plays in the original and in parallel Romanian translations, which were published in Romania between 1840 and 1920.

Protopopescu was one of the most prolific Romanian translators of Shakespeare. Apart from his 12 published translations, he prepared an additional 25 Romanian translations of Shakespeare plays by 1948. Unfortunately only five manuscripts of these translations are known to be in existence today. Four are held at the National Library of Romania: A Midsummer Night's Dream (1945), Macbeth (1945), Julius Caesar (1945), Much Ado About Nothing (1948). The manuscript translation of Richard II is held at the National Museum of Romanian Literature in Bucharest. 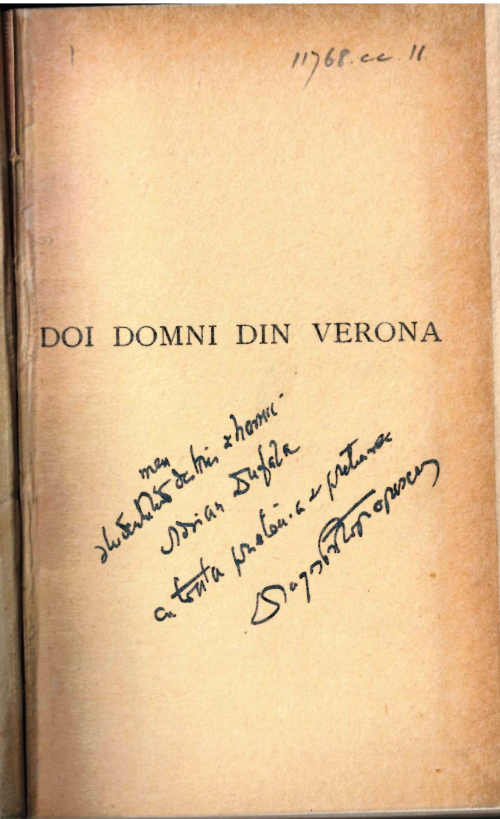 Protopopescu had a life-long association with the English language and Britain, from his early translations of contemporary Irish and British playwrights in 1913 to his doctoral studies in Paris and London in 1920-1923 and his professional work. His doctoral studies focused on the English dramatist William Congreve. Protopopescu was the first professor of English studies at the University of Cernăuți  in 1925 and held the Chair of English language and literature at the University of Bucharest from 1940. He served as a press attaché at the Romanian Legation in London from 1928 to 1930.

While researching at the British Museum Library, Protopopescu discovered in the Sloane Manuscripts a previously unknown Congreve poem entitled “A Satyr against Love” (Sloane MS 3996). He presented this discovery to the British public in a letter to the Times Literary Supplement of 8 November 1923, which received scholarly appreciation and praise. Protopopescu’s first translation of Shakespeare’s Hamlet was also researched at the British Museum Library in 1928.

On the evidence of his 18 book donations, Protopopescu had a working relationship with the British Museum Library spanning almost 30 years. These donations range from his first collection of poems Poemele restriştei (Bucharest, 1920; 11586.bb.49.) , presented in March 1921, to his English grammar Gramatica vie a limbei engleze (Bucharest, 1947; 12974.aa.70), which was donated together with his Shakespeare translations between June and October 1947. 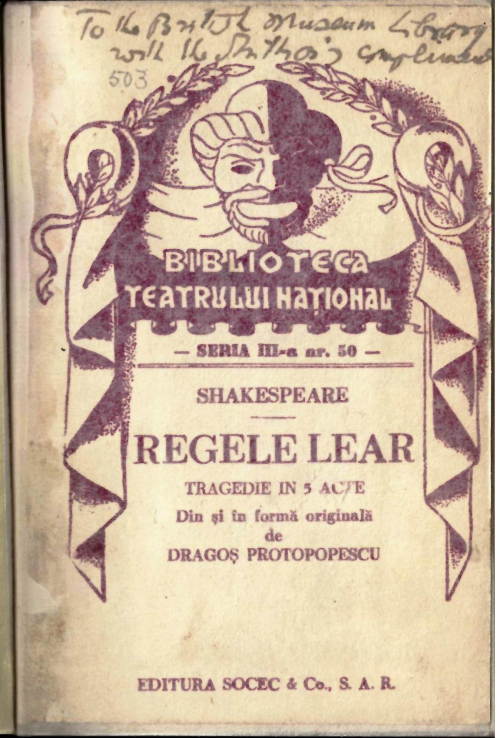 In Romania and Britain Protopopescu was not only known as a professor of English studies, a vice-president of the Anglo-Romanian Society in Cernăuți, and a translator of Shakespeare into Romanian, but also as a member of the Legionary Movement, a Romanian fascist organisation active between 1930 and 1941. Protopopescu was editor of the Movement’s newspaper Bunavestire in 1937-38, in which he also published pro-British articles. Although Protopopescu later distanced himself from the politics of the Legionary Movement, his controversial social and political engagement on the Romanian far right ultimately led to his arrest by the communist authorities and suicide in 1948.

William Congreve, A Sheaf of Poetical Scraps. Together with A Satyr against Love, Prose Miscellanies and Letters. Edited by Dr. Dragosh Protopopesco. Second edition (Bucharest, 1925). 11633.ee.9.

Two of Protopescu’s books are freely available online from the Contemporary Literature Press of the University of Bucharest: