The British Library possesses a mysterious book published in 1926 in Czechoslovakia. In keeping with its title, Cesta k jednoduchosti (‘Journey to simplicity’:, its plain purple cover bears only the title and the author’s name – the single word ‘Milena’. 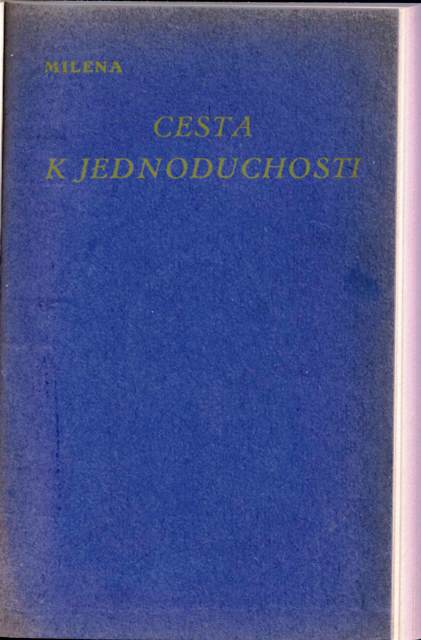 During her lifetime, the author bore three different surnames, but is widely remembered for her association with a man whom she met only briefly. Milena Jesenská  was born on 10 August 1896 as the daughter of Jan Jesenský, a prosperous doctor who alleged that he was descended from Jan Jesenius, the first professor of medicine at Charles University  and one of the Protestants executed in the Old Town Square in 1621. She was educated at the Minerva school, the first gymnasium for girls in Central Europe. After the death of her mother when Milena was 16, she became increasingly rebellious, purloining drugs from her father’s medicine cabinet, reading controversial authors and staying out all night. Dr. Jesenský insisted that she should enrol in medical school, but when she fainted during her first dissection class he allowed her to abandon her studies. A gifted pianist, she flirted with music, but lacked the application to make it her career. She became a well-known figure in café society during the First World War, when political tension was growing between Prague and Vienna and the Čapek brothers, Karel and Josef, and their friends were discussing new trends in literature and art. 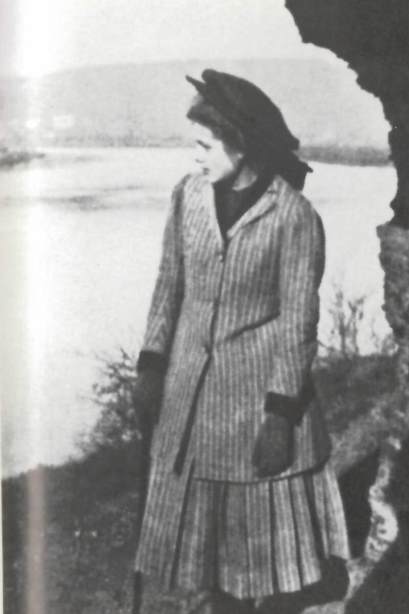 It was at the Café Arco in 1916 that Milena encountered two men who were to have a lasting impact on her life. One was a reticent young Jewish author who never stayed long at the café and initially made little impression on her. The second was Ernst Pollak, ten years older than herself. Her father disapproved of Milena’s association with a German-speaking Jew with no profession, and in 1917 he had her committed to a private psychiatric clinic. He finally capitulated, and in March 1918 Milena and Pollak were married and departed for Vienna.

Despite their participation in the lively intellectual life of the Austrian capital, the marriage proved unstable. Pollak had little regard for fidelity, and Milena herself began an affair with the author Hermann Broch. Desperate to recapture her husband’s attention, she stole and pawned jewellery from a friend to buy new clothes, and ended up in court. It was not until, in 1919, she began to write for the progressive liberal paper Tribuna, edited by Arnošt Lustig, that she began to develop a sense of identity and purpose, giving readers in Prague impressions of life in post-war Vienna. From fashion articles and essays on the delights of simple pleasures such as fruit, flowers and cakes (‘Happiness for ten crowns’), she progressed to sharp-eyed portrayals of the black market and the privations which the Viennese suffered as they nevertheless kept the city’s traditions of cafés and culture alive. 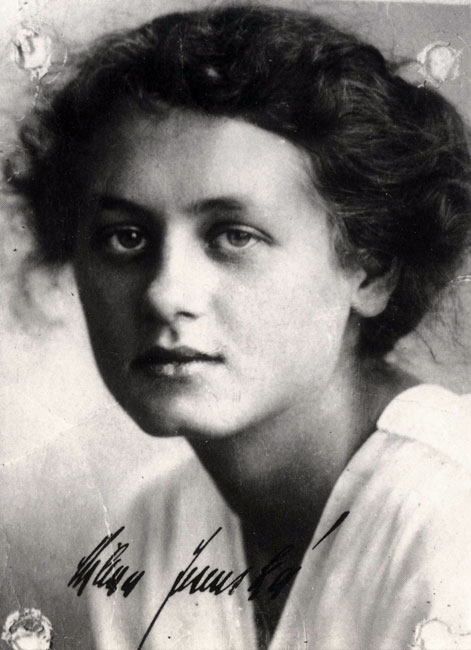 Milena in the mid-1920s. (Image from Wikimedia Commons)

On a visit to Prague in October that year, she met up again with the man whom she had known slightly from her Arco days, and they began a correspondence. It was these letters, subsequently published as Briefe an Milena, that made her famous though her association with their writer – Franz Kafka.

Many of the books about Milena define her in terms of this association – for example, Margarete Buber-Neumann’s Kafkas Freundin Milena (Munich, 1963; X.908/2595), or Kafka’s Milena (London, 1992; YK.1994.a.904), the English translation of Adresát Milena Jesenská (Prague, 1991; YA.1992.a.2927), a biography by her daughter Jana Černá. Yet they only met twice, for four days in Vienna and one in Gmünd, during a correspondence which broke off abruptly in November 1920. The relationship, which began as a literary collaboration when she translated Kafka’s story Der Heizer (‘The Stoker’), the first of his works to appear in Czech, stood little chance of success because of Kafka’s poor health and timorous pessimism (‘We are both married, you in Vienna, I to my fear in Prague…’) and Milena’s inability to leave Pollak, whom she eventually divorced in 1925. Although it was Kafka who ended their association, he entrusted her with his diaries, and they corresponded sporadically until his death in 1924. 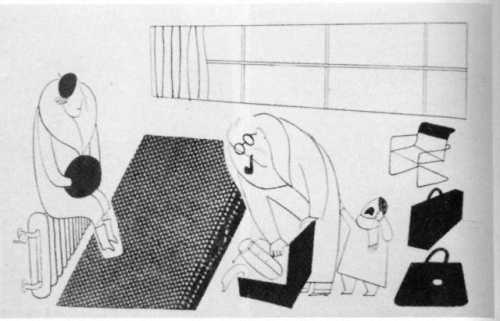 Cartoon from the magazine Žijeme (P.801/132) showing Milena, her husband and daughter in a sparsely-furnished modernist flat

After her divorce Milena returned to Prague and developed her career as a journalist, translator and editor. She published Cesta k jednoduchosti, a collection of her articles which she dedicated to her father, and their reconciliation was strengthened by her marriage on 30 April 1927 to a man of whom he wholeheartedly approved – the modernist architect Jaromír Krejcar. He was a member of the Devětsil  group, and Karel Teige was one of the witnesses at the wedding. A daughter, Jana (Honza) was born to the couple in 1928, but a serious illness during the pregnancy left Milena with a permanent limp and an addiction to morphine. The marriage ended in divorce in 1934. 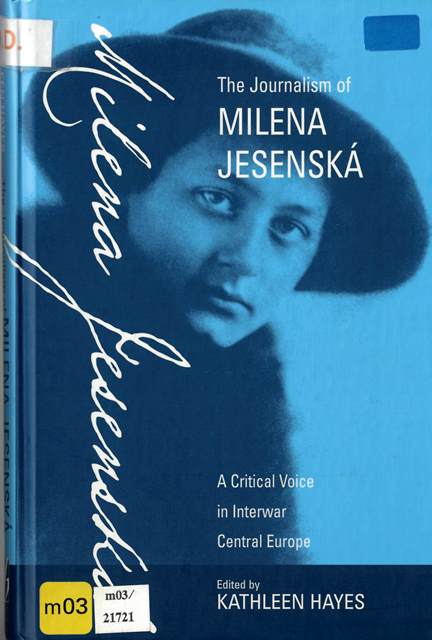 Two collections of Milena’s journalism make her work accessible to non-Czech speakers: The journalism of Milena Jesenská, edited by Kathleen Hayes, and Widerstand und Biografie: die widerständige Praxis der Prager Journalistin Milena Jesenská gegen den Nationalsozialismus, edited by Lucyna Darowska (Bielefeld, 2004; YF.2014.a.8107). These articles, originally published in Tribuna, Národní listy and Přítomnost, the political and cultural journal which she edited in 1938-39, provide critical insights into the rise of Nazism and its implications for Czechoslovakia. Her outspoken stance and the help which she provided to enable Jewish and political refugees to emigrate led to her arrest by the Gestapo in November 1939, imprisonment and deportation to Ravensbrück, where she died of kidney disease on 17 May 1944.

From the time when she stole flowers from graves to distribute as gifts to her last days in the concentration camp, Milena Jesenská’s life was characterized by an unquenchable zest for life and generosity of spirit. These qualities shine through her journalism, which is at last earning her the reputation which she won during some of the most turbulent times of recent Czech history.