The first Russian adaptation of Shakespeare’s Hamlet was made by the founder of the Russian classical theatre Alexander Petrovich Sumarokov (1717-1777). The play was written in 1748 by the ambitious 31-year old statesman and poet. 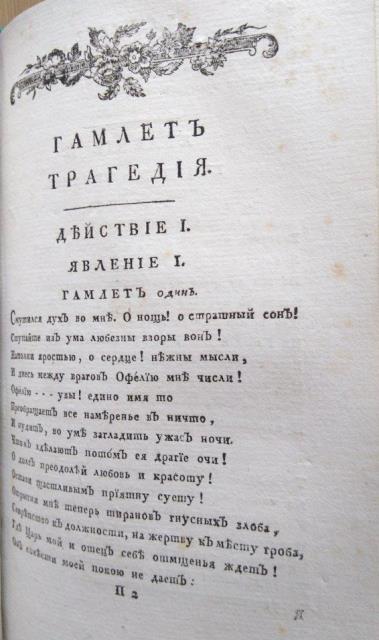 Some researchers suggest that this work was commissioned to legitimise the power of Peter the Great’s daughter Elizabeth through cultural discourse. Elizabeth took the Russian throne as a result of a court coup against an infant great grandson of Peter’s elder brother. Ivan VI was barely two months old when he became Russian Emperor and “reigned” for eleven months. For the rest of his short life he lived in exile and, from the age of 16, in solitary confinement. Elizabeth’s actions might be seen as avenging her father by returning power to his successors. 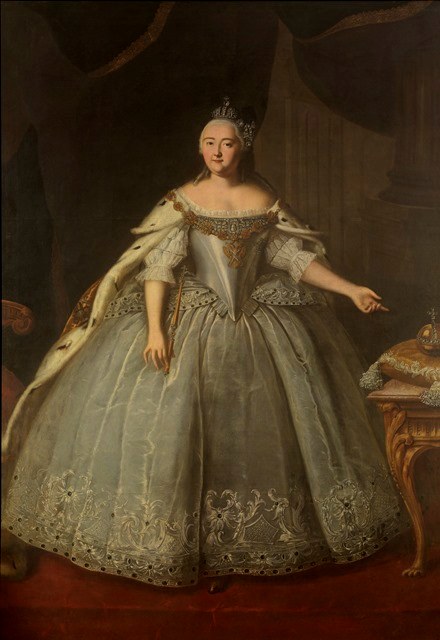 Translated from French, Shakespeare in Sumarokov’s version was also turned into a classist play, where people represented functions, such as order and chaos, good and evil, wisdom and stupidity. According to this pattern, the state could not be left without a legitimate ruler. Therefore, Sumarokov wrote a happy end with Claudius and Polonius punished by death and Hamlet, Ophelia and Gertrude victorious and content.

Although this version was rarely staged, the image of an outcast prince was often referred to. For example, Catherine the Great’s son and heir Paul tried on this role – his father was assassinated and overthrown by his mother’s lover to get her the throne. 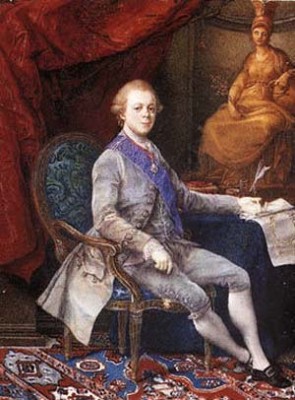 There is no evidence that Paul read the tragedy, as Hamlet was unofficially banned during Catherine’s reign, but when he  was abroad on a grand tour in 1781-1782, the Holy Roman Emperor Joseph II cancelled a performance of Hamlet as part of Paul’s reception, apparently because the actor who played the Danish prince hinted that there would be two Hamlets in the theatre. 20 years later Emperor Paul I was strangled in his bedroom to make way for his son Alexander I.

New attempts to translate the play resumed in the second decade of the 19th century, about ten years into Alexander’s reign, but really kicked off in the 1820s, under the rule of Nicholas I, when coups d'état went slightly out of fashion. Many critics think that before the Nobel Prize laureate and the author of Doctor Zhivago Boris Pasternak translated the tragedy (the first version was  published  in 1940 and the final one in 1968), the best translation into Russian was by Emperor Nicholas I’s grandson Grand Duke Konstantin Konstantinovich, or “poet KR (Konstantin Romanov)” – the name he signed his works with. Although trained as a naval officer, Grand Duke Konstantin was more inclined to the arts. He played the piano, wrote lyrics, and translated from English and German. His translation of Hamlet was created after Emperor Alexander III told his cousin Grand Duke Konstantin about his visit to Helsingør, where the play is set. 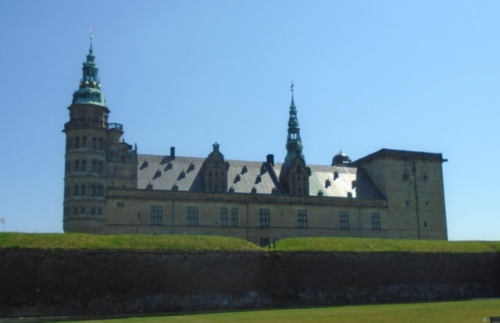 The visit to Denmark prompted Alexander to re-read the play and he found that its translations were lacking the true “feel  of the time”. KR’s was the 14th translation into Russian. This time the translator used the American edition of 1877 as his source. KR was proud of his work, when it was published in 1901 with extensive commentaries. 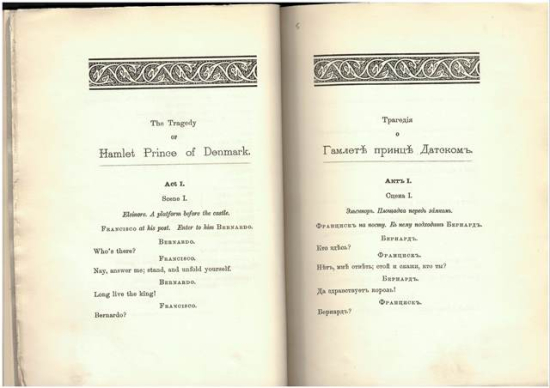 The play was performed several times and Grand Duke Konstantin himself played Hamlet in an amateur production (below). 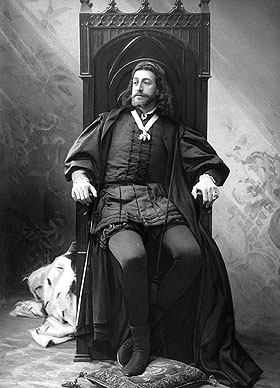 In the 20th century the story of Russian Hamlet continued. As the Russian poet of the Silver Age Maksimilian Voloshin put it, “Hamlet – is a tragedy of conscience,  and in this sense it is a prototype of those tragedies that are experienced by the “Slavonic soul” when it lives through disintegration of will, senses and consciousness”.

Posted by Olga Kerziouk at 3:50 PM