The Spiritual Jewel of Kyiv

This year marks the 1020th anniversary of the completion and consecration of the first stone-built church in the state of Ukraine-Rus', the Church of the Dormition (better known as the Church of the Tithes) in Kyiv. This church was built by Grand Prince Volodymyr  to replace the principal pagan sanctuary – the shrine of Perun – and symbolised the transition of Rus' to Christianity and the consequent recognition of the Kyivan state by the Christian world. 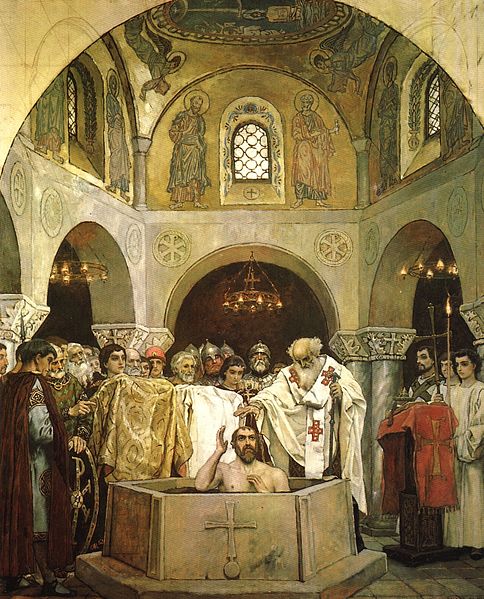 Baptism of the Holy Prince Volodymyr.  Fragment of the fresco by V.M Vasnetsov, St. Volodymyr's Cathedral in Kyiv (From Wikimedia Commons).

The official conversion of Kyivan Rus' took place in 988, and imparted an exceptionally high status to the Grand Prince. The baptism of the people of Kyiv was followed by extensive building work. A fortified stronghold, known as the ‘City of Volodymyr’, was constructed on the Old Kyiv Hill, dominated by the magnificent Church of the Dormition of the Mother of God. The Tale of Bygone Years (also known as the ‘Primary Chronicle’) dates the foundation of the church to 989.

The building of the church was the culmination of Volodymyr’s Christianisation of Rus', which helped establish close relations with Byzantium, and brought his people to acknowledge Graeco-Roman culture. The church took seven years to build and was consecrated on 12 May 996. Much of the building work was carried out by craftsmen from Byzantium. Although its official name was to be the Church of the Dormition, it soon became popularly known as the Church of the Tithes (Desyatynna Church), because to celebrate its opening, Prince Volodymyr held a great celebration and set aside one tenth of his revenues for the maintenance of the church. 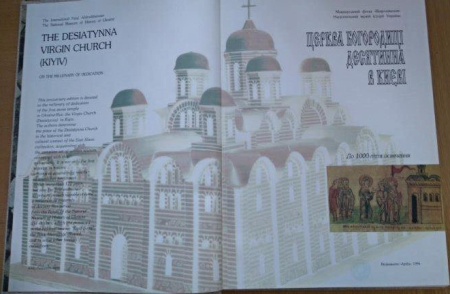 Title page of Tserkva Bohorodytsi Desiatynna v Kyievi, (Kyiv, 1996).  LB.31.c.9576, with an image from the 15th-century Radziwill Chronicle showing the Consecration of the Church of the Tithes

The church was relatively small (22 x 31 m). Its roof was supported by two rows of six columns, and three semicircular apses extended from the east wall. The interior was lavishly adorned with icons, crosses and precious stones which Volodymyr had brought from Chersonesus, where, the Chronicle tells us, he himself had been baptised. The floor of the church was made of glazed terracotta tiling. Some fragments, made of marble, porphyry and other coloured stones, have survived. The walls were decorated with frescoes and mosaics. Because so much marble and carved stone was used in the interior, the Chronicle describes the church as ‘marmoreal’.

The church contained the relics of saints – Pope Clement I and his disciple Phoebus – which Volodymyr had also brought from Chersonesus. Here, too, he brought the sarcophagus of his grandmother, Princess Olha. In front of the church there was a square, where Volodymyr placed four ‘copper shrines’ (possibly ancient altars) and copper figures of horses which had formerly adorned Chersonesus. Situated in the very heart of Volodymyr’s seat of power, the Church dominated not only the Upper City of Kyiv, but also the lower area, known as the Podil, and enhanced the ancient capital by its remarkable beauty. 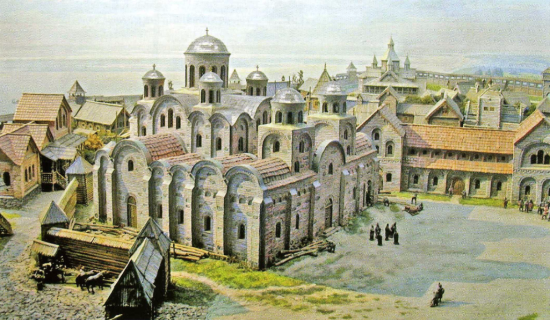 Central part of the 'City of Volodymyr', with the Church of the Dormition. Reconstruction from the Museum of the Institute of Archaeology of the National Academy of Science of Ukraine.

The church contained the tombs of seven princes, and  also became the final resting-place of Volodymyr himself and his wife, the Byzantine princess Anna. Their sarcophagi, according to the 11th-century Chronicle of Thietmar of Merseburg, stood side-by-side in the church.

The end of the statehood and power of Kyivan Rus' came suddenly, with the Mongol-Tatar invasion. During the 1230s, Batu Khan moved through the Slav lands, destroying everything in his path. After laying waste to large territories of Rus', and bloody battles resulting in the capture of Pereyaslav  and Chernihiv, the hordes, led by Batu’s cousin Mengu Khan, reached Kyiv. Only the River Dnipro/Dnieper lay between them and the city. The splendid city of Kyiv made a great impression on the Mongols, and Mengu Khan was reluctant to storm it, instead offering its people terms of surrender. But the Kyivans did not surrender the city.

In November 1240, the 140,000-strong Mongol army, led by Batu himself, crossed the Dnipro and besieged the city. The siege lasted for ten weeks and four days. Then, having breached the fortifications, the Mongols broke into the city on St Nicholas's Day (6 December). They plundered churches and monasteries and carried off the icons, crosses and all of the church ornaments. Palaces, homes and workshops of the people of Kyiv, books, manuscripts and works of art – all the precious cultural treasures of the state – went up in flames.

There was a valiant resistance by  Kyivan troops, led by the boyar Dmytro, the regent for Prince Danylo of Halych. The defenders were driven back to the ancient centre. There, in the princely court, beside the Church of the Tithes, where people had taken refuge, the final and bloodiest fighting occurred. The Church was packed with people, in the main body of the building, the galleries, and even in the sanctuary. When the storming of the church began, says the Chronicle, ‘the walls collapsed under the strain’. The siege-engines, which hurled rocks against the walls of the church, also played their part.

As the Mother-Church of the land of Rus', the Church of the Tithes was the principal spiritual jewel of Kyiv and the whole of Rus'. The fate of this church mirrors the fate of Kyivan Rus' itself. Built when the Kyivan state was first achieving international recognition, it was destroyed at the moment of that state’s downfall.

The church has been the object of research for almost 400 years and can still be seen today in graphic reconstructions and in the findings of archaeological excavations, continued today by the Institute of Archaeology at the National Academy of Science of Ukraine. 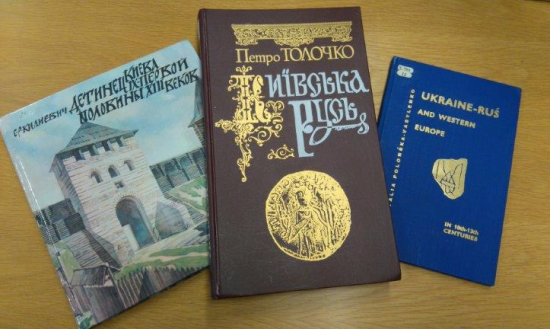 Books about Kyivan Rus' and Kyiv from the British Library's collections.

Ottonian Germany : the chronicon of Thietmar of Merseburg, translated and annotated by David A. Warner (Manchester, 2001) YC.2001.a.8948