Giovanni Boccaccio, poet, Humanist, orator, narrator and ambassador, father of the Italian novel, is one of the greatest storytellers known. He composed Il Decamerone (The Decameron)  in the mid-14th century and it  was first circulated in manuscript form in the 1370s. Despite being one of the most meddled-with texts to have endured, its ‘Frame story’ structure – ten tales told by each of ten people gathered together for a fortnight – has become canonised as a model for literary prose. Two texts in particular, one prepared by Ruscelli in 1552 and one by Salvati in 1587, are notorious for their meddling emendations. The Decameron is also widely known for its erotic components and it has quite unfairly led to its author and his work bIl eing associated with ‘obscenity’.

A common perception is that it is this supposed obscenity which has led to the book having been banned and suppressed here and there by the usual powerful groupings of offended sensibilities. The Roman Catholic Church did indeed ‘ban’ The Decameron but knew that they could not simply obliterate such a well-known and widely circulated work; the 15th and 16th centuries saw an estimated 192 printed editions alone. Faced with the Reformation, the Catholic Church needed to defend itself and reconsolidate its position of authority. To this purpose, one of the several measures taken by the Council of Trent was to create a commission to assemble and manage a list of forbidden books resulting in the fabled Index Librorum Prohibitorum which  identified books which were heretical, anti-clerical or explicitly sexual.

But how was the Church to manage The Decameron? Quite craftily was how. In the early 1570s, under the leadership of Vincenzo Borghini, a team of clerical scholars in Florence set about emending its text. They cloaked their expurgations by trying to convince people that they had kindly corrected existing editions, enhancing the language and in the process arriving at the ‘true’ text written by Boccaccio; original authorial intent had been revealed, “By Order of the Inquisition”. 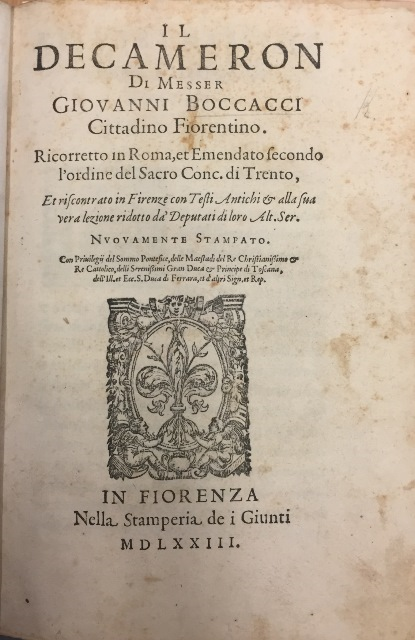 The British Library has three copies of this ‘corrected’ edition.  One  exposes clearly the motivations of the Church expurgations and emendations. A century after its publication another scholar called Marco Dotto systematically went through it annotating the pages: re-inserting the censored details and re-correcting Borghini’s emendations. Dotto wrote a short explanatory essay voicing his outrage at the mutilation of Boccaccio’s great work by the ‘scalpel’ of the Inquisition. He viewed himself as a ‘physician’ repairing their butchery, healing it and restoring the text to its true, we could say, rude health. 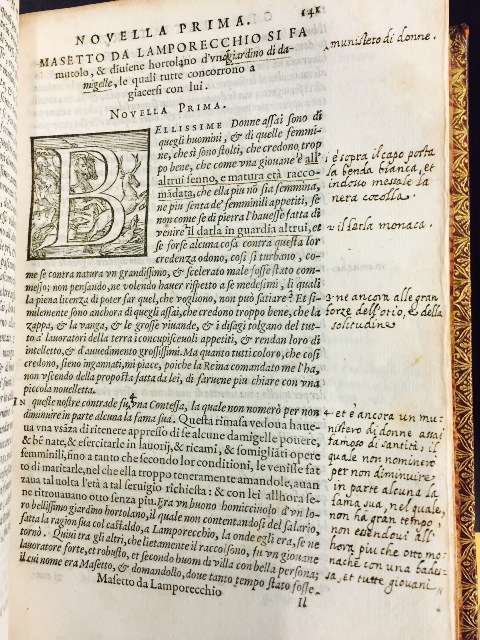 Day Three, Story One (Masetto, gardener at a convent) annotated by Marco Dotto. ‘Garden of Ladies’, or Convent? (C.7.a.8)

The story of Masetto of Lamporecchio told by Filostrato on Day Three is a favourite tale from The Decameron and illustrates  how the book has been meddled with. Masetto, a handsome young man, schemes to get a job as a gardener at a convent by pretending to be deaf and dumb. Two nuns talk of what they have heard rumoured to be the best pleasure a woman can get and scheme to meet Masetto in the garden’s woodshed. Other nuns witness this and insist on their share also. One day, the Abbess passes Masetto, spent and asleep on a bank in the garden. The wind happens to blow his shirt up and reveals all his glory to the head of the convent; consumed with desire she takes him to her quarters believing she can sleep with the young gardener with impunity as, deaf and dumb, he can tell no tale. All this is draining for Masetto so he decides to reveal he is cured. It is claimed as a miracle, nurtured by his tending the convent gardens. We can see how Dotto’s annotations restore the expurgated ‘munistero di donne’ used by Boccaccio which the clerics had rendered as ‘giardino di damigelle’. Borghini frequently anonymised particular named locations to protect reputations and often removed them entirely to places in France.

The last uncensored Decameron of the 16th century was printed in 1558 and with so many early editions it is interesting to make comparisons between them. Here we can see a folio with the start of Masetto’s story in an edition printed in Venice by Manfredo Bonelli in 1498. The text and the woodcuts faithfully assert the setting as a convent and its characters as nuns. 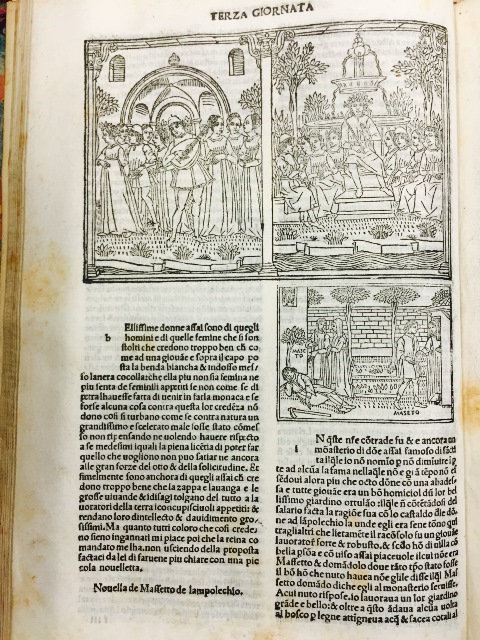 But censorship comes from many sources, individual sensibilities may be offended as much as organised, institutional interests; a fact that can be seen in this mid-15th century manuscript of The Decameron where the concluding sentiment on Masetto’s tale, has been heavily censored and obscured by another hand. 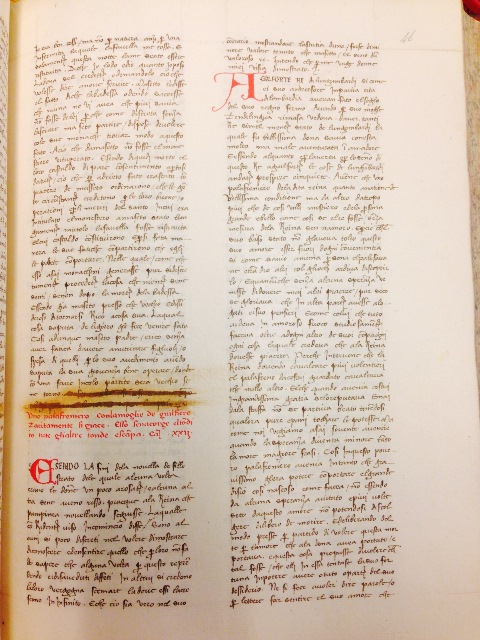 Such are the fascinations with obscenity and censorship, the simple fact that Boccaccio is one of the greatest storytellers ever to be printed can be in danger of being overlooked. We can celebrate this year’s Banned Books Week  by appreciating a good read of unexpurgated editions of this great collection of stories; though it can be fun to read the censored efforts too. But do remember that original authorial intent should never be taken for granted – sometimes it is wrested away by the operations of power and can be lost forever because of some individual’s  or organisation’s disapproval and assault. 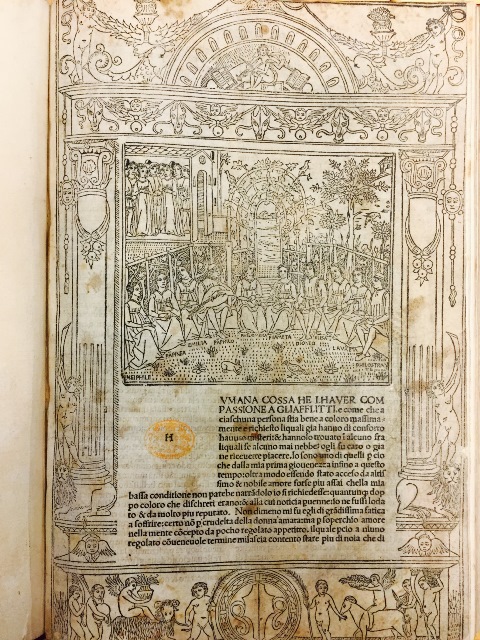 This blog is part of series for Banned Books Week 2016. See also Melvin Burgess’s blog on Censorship and the Author.