I was delighted to discover that the British Library’s recent exhibition Shakespeare in 10 Acts chose to tell the remarkable story of Ira Aldridge’s career – albeit only part of it. Although the famous black Shakespearean actor acquired star status in the UK provinces, he was never fully accepted in London by the cultural elites. Nevertheless his acting was celebrated on the Continent wherever he went. He toured extensively from 1852 to 1867: he went as far as Imperial Russia, including Poland and Ukraine, and visited Mongolia and Turkey.

Aldridge’s contribution to Shakespeare’s performance history was not limited to the question of race and his pioneering acting feats as Othello or King Lear (in whiteface). In the non-Anglophone reception of Shakespeare Aldridge is a very special case in the dissemination of his work. At the time not many proper translations were available to non-English speakers and thus Shakespeare was not staged frequently, in some places not at all (for example, in 1858 Aldridge brought Shakespeare to Serbia for the very first time with his Richard III) . 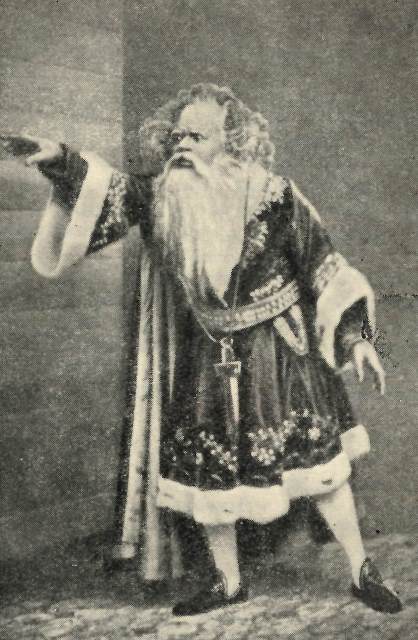 I will relate only one of Aldridge’s many continental success stories, one not mentioned in the exhibition, which took place in Poland (then occupied by Russia, Prussia and Austria). Some Polish scholars believe that Ira Aldridge is of unique importance in the reception of Shakespeare in Poland as his six visits, over the period 1853-1867, may not only have inspired more and better Polish translations of Shakespeare’s plays but also influenced the acting style of many Polish actors for years to come. Undoubtedly his first performances of Othello with German companies motivated Józef Paszkowski (1817-1861) to prepare a Polish translation of the original, which was used for the first time by a Warsaw troupe during Aldridge’s visit in 1863. 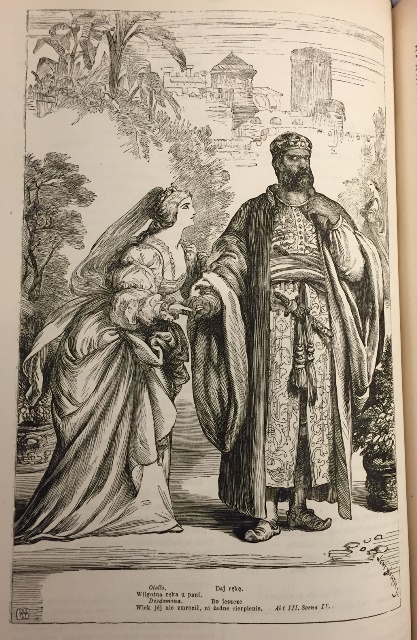 Most Polish reviews of his performances praised his realistic renditions of the roles. When touring, as a rule he performed in English with actors from a given country playing in their native languages but it is often claimed that because of his acting genius he proved that the imposed barriers of languages and cultures could be transcended, which he achieved by the ‘sweetness and softness of his voice’ and passion too.

In continental Europe Aldridge was awarded medals and honours wherever he went, including honorary memberships of many academies and arts societies. He consorted with kings, queens and emperors. But the famous black tragedian was also sensitive to the somewhat delicate political situation in partitioned Poland. When Poles boycotted him in Cracow because he played in a German theatre, for the first time he leaked to the press news of his involvement with the abolitionist movement in the USA, to prove that he sided with the oppressed, including Poles. As a result he was under constant surveillance by officials of Tsarist Russia who did not like it that Poles identified with Aldridge as an oppressed man in his self-professed exile. In the press he was often referred to as ‘our brother’ and his performances quickly became political events.

Aldridge died  in Łódz in provincial Poland where he was given a splendid funeral. A long funeral procession crossed the city, with members of the local theatre society carrying his medals and orders on red velvet cushions and a laurel wreath, while local people covered his grave with flowers. The grave is cared for by the Łódz Appreciation Society and many anonymous citizens decorate his grave on a regular basis with fresh flowers and candles. His tomb was renovated in 2001. In November 2014 a commemorative plaque designed by a renowned Polish artist, Professor Marian Konieczny, was unveiled at the entrance to the Museum of Cinematography in Łódz  (the former location of the theatre and Hotel Paradyz in which Aldridge was invited to perform); you can see a recording of the event made by Professor Sławomir Kalwinek of the National Higher School of Film, Television and Theatre in Łódź, here. 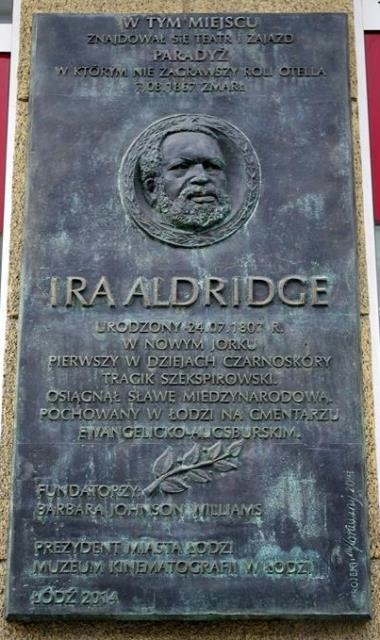 Two plays about Ira Aldridge in Poland have been written and staged to date: Maciej Karpiński’s Otello umiera (‘Othello Dies’) first published in Dialog monthly, 2003, no. 1/2 (P.P.4838.kob); and Remigiusz Caban’s Murzyn może odejść (‘The Negro must leave’) (2010). Both plays were staged.

You can find out more about all aspects of Shakespeare’s life and works, including famous performances and performers on our Shakespeare web pages.

Posted by Olga Kerziouk at 4:10 PM