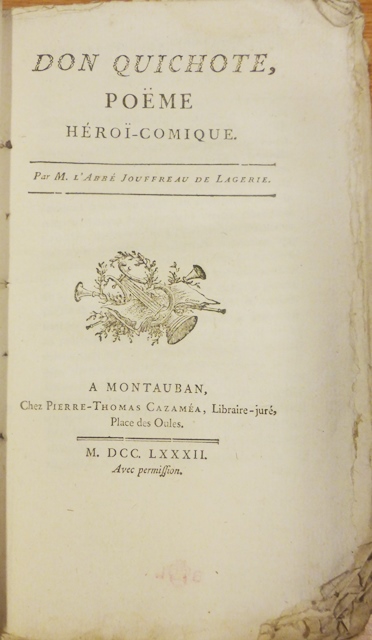 The Poëme is divided into 5 chants or cantos, preceded by a prose introduction. It is composed in the classical French metre of rhyming alexandrine couplets. The narrative draws on Cervantes’ novel but it is not in any way a version of it. It opens with Don Quixote’s distress at Dulcinea’s transformation into a peasant girl by the sorcerer Malembrin who has also carried her off to the Underworld. Encouraged by la Folie (Folly), the knight and Sancho Panza do battle with Malembrin and his army, led by the giant Freston. To save his forces from certain defeat the sorcerer transforms them into windmills, which inflict great damage on both knight and squire. Transformations preserve his army in two subsequent engagements. Folly returns to encourage Quixote, promising the return of Dulcinea and urging him on to new adventures. Spurred on, Quixote rescues Queen Lucinda from a gang of robbers. Malembrin now conspires with l’Amour (the God of Love), to make the knight fall in love with Lucinda. The King of the gods, alarmed at Quixote’s lapse, complains to Folly who, in the guise of a wronged queen, seeks Quixote’s aid. He abandons Lucinda, who takes her own life. Quixote descends to the Underworld, guided by Folly, where with the aid of other knights errant he defeats Malembrin. Dulcinea is rescued and freed from the evil spell. 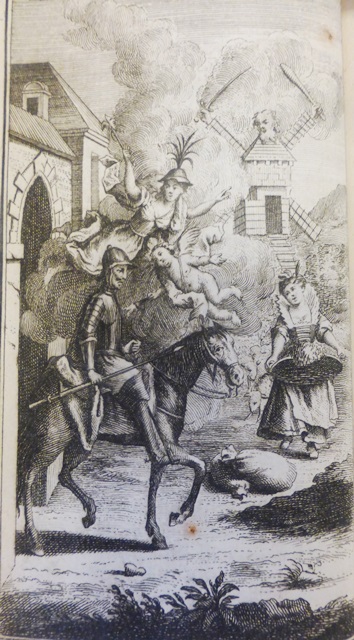 Malembrin and Freston both occur in Cervantes’ novel. Malambruno is the giant and sorcerer in the elaborate charade that is the ‘Dueña Dolorida’ episode (Don Quijote, II: 38-41); Frestón is the enchanter whom Quixote blames for his failures. Queen Lucinda, however, is clearly not the beloved of Cardenio (DQ. I: 24-37), but the Duchesse de Médoc from the second continuation of François Filleul de Saint-Martin’s version of Don Quijote (Paris, 1713; Cerv.126.). In Livre III, ch. 42, Don Quixote and Sancho rescue the Duke and Duchess from a band of robbers, as in the Poëme. Sancho’s elevation to the status of knight-errant also derives from the continuations.

In addition to the windmills episode, other notable incidents from Cervantes’ novel appear in the Poëme in a new guise. Malembrin’s transformation of his army into sheep to save them in the second encounter with Don Quixote is adapted from the knight’s mistaking a flock of sheep for an army (DQ, I: 18). The motif of a damsel in distress employed as a ruse echoes the role of Dorotea as the Princess Micomicona (DQ, I, 29-30) and the ‘Dueña dolorida’ episode.

As the opening lines suggest, however, what most characterizes Jouffreau de Lagerie’s work is its imitation of Virgil’s Aeneid. . The first line clearly echoes Virgil’s opening lines: ‘Arms and the man I sing who… exiled by fate’: 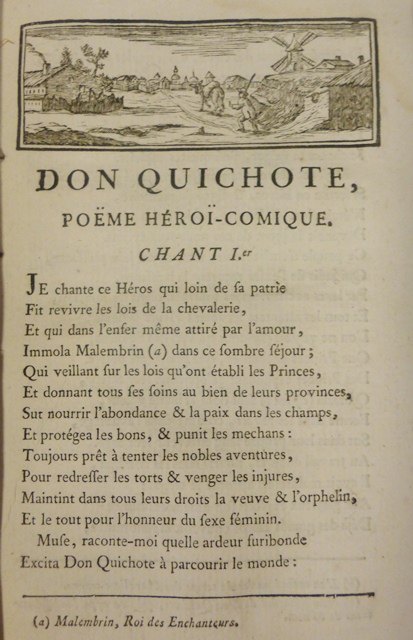 To the world of chivalry and evil sorcerers is added that of the Classical gods and goddesses. So we have Folly (Greek Atë), Love (i.e. Eros/Cupid) and a ‘Roi des Dieux’, fancifully named ‘Tulican’ who nonetheless has the role of Zeus/Jupiter. Narrative motifs involving the gods can be traced to Virgil. For example, Folly’s tearful plea to Tulican on behalf of Quixote after Malembrin’s magic saves Freston’s army (Canto 2) echoes Venus’s plea to Jupiter to spare the Aeneas and the Trojans (Aeneid, Book I, lines 229 ff). Earlier, Folly successfully pleads with the god for the recovery of her freedom from la Sagesse, goddess of Wisdom (Canto 1). More blatant still, the Queen Lucinda episode, specifically the boar hunt and Lucinda’s suicide, derives from Virgil’s account of the fatal love of Dido for Aeneas (Aeneid, Book IV).

Jouffreau also employs extended similes, so typical of Virgil. Examples include the unlikely description of Sancho in battle as a lion defending his cubs against a hunter (Canto 2, p. 28); the likening of the dust clouds stirred up by Freston’s army to snow whipped up by the North wind (Canto 3, p. 4); and the comparison of the fall of the giant Morgan at Quixote’s hand to the felling of a pine tree (Canto 3, p. 9).

Unlike his Jouffreau’s anthology of erotic verse, this work was not a success to judge by the existence apparently of just one edition. Evidently drawing on the version of Filleul de Saint-Martin and its two continuations, Don Quichote emerges as a scholarly exercise in re-creating Classical Latin verse in French hexameters. Jouffreau’s Sancho is transformed from savvy peasant to knightly hero, as indeed is Quixote himself. He is worlds away from the comedic, but essentially human would-be knight-errant whose bookish ideals clash with the reality of Golden Age Spain. And surely it is only Cupid’s arrow that would have rendered Cervantes’ Don Quixote unfaithful to Dulcinea?