I was there when Jäki licked Iggy Pop’s leg: Punk in Germany

Gudrun Gut, drummer and bassist in German punk bands such as Din-A Testbild, Einstürzende Neubauten, Mania D. and Malaria, says she was there when Jäki Eldorado (née Hildisch) — ‘Germany’s first punk’ — licked Iggy Pop’s leg during a Stooges gig in 1977. Purely a publicity stunt according to Jäki, but one that would provide an iconic punk photo. A decade after 1968, punk adopted a more chaotic and ‘publicity stunt’ mentality that had ‘nothing to do with social criticism’, Jäki suggests in Jürgen Teipel’s ‘docu-novel’ Verschwende deine Jugend (p. 66). He continues: ‘Punk Rock was so interesting precisely because there was no longer any ideological baggage. You could go crazy. Party. You wouldn’t care if someone walked around with a swastika or if someone else supported the RAF [Red Army Faction]’. Cyrus Shahan, in his Punk Rock and German Crisis: Adaptation and Crisis after 1977 (New York, 2013; YC.2014.a.10231) explains the phenomenon thus: ‘whereas student movements of 1968 and German terrorism both sought to establish (theoretically, violently) their own conceptions of a just, utopian society, punk was decidedly invested in an endless dystopia of the present’ (p. 2). Shahan echoes Eldorado in saying later, ‘Punk did not want to establish a new order to stave off chaos of the past. Punk wanted chaos. Punk did not want to erect barriers between fascism and the present. It wanted to tear down the present’ (p. 13). 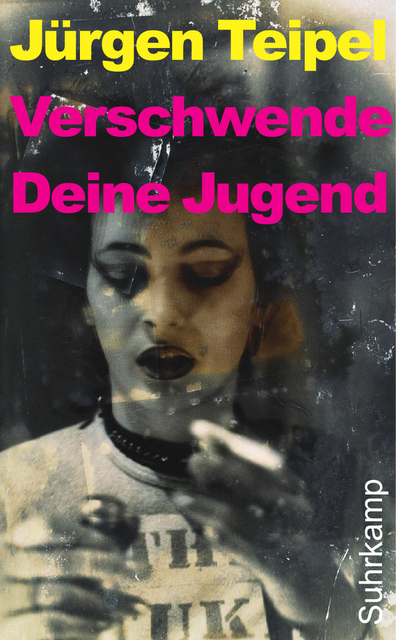 While ‘punk in Germany was not English punk’ (Shahan, p. 11), punk bands in England did to some extent spark the creation of a German punk culture and music scene – arguably predominantly in Düsseldorf – in the summer of 1977. Alfred Hilsberg, contributor to Sounds magazine and owner of the labels Zickzack and What’s so funny about, calls English punk in England the ‘trigger’ for him to do something similar in Germany. Describing the performances he saw in London in 1976, he says, ‘it really blew me away that such a thing was possible: this eclectic, crazy cluster of people. There was a violent element of course. But that was only a game. It clearly wasn’t serious when they waged war with one another’ (Teipel, p. 28). This inspired Hilsberg to organise the first punk concerts in Germany, bringing over The Vibrators and The Stranglers. ‘Although, The Vibrators only half-count as punk. It was more rock,’ he says, ‘but at the time no one really knew what punk was’ (Teipel, p. 28). 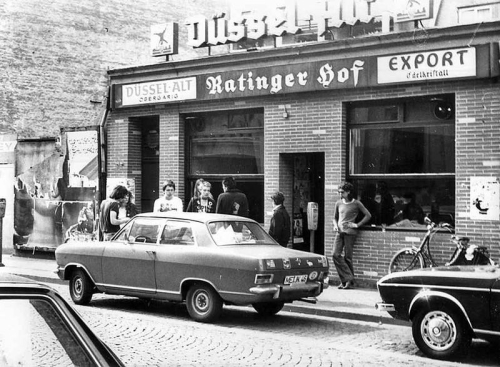 The Ratinger Hof, a pub in Düsseldorf where the first punk performances in Germany took place (photo by Ralf Zeigermann from Wikimedia Commons)

Punk was a term that didn’t carry a solid definition sonically or aesthetically, an idea which blurred at the margins and incorporated or appropriated a broad range of references. In A Cultural Dictionary of Punk (London, 2009; YC.2010.a.8548), Nicholas Rombes, in line with Hilsberg’s understanding, labels The Vibrators a 60’s-influenced ‘pop-punk’ group: ‘Bands like The Vibrators cultivated the open spaces that more radical bands like the Sex Pistols cleared, making possible a longer arc for punk and a deliberate future in the face of No Future’ (p. 296). That ‘arc’ is evident in their recent resurfacing in Berlin’s Cassiopeia Club, nearly 40 years after their first gig in the city.

Frank Z, guitarist and singer from Abwärts, remembers The Vibrators’ second gig in Germany, in Hamburg’s Winterhuder Fährhaus — what Hilsberg calls a ‘nice place all round, the kind of place you went for tea and cake’ (Christof Meueler, Das ZickZack-Prinzip: Alfred Hilsberg – ein Leben für den Underground, Munich, 2016; YF.2016.a.22745). Frank Z again: ‘the singer [Ian ‘Knox’ Carnochan] was a proper skinhead. He came on stage – and then the first available person on the front row got a boot. Right in the face [Aber voll in die Fresse]’ (Teipel, p. 28). Axel Dill, the Abwärts drummer, corroborates: ‘they played for ten minutes – and then with a few brawlers, which they had brought with them, they set off into the crowd and started a huge fight. It was a full-on battle. All the furniture was flying through the air. Everyone was beating everyone. That was their concept’ (Teipel, p. 28). But Moishe Moser, an associate of Hilsberg’s and The Vibrators’ road manager on a later German tour, provides evidence of the band’s softer side. On the last night of the tour he went to give the band their share of the proceeds before realising that the money wasn’t there: ‘Then, The Vibrators clubbed together so that I could get a taxi home. That was the beginning of a friendship that is still going today’ (quoted by Meueler).

Style was undoubtedly influenced by the fashion in the English punk scene, something also focused on in the British Library’s ‘Punk 1976-78’ exhibition. Peter Hein – another pretender to the title of ‘first German punk’, and singer in Charley’s Girls and Fehlfarben among other bands – says as much: ‘to become punk was a totally conscious decision. I saw a picture in the New Musical Express – with jacket and paperclips and kid’s sunglasses. And I thought: ‘I’d like to look as good as that.’ So I wandered about just like that. Kid’s glasses, paperclips on my jacket collar.’ Amidst the chaos of the ‘No Future’ punk ethos, Peter Hein does appear to leave some room for thought into his own future. In another supposed – but presumably not wholly applicable – borrowing from England, Hein avoids alcohol during his years of creativity. This is, for him, in contrast to American bands who subscribe to a drug-fuelled lifestyle:

We were the juice-drinkers. At the time I drank no alcohol. Punk was a straight movement for us. […] We were against the druggy-bands. Against the pisshead bands. We were absolutely England-oriented. The Americans we never took seriously because their punk-rockers took drugs. That was not cool. 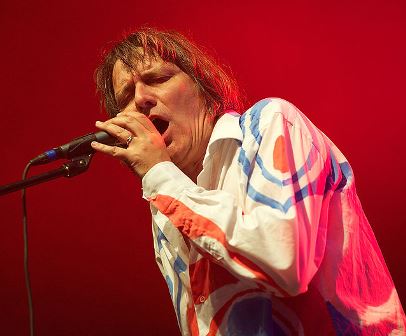 A bizarrely sanitized life, then. And, even more bizarrely, one inspired by our punk scene so closely associated with precisely the sort of intoxication Hein refuses. In the nostalgic accounts of German punk protagonists, there is a sense of openness and acceptance, where anything goes, but without a stereotypical radicalism. Jäki Eldorado says as much when he suggests that, whereas in England there may have been a radical break with what came before, in Germany there was a more fluid merging between hippy and punk movements: ‘when I started working in Dschungel [a punk record store], I even had long hair still’ (Teipel, p. 27).