In the English-speaking world, the Swiss-born author Johann Peter Hebel is less well known that he deserves to be – possibly through confusion with his near-namesake, the poet and dramatist Friedrich Hebbel. Their fields of activity, however, were very different, for besides his poems and stories Hebel was also a pioneering supporter of a Swiss-German dialect which defeated even Goethe. 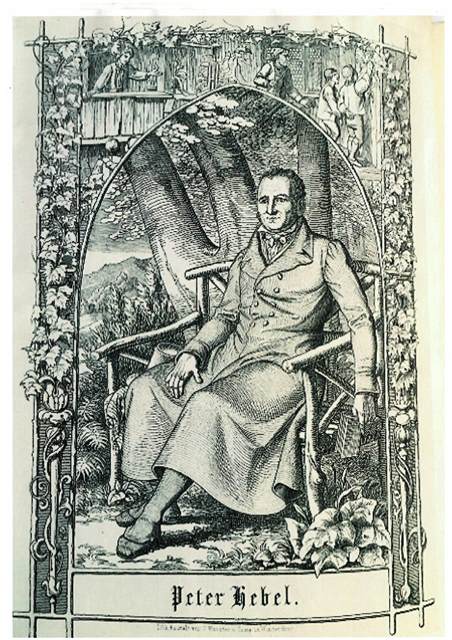 Tragedy struck the Hebel family in the first year of his life, when his father and baby sister Susanne succumbed to typhus. His parents had been working in Basel at the time of his birth, and with his mother Ursula he spent part of the year there and the rest in her native village of Hausen im Wiesental,  where he began his education, continuing his studies in Basel and at the grammar school in Schopfheim. When he was thirteen, his mother fell seriously ill, and with the local magistrate he hurried to Basel to bring her back by ox-wagon to Hausen, only to see her die on the journey.

With the help of sponsors Hebel was admitted to the Gymnasium illustre in Karlsruhe, graduating in 1778. Like Hegel, Hölderlin and Schelling, he studied theology but turned to teaching when he was unable to obtain a parish. Among the subjects which he taught were botany and natural history; he amassed a considerable collection of plants, and was also an honorary member of the Jena mineralogical society. His modest ambition to live out his days as a country pastor was never fulfilled; instead he became director of the Karlsruhe Gymnasium, and spent the rest of his life there. However, in 1819 he was appointed prelate of the Lutheran churches in Baden, and thus a member of the upper chamber of the local assembly. This allowed him to support social and educational enterprises such as the establishment of institutions for the deaf, dumb and blind and better training for Roman Catholic priests. He remained actively involved in this work until his death from cancer on 22 September 1826.

Alongside these duties, however, Hebel maintained a rich creative life. Devoted to the language as well as the nature of the country where he had grown up, he composed, on returning from a visit there in 1799, a collection of 32 poems in the local dialect, the Allemannische Gedichte (‘for friends of rural nature and customs’). No Basel publisher, however, would risk publishing a book in such an obscure tongue as Alemannic, and it was not until 1803 that it came out anonymously in Karlsruhe. The British Library possesses a copy of this first edition. 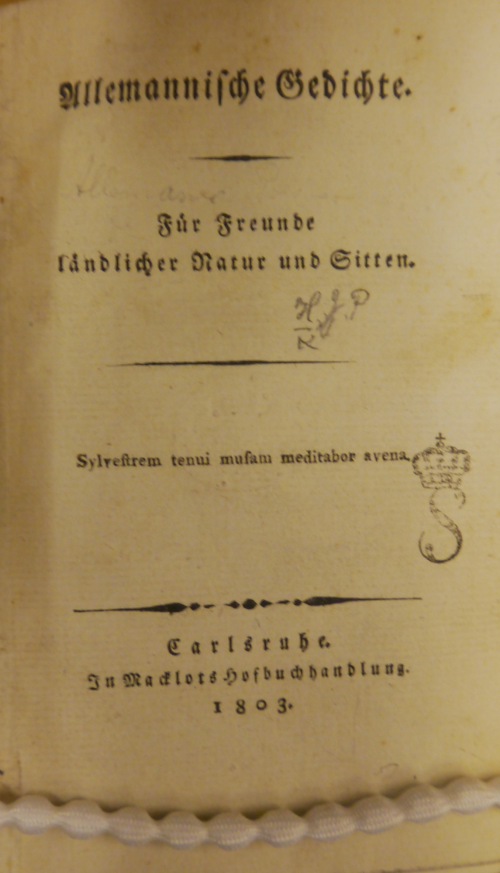 One of the most famous poems in this volume is ‘Die Vergänglichkeit’ (‘Transience’), a dialogue between a father and his young son as they travel through the evening landscape by cart, passing the exact spot at which Hebel’s own mother had died before his eyes. The sensitive evocation of human emotions and picturesque landscapes brought the poems such success that a second edition followed in 1804, this time under Hebel’s own name.

His interest in education led to two more of his most famous productions, the ‘calendar stories’ which he wrote as editor of the Rheinländischer Hausfreund, at the rate of 30 per year, and a collection of Bible stories for use for pupils aged 10-14 in Protestant schools, the Biblische Geschichten (Stuttgart/Tübingen, 1824; 1011.d.8), whose lively narrative style made them so popular that a version for Catholic schools was published the following year (3126.aa.8). The British Library also holds a first edition of the Schatzkästlein des rheinischen Hausfreundes (Tübingen, 1811; 12315.d.19), a treasury of stories from the Rheinländischer Hausfreund which remain enduring favourites among German readers, including one of his most famous stories, Unverhofftes Wiedersehen (‘Unexpected Reunion’), an eerie tale set in the Swedish mining district of Falun which also inspired E.T.A. Hoffmann’s Die Bergwerke zu Falun.

The wit, humour and keen observation which characterize Hebel’s writings attracted many illustrators. Especially charming are the lithographs based on pen and ink drawings by Hans Bendel for a revised version of the Allemannische Gedichte (Winterthur, 1849; 11527.g.12) containing settings of five of the poems with piano accompaniment. Equally appealing are the Dreißig Umrisse zu J. P. Hebel’s allemannischen Gedichten, 30 sketches by Julius Nisle. Both evoke a vanished world in which the dignitaries of Schopfheim, the rustic lovers Hans and Verene,  beggars, ghosts and tipsy peasants are portrayed in loving detail, every feature of the  landscape and local costume faithfully depicted, yet without sentimentality. 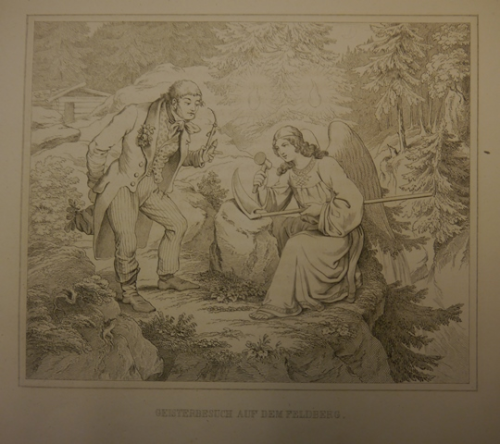 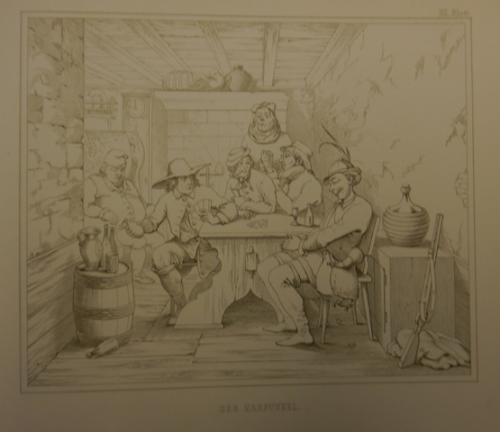 These qualities also won Hebel many admirers, including Tolstoy, the Brothers Grimm, Goethe (who found him a ‘splendid man’ and tried, not very successfully, to write a poem in Alemannic), and Hermann Hesse, who considered him the greatest German storyteller, on a par with Gottfried Keller  and with a surer touch and more powerful effect than Goethe himself.

Paradoxically, while his fellow-poet Eduard Mörike chafed at the restrictions of life as a country parson, this represented an ideal which Hebel was never to attain. Yet, as he himself acknowledged, an invisible hand seemed to lead him far beyond his humble aspirations, and his importance to literature as well as to education and the humanities is marked by the decision of the Evangelische Kirche in Deutschland to commemorate him in its calendar on 22 September, the day of his death 130 years ago.