‘The only censor is honesty’: Press Freedom and its Limits in Revolutionary Vienna

For many who took to the streets in the European revolutions of 1848, press freedom and an end to government censorship were key demands. When these were granted – if only, as it often turned out, for a limited period – both the revolutionaries and their opponents took the opportunity to express their arguments and opinions in a torrent of printed material.

A look at the British Library’s collection of ephemera from Vienna during the period clearly demonstrates the importance of this aspect in the discourse of the revolution. Among the first publications to appear following Emperor Ferdinand’s promise of more liberal press laws on 15 March, were poems celebrating the achievements of the revolution, including Friedrich Gerhard’s ‘Die Presse frei’, which declares that now ‘The only censor is – honesty’. Like various other pieces dated on and around 15 March, it proudly claims to be the first uncensored work issued by its printer. 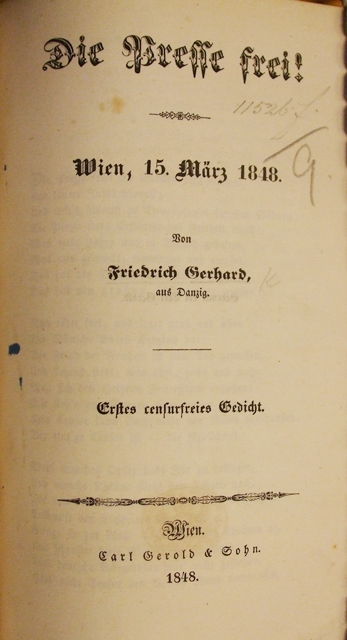 As well as poetry, there were prose declarations of gratitude. A ‘Manifest der Schriftsteller Wiens’ (‘Manifesto of Vienna’s writers’, 1899.m.19.(2)), also dated 15 March, is signed by 27 writers who proclaim that they are ‘taking formal possession of the rights of a free press guaranteed by our most gracious monarch’. The first signatory, Ignaz Franz Castelli, later wrote a series of didactic pieces to educate the wider public about the gains of the revolution. In the first, ‘Was ist denn jetzt g’schehen in Wien?’ (‘What’s just happened in Vienna then?’, 1899.m.19.(170)), he calls freedom of the press ‘the most excellent of all freedoms.’

Castelli was neither a radical nor an active revolutionary (he would spend much of 1848 in the quiet seclusion of his country estate). But he believed that wise and good citizens, now permitted to judge for themselves about the reading-matter on offer, would reject anything ‘unworthy’. Many conservatives were less optimistic, such as the anonymous author of the pamphlet Hoch lebe die Preszfreiheit! Nieder mit der Preszfrechheit! (‘Long live press freedom! Down with press insolence!’), who praises the principle of a free press but bemoans the what he sees as, ‘insolent, salacious, lying, bilious and pernicious pamphlets’ appearing on the streets as a result of the lack of censorship. 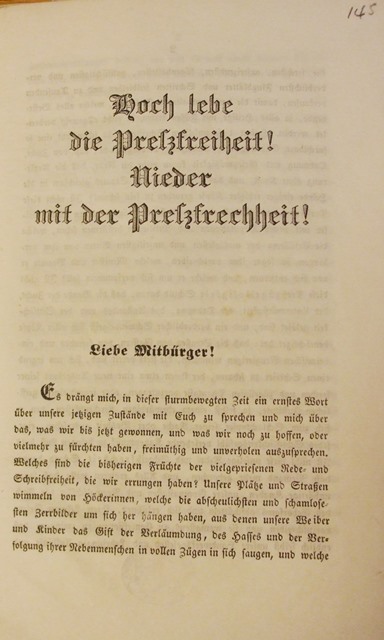 This criticism was aimed at writers such as Sigmund Engländer, a more radical fellow-signatory of Castelli’s petition and editor of Wiener Charivari-Katzenmusik, one of the many new critical and satirical journals that sprang up in the course of the year. But despite the criticism thrown at them, these writers were in many ways the heroes and pioneers of the free press during the Revolution. Even if their satires were sometimes crude or potentially libellous, like opponents of censorship throughout the ages they were pushing boundaries, mocking sacred cows and raising the question of what could or should be said, a bolder and more creative approach to new freedoms than Castelli’s somewhat patronising and paternalistic lectures. 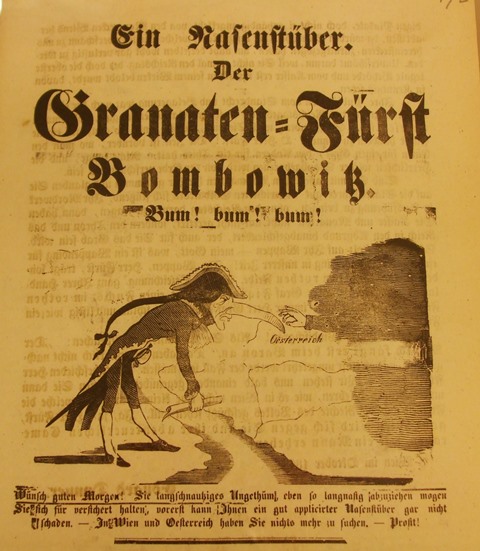 Writers like Engländer were inevitably disappointed when the promised new press law was published. Lèse majesté, libel, treason or incitement to unlawful activity were still punishable by up to five years imprisonment, and the law demanded that all works must bear the name of an author, editor publisher or printer, who could be identified as responsible for any offence. In a skit on the new guidelines (1899.m.19.(153)), Eduard Leidesdorf posed a riddle: ‘Why was the Press Law rejected? Because no author, publisher or printer was named’ (as was often the case with official documents). By 16 August Engländer clearly thought things had got so bad that he added ‘A few days before the reintroduction of censorship’ to the masthead of his journal, and devoted the front page to an attack on the press law. 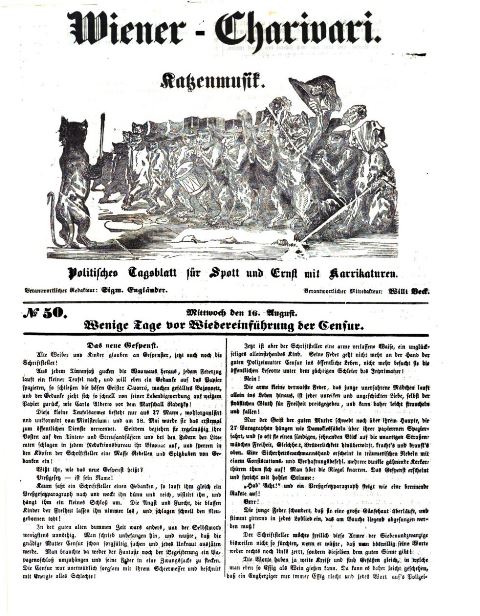 But as early as April, when the press law was first published, an article in Der große Peter had printed a satirical ‘letter from Metternich’ in which the former Chancellor claims that the new law is a better means of preventing free speech than his own system of censorship. In fact Der große Peter is almost exclusively focused on questions of press freedom and press law. In its opening number, the editor claims to have discovered an ingenious way of avoiding taxes levied on political periodicals issued more than once a month: he will re-name the journal for each day of the month, making it ‘thirty newspapers instead of one!’. However, only one further issue was published, under the title Der Stutz-Peter. While very short-lived periodicals were typical of the period, in the case of Der große Peter it is possible that the whole exercise was a satire on the press law and never intended to be a genuinely long-running publication. 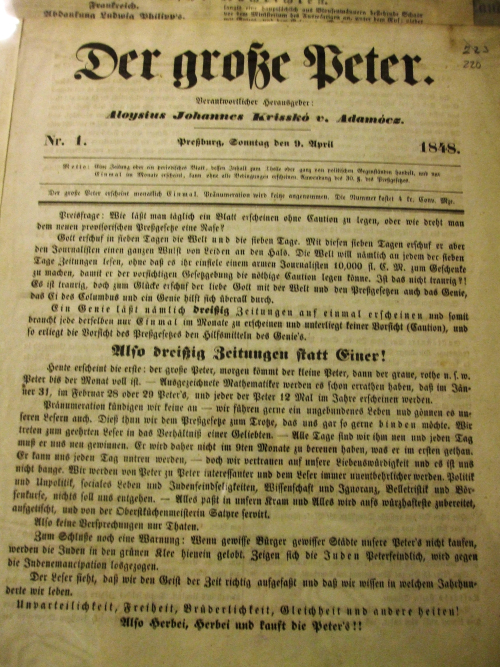 Radicals might have thought that the 1848 press law was too draconian, but far worse was to come. Following a second revolutionary uprising in October 1848, Vienna was besieged by the Imperial army under General Windischgrätz. In a series of ultimatums to the city, Windischgrätz demanded the banning of all newspapers and periodicals (with the exception of the long-established Wiener Zeitung, which was only to print official proclamations). When the army finally gained control of Vienna on 31 October, this was reiterated, and the printing, posting and circulation of broadsheets and pamphlets also forbidden. Gradually newspapers began to reappear, mostly established and conservative titles. Only one of Vienna’s new satirical journals survived: Johann Franz Böhringer’s Die Geißel, the only one to have been on the side of the establishment throughout. In 1849 a new and stronger press law was introduced, and press censorship continued in Austria until the proclamation of a republic in 1918.

This blog is part of series for Banned Books Week 2016. See also Melvin Burgess’s blog on Censorship and the Author, curator Christian Algar on the ‘corrected’ Decameron, curator Tanya Kirk on The Monk, the Bible and Obscenity, The Book Banner who inspired Banned Books by curator Alison Hudson and Banned From the Classroom: Censorship and The Catcher in the Rye by curator Mercedes Aguirre.