The roaring success of the BBC’s television adaptation of War and Peace earlier this year  got me thinking about Tolstoy’s history with English-speaking audiences.

Back before television or radio, English speakers were introduced to Tolstoy’s work by two translators above all: Constance Garnett and Aylmer Maude. They, along with several cultural commentators and travel writers, have been more broadly credited with opening British eyes to Russian life and culture in the early 20th century. Maude, who I first encountered through an obscure book of his in the British Library’s collections, seems to be forever crossing paths with me, and he is my subject here. The son of an Ipswich clergyman, he went to Russia, aged 16, in 1874, with no previous ties to the country. He studied at the Moscow Lyceum and worked as an English-language tutor before marrying the daughter of a British jeweller in the city and pursuing his own career in business. Maude’s company was Muir and Mirrielees, the largest department store in Russia, and he easily made enough money to retire before he was 40 in order to take up his real, literary interests. His wife, Louise Shanks, born and raised bilingual in Moscow, was the scion of a family  whose significant artistic and literary interests were as notable as their business success. Her sisters Emily and Mary were both artists; Mary was Tolstoy’s illustrator. Louise herself was also an acolyte of Tolstoy’s in youth, and during the 1890s she and Aylmer set to work translating his books into English. Louise concentrated on Tolstoy’s literary output, while Aylmer dealt more with philosophy and politics.

A radical activist who was later a leading light in the Fabian Society and co-operative movement in Britain, Maude also produced his own books, including a slim volume on the coronation of Nicholas II. This was published pseudonymously as The Tsar’s Coronation, as seen by De Monte Alto. As a committed Christian of a puritanical bent, he spared few words describing what he saw as the excesses, hypocrisy and incompetence involved in the Coronation. 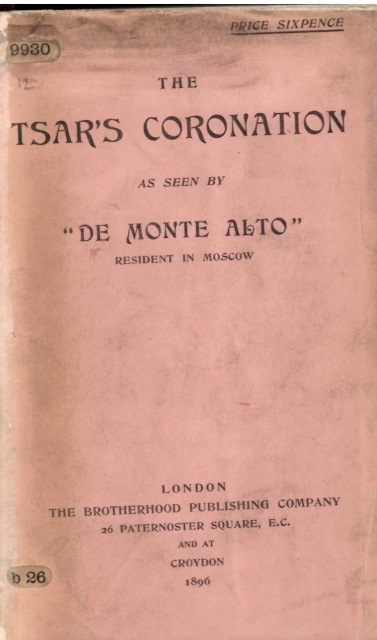 Where other memoirists and journalists lapped up propaganda or sought to ingratiate themselves with high society, Maude portrayed the pageantry in the most banal light, as a welter of vulgarity centered upon an unworthy subject at the expense of the majority of the Russian people. This harsh, deflationary, often very funny, little book is the means by which I first encountered him, before I was aware of his fame as a translator. 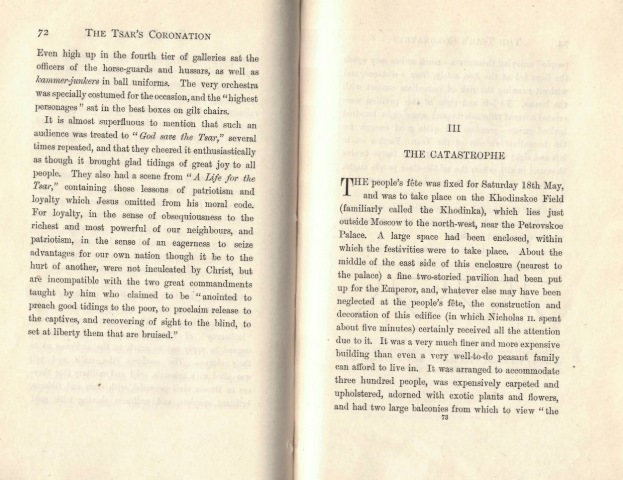 From translation, Maude proceeded to biographies and critiques of Tolstoy, which he defended as the most accurate available, since “Countess Tolstoy…most kindly rendered me the very valuable assistance of reading and correcting.” He stayed with the Tolstoys frequently at Yasnaia Poliana and Moscow, and accompanied the religious dissidents, the Dukhobors, to Canada at Tolstoy’s request. This led to a certain disillusionment with the practicality of the great writer’s principles. “I have aimed at explaining Tolstoy’s views clearly and sympathetically,” he wrote, “but when necessary I have not shrunk from frankly expressing dissent; and in doing so I have but trodden in his footsteps, for he never forgot the duty of frankness and sincerity which an author owes to his readers. In response, one reviewer accused him of a “dense lack of understanding” of Tolstoy and of whitewashing everyone BUT Tolstoy! Maude also engaged in some notable intellectual feuds with Max Beerbohm and with Leo Wiener of Harvard University. His defenders included fellow Fabian George Bernard Shaw.

The Maudes settled in Essex in 1897, but returned to Russia frequently until after the Revolution, in which his wife’s family lost their businesses, their homes and a great deal of money. Russia, Aylmer said sadly, had simply replaced its “devotion to God and the Tsar”, a theocratic system he regarded as a perversion of real faith, with “devotion to a dictatorship which abolished God”.

In the UK, he became involved as a trustee of the Whiteway Colony, which is close to where I grew up. I also visit Chelmsford regularly, where the museum holds a picture he and Louise once owned, a work by his sister-in-law, Emily Shanks, a member of the Peredvizhniki (“Wanderers”) group of artists. Hence my feeling that wherever I go in life I seem to stumble across him! The British Library holds many papers of his, including his correspondence with the Society of Authors (Add MS 56746-56749), and with Marie Stopes (Add MS 58487-58490).