In 2016 we have been commemorating the 400th anniversaries of the deaths of both Cervantes and Shakespeare. Today, however, we look at a literary figure who was born in the year of those deaths, Andreas Gryphius. 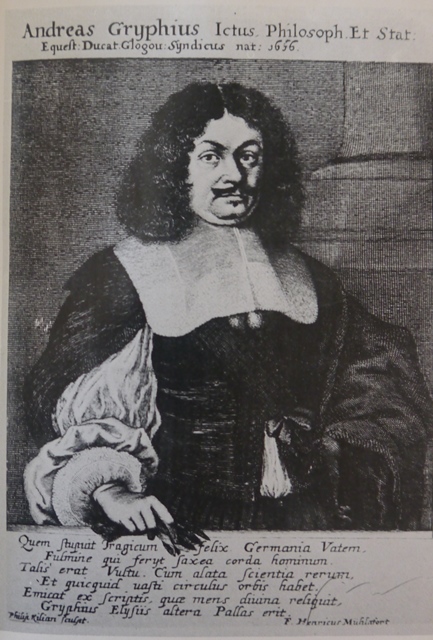 Gryphius was born in Glogau in Silesia, today Polish Głogów, on 2 October 1616 although some sources claim 11 October as the date, possibly a confusion of birth and baptismal dates, but more likely due simply to roman numerals being read as arabic ones. His early years were marked by personal loss and the upheavals of what would become the Thirty Years’ War. His father died when he was four years old, his mother seven years later, and young Andreas spent the following years moving between various Silesian towns, living with his stepfather or other relatives and patrons, sometimes attending school and sometimes studying independently. In 1638 he entered the University of Leyden, a centre of European scholarship and a refuge from the ongoing war in the German territories, where he could develop his literary and academic talents in an atmosphere both politically safe and intellectually stimulating. After six years in Leyden and a further four travelling around Europe, Gryphius returned to Silesia and in 1649 was appointed Syndic of his native Glogau, a post he held until his death in 1664, despite being a Protestant in a state that, since the Peace Of Westphalia, was under Catholic control. Alongside the duties of his post, he continued the writing career which had begun in his teens.

Despite the vicissitudes of the Thirty Years’ War, German literature was enjoying something of a renaissance in this period, with writers such as the founders of the Fruchtbringende Gesellschaft (modelled on the Italian academies) seeking to give German a new status as a language of literature and scholarship. Gryphius became a member in 1662, and was given the sobriquet ‘der Unsterbliche’ (the Immortal), which suggests the esteem in which contemporaries held him, although it  has some poignancy in retrospect given that Gryphius was dead within two years of his election to the society. 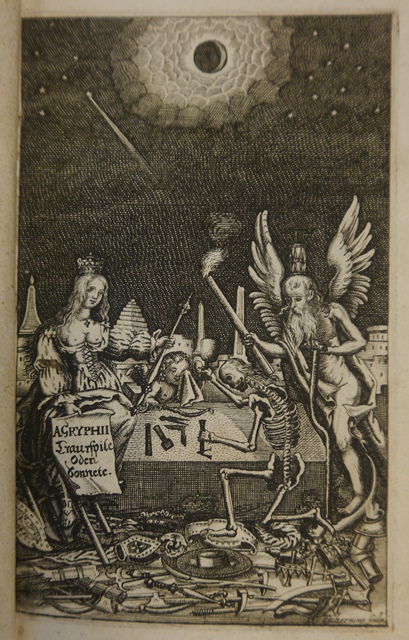 As well as poems and plays Gryphius wrote factual prose works and was not afraid of controversy. One of his first published works, Fewrige Freystadt, describes the fire that devastated the Silesian town of Freystadt (modern-day Kożuchów) in 1637, and openly criticises the authorities for failures in dealing with the crisis. In his early years as a Syndic in Glogau, he published a collection of historical documents Glogauisches Fürstenthumbs Landes Privilegia ... (Lissa, 1653; 1502/223) intended to demonstrate to the ruling Habsburg Emperor that local freedoms had a long precedent and could not be overturned by a centralising absolutist state. But it is for his poems, and perhaps even more his plays, that Gryphius is best remembered today. The plays include both tragedies and comedies (among the latter the splendidly titled Horribilcribrifax Teutsch), and interestingly one of each has an English connection.

The tragedy Ermordete Majestät, oder Carolus Stuardus is unusual for its time in dramatizing a near-contemporary event, the execution of the English King Charles I in 1649. Although the play was not published until 1657, Gryphius began work on it soon after hearing of Charles’s execution, and he later revised it partly to take account of the Restoration. The action is relatively static: various groups of people discuss the reasons for or against the execution and the possible repercussions of regicide, Charles prepares to die a martyr, and a series of allegorical choruses comment on the situation. Gryphius strongly takes the royalist side, and seems to have a low opinion of how the English treat their monarchs in general: in Act I the ghost of Mary Queen of Scots lists a number of murdered kings (who later appear as a chorus) and reflects ‘Es ist der Insell Art’ (‘It is the way of the Island’ [i.e. Britain]). 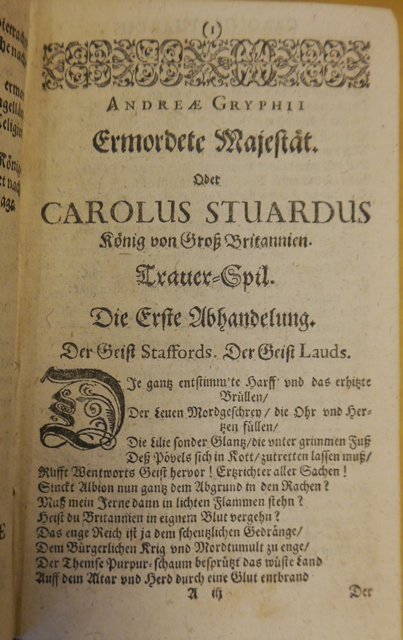 Gryphius’s ‘English’ comedy is Absurda Comica, oder Herr Peter Squentz, essentially a version of the ‘Rude Mechanicals’ material from Shakespeare’s A Midsummer Night’s Dream, although leaving out the fairies and Bottom’s transformation. The comedy shows the schoolmaster Peter Squentz and his players preparing their version of Pyramus and Thisbe and presenting it to drama-loving King Theodorus and his court in the hope of winning favour. Their rustic language, outmoded poetic style and frequent blunders cause great amusement among the aristocratic audience, and the play is sometimes described as a satire on common folk who pretend to be learned and talented above their station, but Squentz and his company are nonetheless shown to come off well since Theodorus rewards them with 15 Gulden for every mistake. 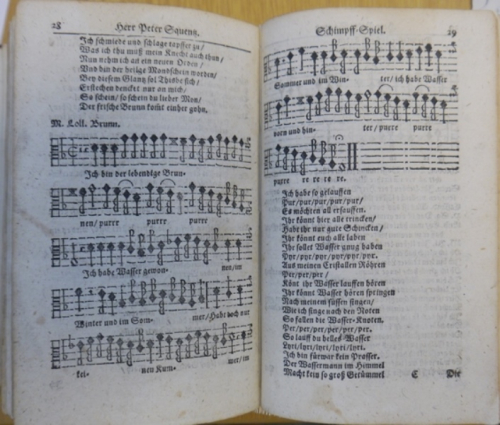 A song performed by the weaver and Meistersinger Lollinger in Absurda Comica, oder Herr Peter Squentz, from the collection A Gryphii Freuden und Trauer-Spiele auch Oden und Sonnette (Leipzig, 1663) 11745.a.55. It is a parody of the Meistergesang style, widely considered outdated by Gryphius’s time.

Gryphius claims to have adapted his work from that of Daniel Schwendter, revising and improving Schwendter’s text. It his highly unlikely that either Schwendter or Gryphius knew Shakespeare’s original play, but quite possible that either could have seen a version of it –or of the Mechanicals subplot – performed by travelling English players on the continent, an idea supported by the fact that one of Gryphius’s characters is called Pickelhäring, the name of a stock fool character among such troupes.