In 1995 a tiny book of great significance for Anglo-Serbian relations was donated to the British Library. It is a brief account of the life of Florence Maw and a record of her years in Serbia and Yugoslavia from 1915 to 1953. The book was privately printed in London in 1957 and only three copies are recorded in British public collections. 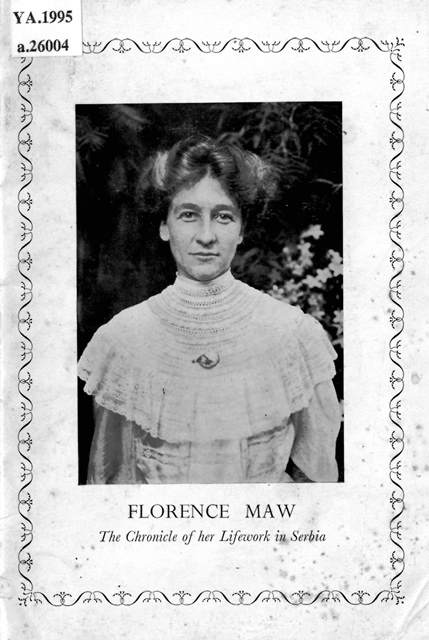 Maw was one among the hundreds of British women who volunteered their services for Serbian people in the First World War. She was a native of Cheshire, from a Quaker family, and during the war served as a member of the London-based Serbian Relief Fund, a charity formed in 1914 to provide humanitarian aid to Serbia.

This biography also sketches a portrait of Jean Rankin, Maw’s lifelong friend and collaborator, who was among the first to go to war-torn Serbia, whose people were in dire need of help. Rankin served as a trained nurse in the Serbian Relief Fund’s first hospital in Skopje in 1914, while Maw served as an orderly in the Fund’s third hospital in Kragujevac in 1915. They assisted soldiers and civilians affected by war and lived through the great typhus epidemic  Maw took part in the gruelling retreat of Serbia in 1915.

Although only a short biography drawing on a few surviving personal records, the book provides an insightful account of the work of the Serbian Relief Fund. Thanks to the generosity of the British people the Fund organised six hospitals for Serbia, looked after 65,000 Serbian prisoners of war, and supported the education of over 300 Serbian children in Britain, among other humanitarian efforts.

After the liberation of Serbia in 1918, the Serbian Relief Fund played a prominent role in bringing relief to the devastated country. Serbia lost over 22% of her pre-war population and up to 250,000 Serbian children were orphaned by the end of the First World War. In the aftermath of the war the Fund worked with the government of the Kingdom of Serbs, Croats and Slovenes to establish modern medical and social institutions primarily for the care of children, disabled war veterans and the sick people.

Funds raised by British children for Serbian orphans during the war were used for the creation and upkeep of an orphanage in the town of Niš in Serbia. In 1919 Maw was put in charge of this orphanage which, in the absence of any suitable housing, was accommodated in a dilapidated former poorhouse. 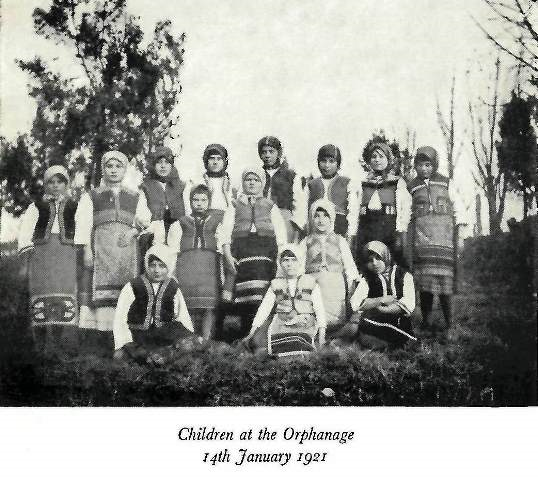 Serbian orphans in the countryside. The Home’s annual summer camp was set up in the hamlet of Manastir in Sićevo, 20 kilometres east of Niš. From Florence Maw.

As the work of the Serbian Relief Fund was ending in 1921, the Committee decided to invest the remaining funds in a purpose-built modern orphanage in Niš. Construction began in 1924 in the grounds of the St. Pantaleon Church, between the village of the same name and the Nišava River, two kilometres from the town centre. Maw closely supervised the building of the orphanage designed by Iulian Diupon, a Russian émigré architect. 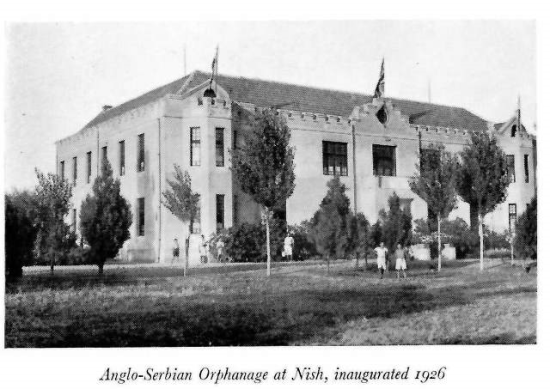 The Anglo-Serbian Children’s Home was built to accommodate 50 children and about six staff. It had a large open space around it with a garden, an orchard, and a large playground. Its inauguration on 7 November 1926 was a local and national event in the presence of Prince Paul and Princess Olga, government and church officials, British envoys and guests, and Church of England delegates. The Serbian Relief Fund was represented by Mrs Carrington-Wilde, a former president of its subcommittee for the education of Serbian children in Britain, who came from England for the occasion. She continued to visit the Home every two years on behalf of the Serbian Relief Fund estate. The Home was mainly funded by a proportion of the interest earned from the Fund’s final investment, deposited for this purpose in 1921. Other income came from donations from the local authorities, charities and people of Niš.

Maw and Rankin were responsible for the children’s upbringing, with a focus on discipline, practical training and traditional moral values. Children were brought up in the Orthodox tradition and religious holidays were observed according to Serbian and British customs. The children were directed according to their potential or abilities to apprenticeships, the army, engineering, nursing, commerce, teaching, law or religion. Maw was known in Niš and at the Home as “Sister Mother” (сестра-мајка), a term of respect used in Serbia for British nurses in the First World War. She had great authority over the children but never mastered Serbian and addressed her protégés only in English as “my child”.

The book finishes with a chapter on her precarious life under German occupation and the struggle to keep the children safe in the vortex of the Second World War. The Gestapo had taken possession of the Home and by the time the children were allowed to return at the end of 1944 the Home and its estate had been plundered and damaged, and the country was under the control of Yugoslav Partisans.

After the Second World War the communist authorities sought to undermine the Home’s strong link with the Serbian Church and to impose their own ethos and values. These pressures ultimately led to Maw’s and Rankin’s resignations and the handover of the Home to the city of Niš in 1946.

Maw and Rankin decided to retire on modest state pensions to a little cottage in Dubrovnik. In 1951 they made a final visit to Britain before returning to Yugoslavia. Rankin died suddenly in 1952 and only a few months later Maw passed away. Two of Maw’s devoted war orphans were beside her until the end. 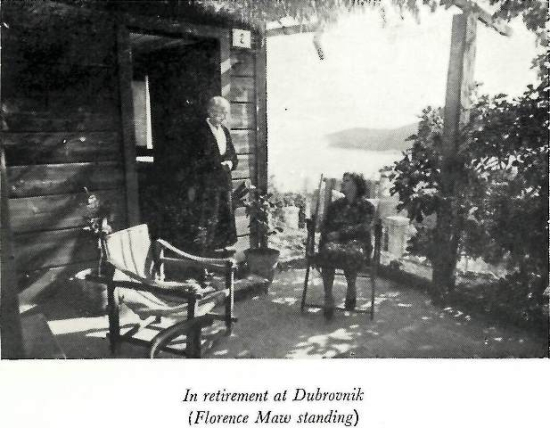 The cottage in Dubrovnik where Maw and Rankin lived in retirement from 1947 to 1953 (From Florence Maw).

In 1954 on the initiative of a former member of the staff of the Home, the Serbian Church had a marble plaque made with the following inscription: “To the Glory of God and in memory of Florence Maw and Jean Rankin who devoted their lives to the service of the children of Serbia, 1915-1947.” 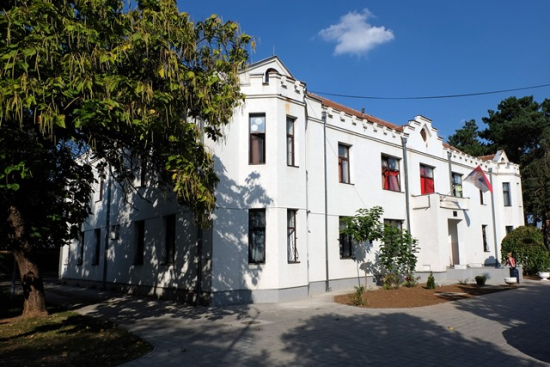 The Home today is a listed building widely known as “The English Home” (Енглески дом). Since 1965 it has been a hall of residence for High School Students. Photograph © Bratislav Arsić, 2016.

In 1953 the British authorities transferred the ownership of the Home to the Yugoslav authorities on two conditions: to serve its original purpose as a home for children, and to set up a Serbian Relief Fund commemorative plaque on a wall of the Home. A 1938 bust by the sculptor Slavko Miletić of Mrs Carrington Wilde in front of the Home.The Serbian inscription reads “A great friend of the Serbian people.” The bust was removed from the courtyard in 1948 but reinstated in 2004.
Photograph © Bratislav Arsić, 2016.

The Anglo-Serbian Children’s Home is a lasting memorial to the work of the Serbian Relief Fund. It represents the outstanding achievement of a band of truly exceptional people who made a difference in the First World War. Its archives were destroyed in the Second World War, but we can assume that several hundred orphaned children were brought up by this institution from 1919 to 1946.

The Home will celebrate its 90th anniversary on the present site on 7 November 2016.