Readers may remember a blog post some time ago featuring  a manual for Czech servicemen simultaneously fighting alongside their British comrades to repel the threat of invasion and struggling with the English language. They were not, however, the only ones forced by history to grapple with a new language and bewildering customs.

The British Library holds a copy of a curious little book published at the modest price of three shillings and sixpence and ‘specially compiled to help the mistress and her German-speaking maid’ by Elsa Olga Hollis. Nothing is known about the author, who claims in the preface that she was encouraged to publish her work by friends and their foreign maids who had used her as an interpreter. She acknowledges the help of ‘Miss Lorna Yarde Bunyard’, who typed the manuscript and revised the English, and was presumably responsible for some of the oddly unidiomatic expressions and misprints, as when the maid is directed to close, not the Flügeltür (French window), but the Flügeltier, a strange winged creature.

Deutsche und englische Haushalt Phrasen und Wörter  first appeared in May 1937 and by November of that year had already gone into a third edition. Clearly it was in great demand – but why? 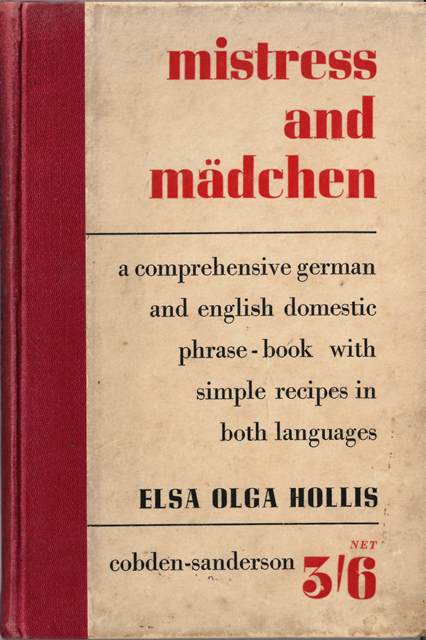 Hollis’s book was published some months before the British government introduced a visa requirement for refugees seeking entry from Germany and Austria following Hitler’s annexation of Austria in March 1938. Many of the women who arrived as domestic help came from wealthy and cultured families which employed servants, and had never had to make a bed or lay a table in their lives, let alone ‘throw the ashes and hard clinkers into the dustbin’, ‘empty slops and wipe utensils dry’ or tackle the ‘light work … getting tea, cleaning silver, ironing, mending clothes, cleaning out cupboards and so on’ between three o’ clock and the preparation of the evening meal. Marion Berghahn’s Continental Britons: German-Jewish refugees from Nazi Germany (revised ed., Oxford, 2007; YC.2007.a.9766) notes the psychological adjustments needed and the frequent insensitivity of employers who ‘lacked any clear ideas of their domestics’ backgrounds’ and exploited them mercilessly as cheap labour.

In fiction, characters who arrived in England in this way appear in Natasha Solomons’s  The Novel in the Viola ([Bath], 2011; LT.2012.x.1871) and Eva Ibbotson’s The Morning Gift (London, 1994; H.95/761). Both authors recalled the experiences of relatives who escaped from Austria in the 1930s on domestic service visas, like Solomons’s Elise Landau, who confidently advertises ‘Viennese Jewess, 19, seeks position as domestic servant. Speaks fluid English. I will cook your goose’, or Ibbotson’s heroine Ruth Berger’s Aunt Hilda, an eminent anthropologist but inept housemaid who is repeatedly bitten by her employer's pug and gets the sack when she brings a glass-fronted bookcase crashing down on her while attempting to dust.

In Mistress and Mädchen the adventure begins with ‘Meeting the Boat’ (‘the crossing was (very, not) good, bad. I have (not) been seasick’), the Customs, and a train journey, culminating in ‘Arrival at the House’ (‘the chauffeur will bring in the rest of your luggage’) and ‘A Little Talk over Tea’, where the mistress of the house presses jam, cake, rolls and pastries on Marie, the new housemaid. She is informed that she will have to undertake the housework and all the cooking, though a charwoman comes for the rough work (‘grobe Arbeiten’), and assured ‘Sometimes we will try your native cookery’. Weekly and daily plans for housework are included, beginning with washing day on Monday (‘Here is the wash-tub, washing machine, soap, soda, soap-powder, Lux, copper stick, Blue and starch, mangle’) leading to the puzzled enquiry, ‘We do not “air” clothes at home. Why is it done?’), whereupon it is explained that ‘in England the air is so moist that everything gets damp’. Weights, measures and ‘really economical’ recipes are provided, together with precise instructions about how to make tea and ‘Toast machen’. One can picture poor Marie’s perplexity when requested to prepare ‘Reis Pudding’, ‘Talg-Puddings’ (the unappetizing translation of ‘suet puddings’), and ‘Minzmeat Pasteten’ for Christmas, not to mention ‘Rührei auf Toost’.

A culture shock for Marie? The recipes for mincemeat and mince pies from Deutsche und englische Haushalt Phrasen und Wörter

Not surprisingly, the heavy work, unfamiliar food and peremptory demands of her mistress (‘You will have to wait at table. See what Baby wants. You must finish your work sooner’) take their toll on Marie’s health, spirits and digestion. ‘What is wrong with you?’ barks Madam, to be met with a catalogue of ailments: ‘I have head-, eye-, ear-, tooth-, stomach ache. …I have a cold in the head, a nosebleed, a cough, indigestion’ (it must be all those tallow puddings). The plaintive query ‘Do I give satisfaction?’ receives only the chilly reply, ‘I have no reason to complain’, and the domestic tyrant continues ‘Be more careful with the breakable things…. If that happens again I shall have to give you notice! … I must send you back home’. Finally, the worm turns: ‘I wish to give notice,’ announces Marie. Triumphantly, her mistress brandishes the permit: ‘This permit is valid only for the particular employment for which it is issued … If you wish to leave now, I am afraid you will have to go home’.

It would be pleasant to think that Jan Novák, the Czech airman from Vojáci, učte se anglicky!, was invited to tea in the household and captivated by the sight of Marie, trim in her afternoon uniform (‘black, brown or wine-coloured dress (wool), small cap, and “afternoon” apron’); their eyes meet over the tea-tray, and they arrange a tryst in her meagre leisure time (‘one afternoon and evening a week and every other Sunday afternoon and evening free’), shyly exchanging phrases from their respective handbooks… One fears not. The German preface, unlike the English one, emphasizes the need to rise early, work quickly, and suppress any homesickness, ‘taking a great interest in everything new’ instead. But despite the unhappiness which many a Mädchen (of whatever age) endured, the domestic service visa was, all too often, a life-saver.