Pavlo Kovzhun or ‘adopt his enthusiasm...’

When Filippo Tommaso Marinetti explained his view of the beauty of the contemporary world, in his first Manifesto of Futurism (1909), Pavlo Kovzhun was only thirteen. A few years later he already considered himself to be a Futurist, but at the same time did not care for the radical Italian’s desire to “exalt aggressive action, a feverish insomnia, the racer’s stride, the mortal leap, the punch and the slap”.

In a short time this fact became the main point of difference in the experience of Ukrainian and Italian Modernism. However this was never a point of contention between Western European and Ukrainian artists – later Kovzhun, already an experienced artist, promoted Italian artistic classics of the 1900-1910s with admiration, showing his understanding of the audacity of this avant-garde movement.

In the history of Ukrainian modern art it is difficult to find a figure with equal enthusiasm and devotion to his art as Pavlo Kovzhun. The inheritance which he took from his idol Heorhii Narbut committed him to the exhausting work which drove him to his grave at the age of 43. But the scale of his creative work is enormous compared to the shortness of his life. 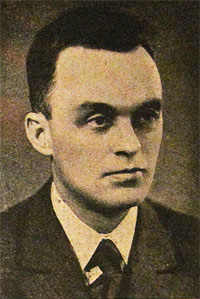 Pavlo Kovzhun was born on October 3, 1896 in the village of Kostiushky in the Zhytomyr region. He studied at  the Kyiv Art College from 1911-1915, where his teachers were Hanna Kliuer-Prakhova, Mykola Murashko, and Ivan Seleznov. From 1913 he began to show his works in exhibitions. Aged 18 he was one of the founders of the Futurist Literary Artistic Group.

His first artistic works (mostly graphic) were under the influence of the St Petersburg artistic group Mir Iskusstva, and its leading representative, Heorhii Narbut. The direction introduced by this outstanding graphic master appealed to the young artist – the recreation of the heritage of the old Ukrainian engravers. Kovzhun wholeheartedly shared the ideas of the young Kyiv intellectuals that new qualities of Ukrainian art should be built on the spiritual and aesthetic basis created in former times. This appeal to the period of the climax of the Kyiv-Mohyla Academy, recognized throughout Europe, seemed to Pavlo Kovzhun and some of his student friends (Robert Lisovs'kyi, Vasyl' Kryzhanivs'kyi and Anatol' Petryts'kyi) the best choice as a basis for their art. Later Kovzhun developed this idea theoretically, analysing some aspects of contemporary Ukrainian graphics, and also presented his own formal-aesthetic arguments to prove it. His first graphic works, marked by modernist stylistics, appeared in the prestigious St Petersburg journal Apollon (P.P.1931.pmf), and in some periodicals in Kyiv.

With the start of the First World War, and the Ukrainian National Liberation struggle, Kovzhun was at the front, creating printed matter for the army units, promoting Ukrainian national identity. He was one of the co-founders of the Hrunt publishing house and the Muzahet literary-artistic group. After the retreat with army troops and the government of the UNR (Ukrainian People’s Republic), in 1921 he edited the satirical humorous journal Izhak (Hedgehog) in Stanislav (then in Poland; now Ivano-Frankivsk). In the same year he moved to Lviv. ‘From now I begin to work,’ he wrote in a letter to the Ukrainian poet and intellectual  Mykola Voronyi. ‘I nearly lost my faith. I lived through the war in fire and revolution in blood, but still holding our banner. This is my nature. Now there is no blood, no fire, I pulled up my sleeves and took my brush and pen.’

In Lviv he initially worked on some private commissions (interior design, artistic decoration). In 1922 he became a member of the literary-artistic group Mytusa, and was a founder member and Secretary of the Group of Representatives of Ukrainian Art. As well as taking part in numerous art exhibitions, he cooperated with the editors of the periodicals Mytusa, Moloda Ukraina, Budiak, Masky, Zyz, Kul'tura, Nova Kul'tura, Svit, Mystetstvo, Universal'nyi Zhurnal, and Nova Heneratsiia. He was a member of the artistic group ‘Artes’ (Lviv, early 1930s), co-founder of the Association of Independent Ukrainian Artists (1931), of which he was also Secretary. 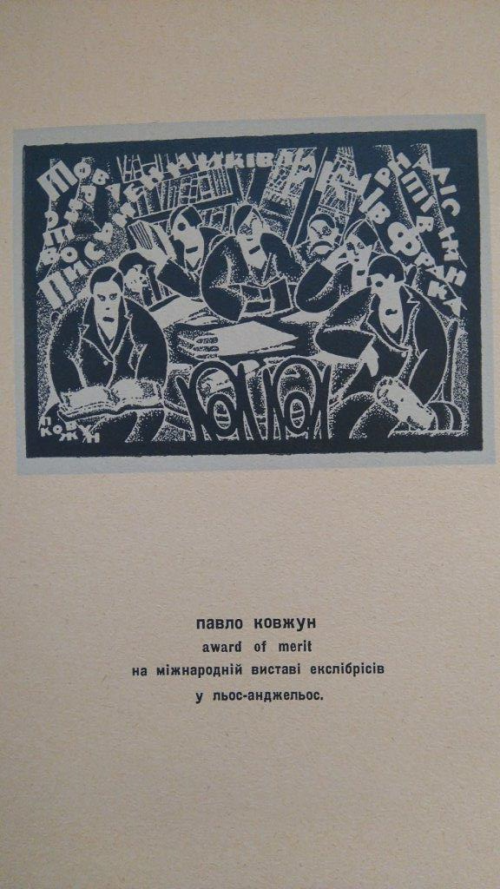 Kovzhun’s artistic legacy consists of hundreds of graphic works, dozens of paintings, and more than a hundred publications on art. In cooperation (mostly with M. Osin'chuk) he created frescoes in twelve churches in Galicia, which became exemplars of this type of work for his contemporaries, and have not lost their artistic value even at the start of the 21st century. But the most remarkable contribution of Kovzhun is in the area of book illustration and periodical design. He was responsible for the design of the most prestigious books published in Ukraine between the wars: books by Ivan Franko, Volodymyr Vynnychenko, Pavlo Tychyna, Osyp Makovei, Borys Hrinchenko, Mykhailo Staryts'kyi, Mykola Holubets' and others, and dozens of calendars and periodicals. Among his works are posters, caricatures, book-plates, publishers' logos and emblems, theatre designs and more. 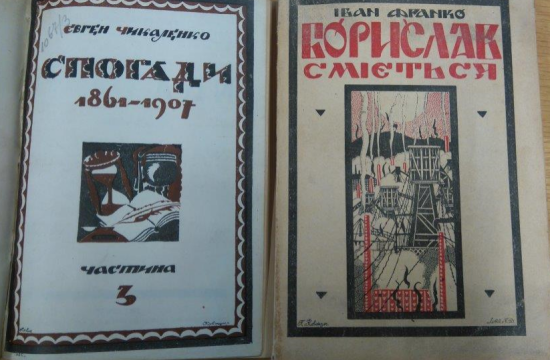 In his stylistic designs Kovzhun’s graphic works absorb in themselves a combination of the leading concepts of European visual art between the wars: Futurism, Expressionism and Constructivism. The basis of his artistic creations which he developed systematically as plastic equivalents of Ukrainian national style, was the concept of Neo-Baroque. In combination with these leading universal styles the majority of Kovzhun’s works are marked by his interpretation of Art Deco, which was recognized by famous artists and critics: articles about Kovzhun appeared in prestigious art journals, such as Grafika (Poland), Umeni Slovanu (Czechoslovakia), Gebrauchsgraphik (Germany) and others. 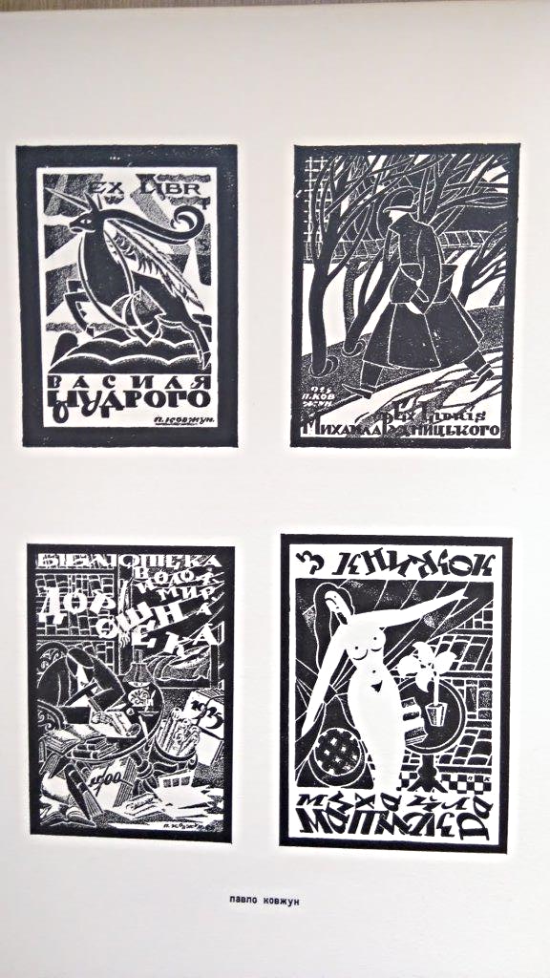 Pavlo Kovzhun died on May 15, 1939 in Lviv, and was buried in the historic Lychakiv Cemetery . He left a huge and varied artistic and theoretical legacy. His art and his mentality were full of the pathos of the creation of new values in Ukrainian aesthetic culture, which unites with the realities of 21st century art. 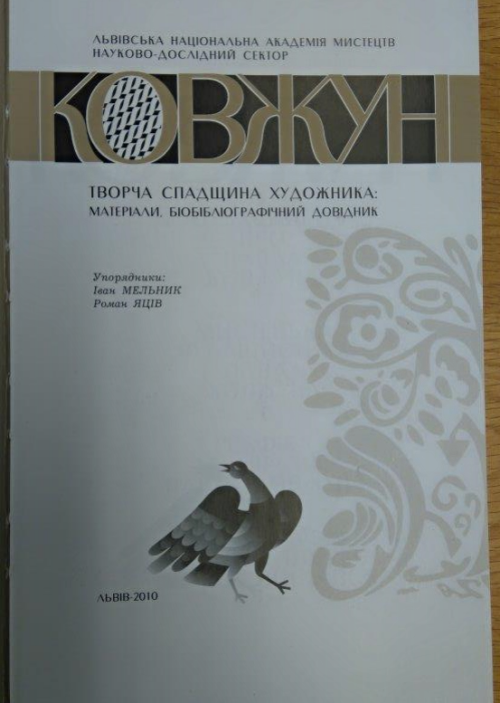