Shifting the Compass: Literature from the Dutch Antilles and Suriname

Five years ago, from 15-17 September 2011, The Dutch Studies Program at the University of California, Berkeley organised a conference on Dutch literature overseas: ‘Colonial and Postcolonial Connections in Dutch Literature’. A selection of papers presented at this conference was published as Shifting the Compass: Pluricontinental connections in Dutch Colonial and Postcolonial Literature (Newcastle, 2013; British Library YC.2013.a.14249).

In his introduction to the volume Jeroen Dewulf, states that ‘Dutch literature is much more than just literature from a tiny piece of land at the estuary of the Rhine. From the Carribean to Southern Africa and from Southeast Asia to Western Europe, the Dutch language formed a common bond in a literature that has been deeply marked by intercontinental connections.’

Dutch authors like Couperus, ‘Multatuli’, Hella Haasse, Marion Bloem and Adriaan van Dis, to name but a few, all had close ties to the Dutch East Indies. Their novels about the region address the issues surrounding colonial rule and are firmly placed in the canon of Dutch literature. This is reflected in the Library’s collections. For example, we hold various editions of Multatuli’s Max Havelaar, considered to be one the finest novels in the whole of Dutch literature.

The same cannot be said of literature from the other side of the world, Suriname and the Dutch Antilles (Aruba, Bonaire and Curaçao). With the exception of writers such as Frank Martinus Arion, Cola Debrot and Edgar Cairo only in Dutch, there is not the coverage of titles as the Dutch East Indies has. An author like Astrid Roemer, who this year received the P.C. Hooftprijs, the most prestigious literary award of the Netherlands, deserves every bit as much attention as Hella Haasse does. 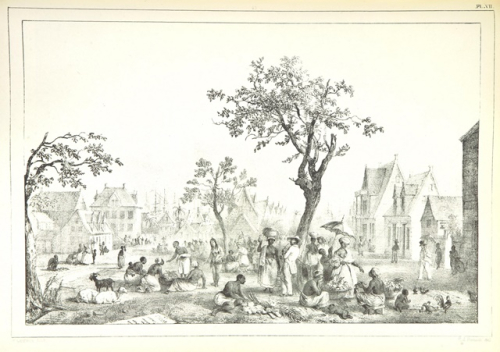 Earlier this year Frank Martinus Arion passed away, leaving a formidable corpus of novels, poetry, essays and critiques. Why is he not as famous as Van Dis?

There may be many reasons for this: bias towards the Dutch East Indies as somehow more important than the Dutch West-Indies, bias towards authors with a white Dutch background, who knows – curators are not perfect.

And yet the 5-volume Een geschiedenis van de Surinaamse literatuur (A history of Surinamese Literature) by Michiel van Kempen makes clear that there are rich pickings to be had among the literature from Suriname and the same is true for the Antilles.

I think it’s time to shift the compass and uncover the treasures of the literature from Suriname and the Dutch Antilles.

Posted by Susan Reed at 12:07:50 in Germanic , Literature , Netherlands