The Seagull has landed: 120 years of Chekhov’s ‘comedy’

Audiences who enjoyed the recent ‘Young Chekhov’ season of early plays which transferred to London from the Chichester Festival Theatre might be surprised to learn that the work with which it culminated, The Seagull – now generally regarded as the first of Chekhov’s four great mature dramas – was anything but a success when first performed.

17 October marks the 120th anniversary of the play’s première in 1896 at the Alexandrinsky Theatre, St. Petersburg. It is a work which provides more opportunities than most for things to go wrong (a lamp catching fire and a pistol failing to go off in an open-air production in which the present writer took part), and on the first night life imitated art all too closely. As the audience began to boo and hiss, Vera Komissarzhevskaya, in the role of Nina, the aspiring young actress, became so nervous that she completely lost her voice. Chekhov disappeared backstage after the second act, and, although outwardly composed, was so discouraged that he seriously considered giving up playwriting. 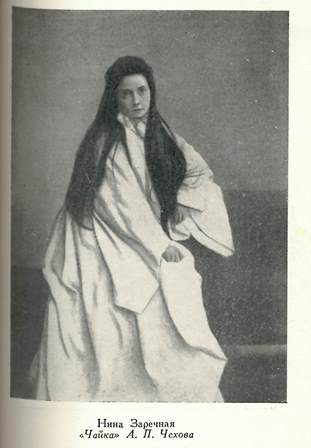 Nowadays The Seagull is recognized as a masterpiece in its subtle portrayal of the conflicts between youth and maturity, city sophistication and rural simplicity, and the literary values represented by the jaded urbane middle-aged Trigorin, a writer of short stories, and the eager young dramatist Konstantin, son of Trigorin’s mistress, the actress Arkadina. Konstantin’s experimental Symbolist play is greeted with the same bewilderment and mockery that The Seagull received at its first outing. In both cases the audience, failing to appreciate a drama which ran counter to their expectations, were loud in their condemnation; possibly those at the Alexandrinsky were disconcerted as a play advertised as a comedy revealed a succession of thwarted loves, hopes and ambitions and ended with a fatal pistol-shot. When Chekhov’s friend Vladimir Nemirovich-Danchenko assured him that later performances had been well received and urged him to let it be performed in Moscow, Chekhov initially believed that this was no more than a kindly attempt to reassure him. However, Nemirovich-Danchenko, a successful playwright, persuaded Konstantin Stanislavski  to put The Seagull on at the Moscow Art Theatre, and its opening night there, on 29 December 1898, became a landmark in Russian theatrical history. 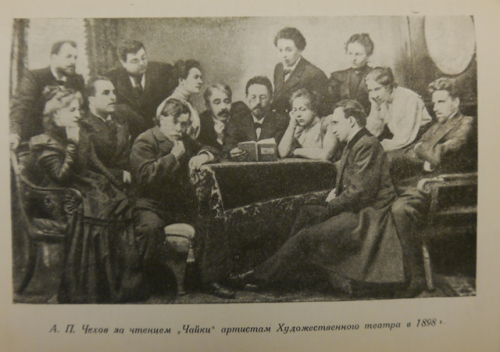 The British Library holds a translation of Stanislavski’s production score (1952; X5/6281) which demonstrates his psychological penetration of the text and skill in bringing even its most minute details to life. As Thomas Kilroy, who relocated the action to the west of Ireland in his adaptation The Seagull ‘after Chekhov’ (Oldcastle, 1981/93; YK.1994.a.1609) remarks in his introduction, ‘stars like to play minor characters in Chekhov, something which is not even true of Shakespeare’. Stanislavski gave precise directions to his company about such apparently insignificant points as a character’s way of laughing or taking snuff, and his attention to these was triumphantly rewarded. At Chekhov's suggestion he took over the role of Trigorin, playing opposite Olga Knipper, Chekhov’s future wife, in that of Arkadina. This time the play received universal acclaim from critics and public, with members of the audience so transfigured by the experience that one observer described them as ‘looking as if it were their birthday’.

From then on The Seagull never looked back. It was widely translated, with one of the earliest versions being an edition of Chekhov’s plays in Yiddish (New York, 1911; 17107.a.6) where it appeared as Der ṿaser-foygel. Elsewhere it took to the air as Måken in Norway, Die Möwe in Germany, and La mouette in Marguerite Duras’s French version (Paris, 1985; YA.1987.a.4430). The first British production was mounted at the Royalty Theatre, Glasgow on 2 November 1909, in a translation by its director George Calderon. 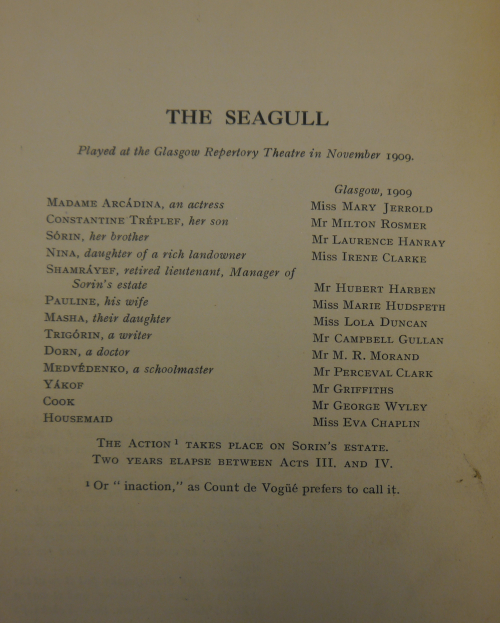 Cast list of the first British production of The Seagull, from Two plays by Tchekof, translated by George Calderon (London, 1912) 11758.cc.1.

The play also inspired a ballet score by Rodion Shchedrin (Moscow, 1982; f.541.aa) and an opera by Thomas Pasatieri with an English libretto by Kenward Elmslie (King of Prussia, PA, 2005; MUSIC H06/.10701), as well as numerous film versions, re-workings and adaptations by Tennessee Williams (1981), Regina Taylor (2004), Aaron Posner (2013) and others – most bizarrely, perhaps by the popular Russian crime writer Boris Akunin, whose version contains Chekhov’s original text followed by a continuation exploring the characters’ subsequent lives. 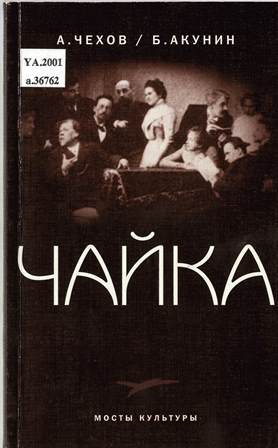 One thing is clear: unlike the seagull in Chekhov’s original play, shot by Konstantin and carried on dead halfway through Act II, The Seagull continues to soar to new heights 120 years after first taking wing. As Thomas Kilroy observes, `for all their sense of imminence, of the moment about-to-be, all Chekhov’s plays are rooted in an untidy present, full of inconsequentialities, of ordinary helplessness’, and it is this quality which gives The Seagull its timeless appeal.