The family of Henri Barbusse originated from a part of France with a strong radical tradition. He was born in Asnières-sur-Seine in 1873 to an English mother who died when Henri was three years old and a father whose Protestant forebears had lived in the hamlet of Anduze, near Alès, as far back as the 17th century. The Protestants of the Cévennes had suffered repeated persecution, and Adrien Barbusse, a journalist and theatre critic on Le Siècle, was anti-clerical and anti-monarchist by conviction. Not surprisingly, his son grew up to be an atheist, humanist and socialist, who, at the time of the Dreyfus affair, was convinced of the accused’s innocence. Henri wrote articles for La Paix par le Droit supporting international arbitration in place of war, and was also an enthusiastic supporter of Esperanto as a means to this end. 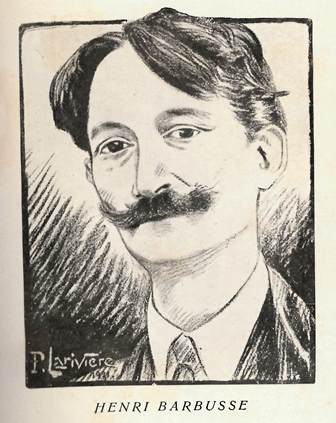 His earliest literary efforts were in poetry rather than political journalism, and in 1892 his entry for a poetry competition launched by L’Echo de Paris attracted the attention of the renowned poet Catulle Mendès, whose daughter Hélyonne he subsequently married. His first collection of poems, Pleureuses (Paris, 1895; reprinted 1920: 011483.c.74) was followed in 1908 by his first novel, L’Enfer (W16/3331), the story of a young bank clerk from the provinces who, bored and lonely in his dingy Paris lodgings, observes his neighbours through a crack in the wall. The sense of pessimism and human isolation which permeates its pages reflects the author’s awareness of the nationalism and militarism with which France was riddled, as destructive as the cancer destroying the body of one of the characters.

How prophetic this insight had been became clear with the outbreak of war in 1914. Although aged 41 and suffering from a lung condition, Barbusse did not hesitate to enlist, and in December 1914 joined the 231st infantry regiment, serving as a stretcher-bearer in the front line. Transferred to Artois, he was twice mentioned in dispatches for bravery before dysentery and chest problems caused him to be invalided out into a desk job in 1916. With time to reflect on his experiences, he began work on the book nowadays regarded as his masterpiece – Le Feu. 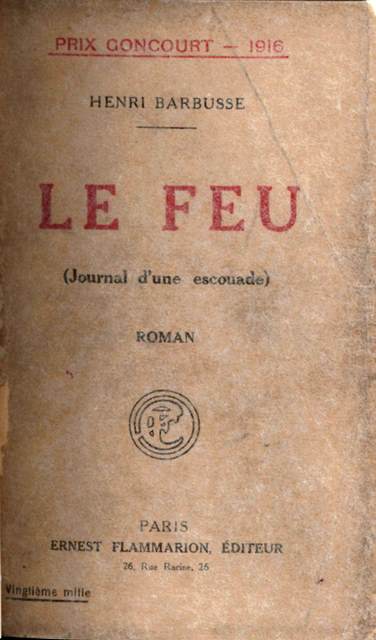 It was a shrewd move to publish the novel in serial form in L’Oeuvre, for this enabled Barbusse to outwit another enemy: censorship. His raw and outspoken portrayal of life in the trenches was calculated to offend the sensibilities of those who entertained sentimental notions of glorious death on the battlefield, not least by his unsparing use of the ‘gros mots’ employed by the common soldiers – farmhands, shopkeepers, manual labourers – experiencing the monotony, squalor and misery of life under enemy bombardment. With a blend of black humour and clinical precision he describes the coarse jokes and unexpected camaraderie of men all too conscious that at any time they may end up like the muddied, seared and mutilated remnants of humanity whose scattered limbs lie all around them. The first-aid post provides scant relief; the overtaxed doctors, trying to stretch their meagre resources to deal with the carnage confronting them, can do little to treat the horrific injuries of hundreds of casualties.

In Chapter 23, the narrator and his comrades spend a few days on leave in Paris, a completely different world where they encounter pen-pushers, comfortable in reserved occupations, and gushing women with romantic visions of young heroes rushing to die with a smile on their lips. The narrator swiftly realizes that there is little point in trying to convey to them any idea of the true nature of war – the purpose, as it were, of Barbusse’s novel - and the closing pages reveal an army of mud-caked ghosts stumbling about in the devastated landscape, ‘like the Cyranos or Don Quixotes that they still are’, as they acknowledge that they were no more than ‘honest killers. (…) The act of killing is always ignoble – necessary sometimes, but always ignoble’. In the final paragraph, a solitary voice declares, ‘If this present war had advanced progress by a single step, its miseries and massacres will count for little’, as a single ray of light breaks through the storm-clouds, `proof none the less that the sun exists’. The novel inevitably provoked strong and frequently hostile reactions, but its significance was rapidly recognized, and in December 1916 Barbusse received a letter informing him that it had won the Prix Goncourt. It would pave the way for other outstanding works based on wartime experiences, including Roland Dorgelès’s Les Croix de bois (Paris, 1919; 012547.aa.12) and Erich Maria Remarque’s Im Westen nicht Neues (Berlin, 1929; W13/8499). Barbusse himself became, in 1917, the co-founder of the Association républicaine des anciens combattants (ARAC) and a supporter of the Russian Revolution, making several journeys to the USSR and writing a biography of Stalin (Staline. Un monde nouveau vu à travers un homme: Paris, 1935; 20003.a.24). That same year, he died suddenly, aged 62, on 30 August during a visit to Moscow (some sources claimed that he was poisoned on Stalin’s orders, although his long-standing pulmonary trouble makes the official cause of death – pneumonia – at least plausible). He was also, however, one of the founders of the pacifist Amsterdam-Pleyel movement, and a prominent member of the Front populaire, attracting huge crowds to pay their last respects when, on 7 September 1935, he was buried close to the Mur des Fédérés in the cemetery of Père Lachaise. 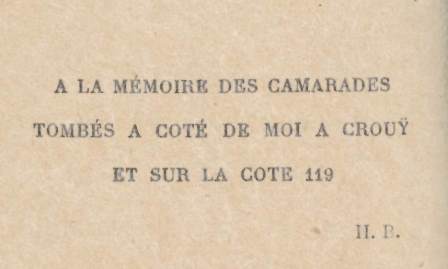 Le Feu bears a dedication to the memory of Barbusse’s comrades who fell beside him at Crouy and on Hill 119. Within a month of his joining his regiment, around half the men in his unit were killed on the front near Soissons. On Armistice Day, whatever Barbusse’s subsequent political views, it is fitting to remember not only those soldiers and the fallen on both sides but also his testimony to them as a moral witness.