‘In Catherine’s reign, whom glory still adores…’ : Catherine the Great in the British Library’s collections

On 16 November 1796 Catherine II of Russia had been Empress for 34 years, since the deposition and assassination of her husband Peter III in 1762. In accordance with her usual habit, she rose early and, after drinking her morning coffee, retired to her study to work on state papers. Shortly afterwards she retreated to her privy closet and, when her maid and manservant became alarmed when she failed to emerge, they broke down the door and discovered that the 67-year-old Empress had suffered a severe stroke. Unable to move her unwieldy body, they laid her on a mattress on the floor and summoned her Scottish doctor John Rogerson. He did what he could, but she never regained consciousness, and died the following night at around 9.45.

When she was born on 2 May 1729 as Sophie Friederike Auguste of Anhalt-Zerbst, there was little to indicate that this impoverished daughter of a minor German prince would achieve any kind of distinction. However, the Empress Elizabeth of Russia favoured her as a match for her nephew and prospective heir, Peter of Holstein-Gottorp, and although the young couple cordially disliked each other on sight, Sophie resolved, on arriving in Russia in 1744, to do whatever was necessary in order to become Tsarina. This involved conversion from Lutheranism to Russian Orthodoxy, and with it the adoption of a new name and patronymic – Ekaterina Alekseievna. The following year, aged 16, she and Peter were married.

The union, which produced a son, Paul, was predictably unhappy, and both parties had numerous liaisons. After Peter’s accession to the throne in 1762, they moved to the Winter Palace in St. Petersburg. It was here, where she had been left while Peter took a holiday in Oranienbaum, that Catherine learnt that a projected plot to dethrone him was in jeopardy, and had her husband arrested and compelled to abdicate. A few days later he was strangled by Alexei Orlov, brother of one of her favourites, though no proof exists that Catherine was aware of plans for this.

Despite queries about her right to succeed her husband, Catherine was crowned on 22 September 1762 and maintained her position for the rest of her life. Her reign was notable for a considerable expansion of Russian territory, absorbing the Crimea, Northern Caucasus, part of Ukraine, Belarus, Lithuania and Courland as a result of the Russo-Turkish Wars against the Ottoman Empire and the Russo-Persian War. She had long entertained ambitions to embody the principles of the Enlightenment in her rule, corresponding with Voltaire until his death in 1778 and incorporating his library into the National Library of Russia; she also invited Diderot to finish his Encyclopédie under her patronage when its anti-religious nature jeopardized its publication in France. Yet with the outbreak of the French Revolution she was forced to reassess certain of her principles, although she continued to support the arts, writing not only fiction and memoirs but plays, several freely adapted from Shakespeare, which were composed and acted in French by a company of French actors at her private theatre, the Hermitage, in the 1780s. The British Library holds copies of these in both French and Russian (St. Petersburg, 1786; 1343.h.6). 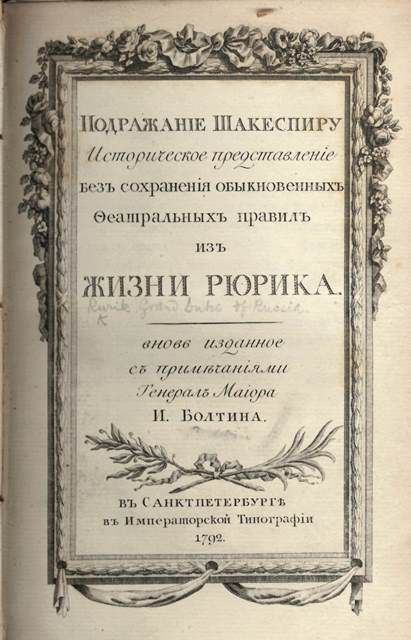 However dangerous the precedent established by her rise to power and territorial expansion, Catherine achieved considerable advances through her reform of the administration of the provinces of the Russian Empire and of the educational system. She established the Moscow Orphanage, intended to be run on enlightened principles but doomed to failure as most of its young inmates died prematurely, and, more successfully, the Smolny Institute for daughters of the nobility, the first institution of its kind in Russia providing education for girls. Her plans for a national educational system with an emphasis on co-educational free schools was far in advance of its times.

Catherine’s attitude to religion was also ambivalent.Her tolerance of Islam in allowing her Muslim subjects to assimilate their schools into the Russian system contrasted with her imposition of additional taxes on her newly-acquired Jewish subjects after the partitioning of Poland, and her establishment of a Pale of Settlement to contain them. 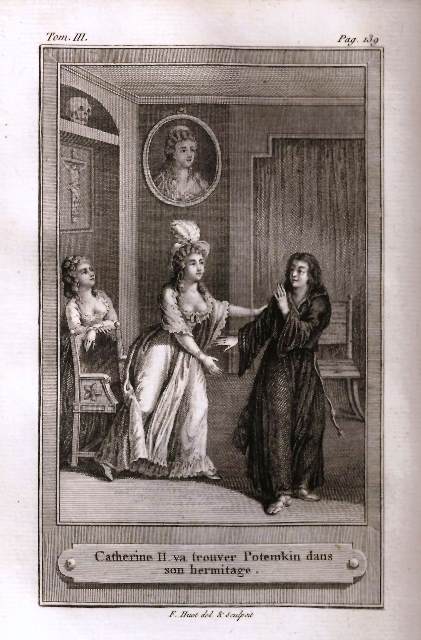 However, not all accounts of her reign were so scurrilous, and the fact that authors writing in other languages were prepared to devote considerable time and trouble to chronicling it testifies to their recognition of her importance. An example is J. H. Castéra’s Histoire de Catherine II, impératrice de Russie, published within four years of her death and recording her life and exploits in four volumes. 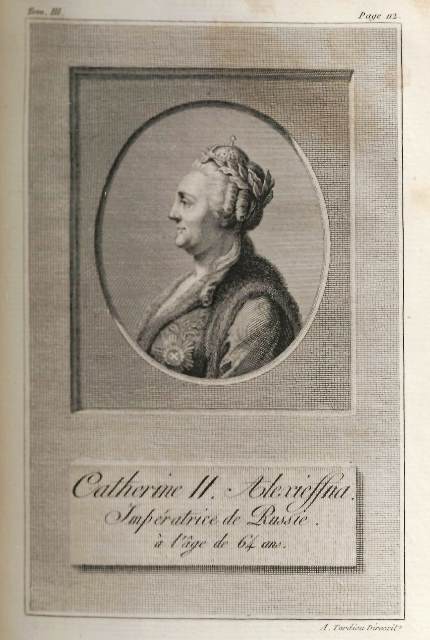 Perhaps it is fitting to conclude with a curious little book published in Kamchatka in 1797, L’ombre de Catherine II aux Champs Elysées (114.i.58). In it, the anonymous author portrays Catherine’s spirit arriving in the Elysian Fields to keep company with those of Louis XVI and Frederick the Great, discussing the politics of their times and speculating on the future. Her son and successor, Paul I, would see Russia embroiled in the Napoleonic Wars before suffering a similar fate to his father and being succeeded by his son, Alexander I. However unsatisfactory a ruler he became, there is some truth in the words which the author puts into his mouth as he reflects that the Empress had left him little to do but glean in her tracks: ‘tout ce que Pierre a conçu pour illustrer son pays, ma Mère l’a exécuté.’