Knud Leem and the Sami People of Finnmark

In a recently broadcast episode of the Sky Arts series Treasures of The British Library Professor Robert Winston looked at an 18th-century book from the King’s Library that includes some delightful images of Sami skiers. 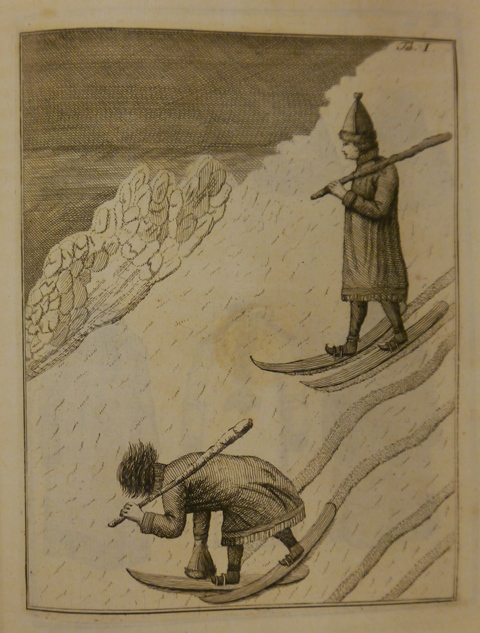 In the illustration chosen, the skiers can be seen on a downhill run, one nonchalantly balancing a pole on his shoulder, the other manoeuvring his skis to break his descent. As the author Knud Leem (in the 1808 English translation of the original text) describes it, ‘by a certain wooden machine, of an oblong figure, fastened to their feet, commonly called wooden sandals, they are carried with such rapidity over the highest mountains, through the steepest hills …. that the winds whiz about their ears and their hair stands on end’. 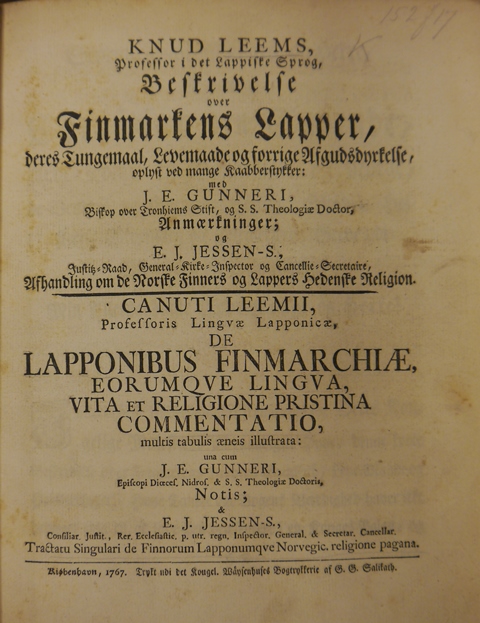 The book in which the illustration appears, Beskrivelse over Finmarkens Lapper, published in 1767, is a long and detailed (over 600 pages in the original) description of the Sami people of Finnmark  in northern Norway and was written by the Norwegian missionary and linguist Knud Leem who lived amongst the Sami for a number of years. The parallel text in Danish and Latin is accompanied by over a hundred illustrations by O.H. von Lode based on Leem’s descriptions, and together they provide a fascinating insight into how the Sami lived at this time. The subject matter ranges from the basics of everyday life such as shelter, clothes and food to reindeer herding, marriage customs and religion, the latter covering both the religion which Leem pointedly describes in the original title as that ‘previously’ practised by the Sami, and the Christian conversion which was the focus of his work. 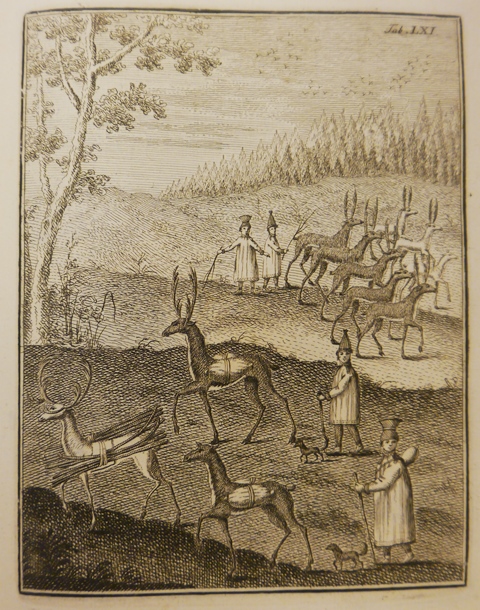 Leem’s father, also a priest, had worked in Finnmark for a number of years and it is probably from this family connection that Leem’s interest in the Sami people was originally awakened. He studied theology in Copenhagen (Norway was at that time part of the Danish kingdom and was yet to establish a university of its own) and while waiting for an appointment in the mission to become vacant, he spent two years in Trondheim learning the Sami language. In contrast to earlier attempts by missionaries to teach Danish to the Sami, Leem’s belief was that in order for missionary work to succeed, he and future missionaries needed to be able to communicate with the Sami in their own language. He writes that in this way ‘… a much greater progress in the salutary knowledge of the true God is made’. During the years he spent in Finnmark from 1725 to 1733, he would preach and conduct services in the Sami language, at times in the open air. 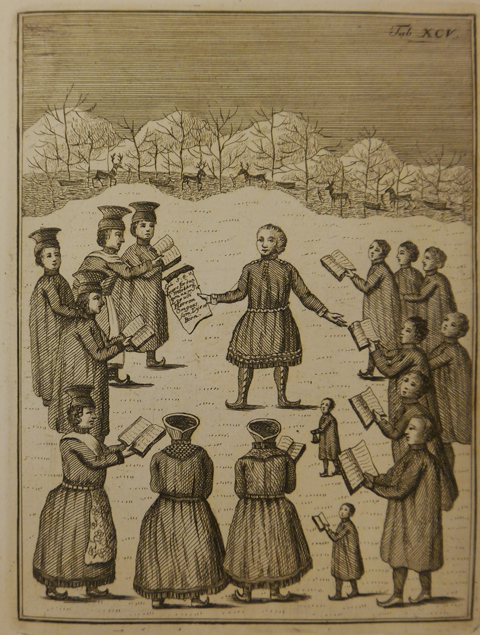 Conducting a service in the open air. From Beskrivelse over Finmarkens Lapper.

As well as his ethnographic work on the Sami people, of which there are three copies in the British Library, Leem also wrote a Sami grammar (En lappisk Grammatica, 1748), a Danish-Sami dictionary (En lappesk Nomenclator, 1756) and an extended Sami-Danish-Latin dictionary (Lexicon Lapponicum bipartitum, 1768-81, the second part of which was completed by Gerhard Sandberg and published after Leem’s death). Copies of the grammar and of the first dictionary form part of the Hannås collection, a collection of Scandinavian linguistic material donated to the British Library in 1984 by the antiquarian bookseller Torgrim Hannås. The Leem titles from this collection have now been digitised and are available online through our catalogue. 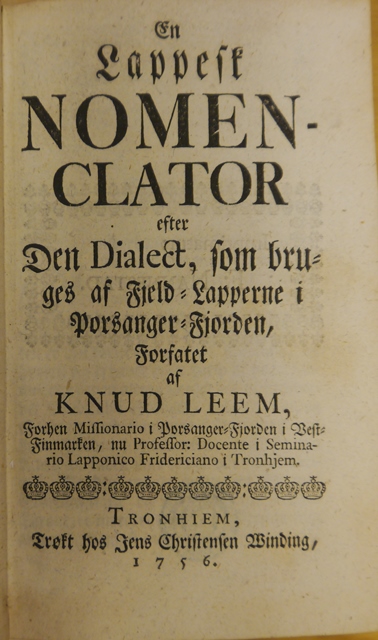 The other substantial piece of work for which Leem is remembered today also has a Hannås connection. It is a study of Norwegian dialect words, Norske Maalsamlingar fraa 1740-aari, which was only published many years after his death, in 1923. The editor of that work was Torleiv Hannaas, a professor at Bergen University and father to Torgrim Hannås. The bookplates of both these distinguished book collectors, father and son, appear in our copy of Leem’s Grammatica. 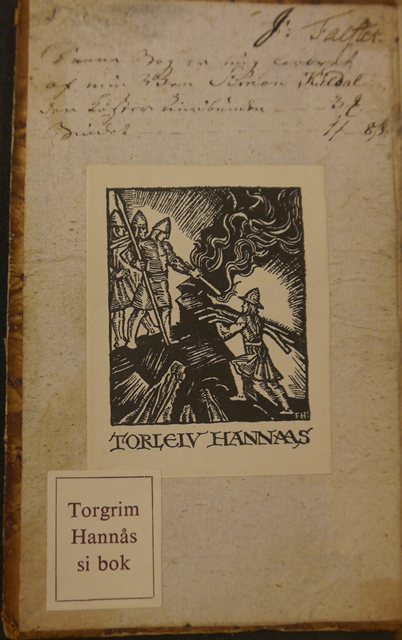 Knud Leem’s contribution to the area of Sami studies, both linguistic and ethnographic, continues to be important and recognised to this day. 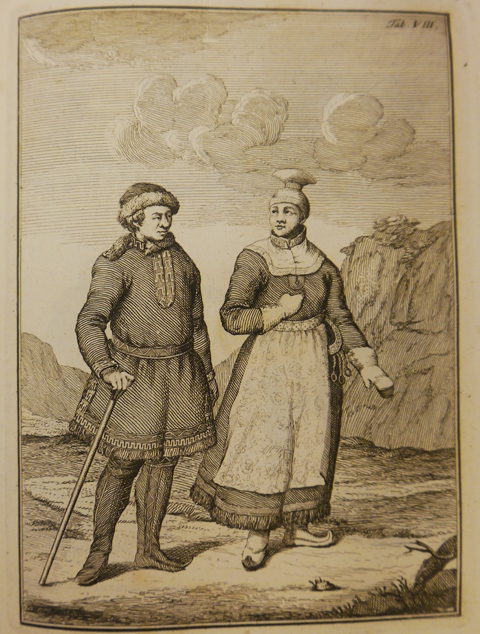 Sami couple in traditional dress. From Beskrivelse over Finmarkens Lapper.