On 21 October, to mark the approaching 500th anniversary of Martin Luther’s 95 Theses and of the start of the Protestant Reformation as well as the 350th anniversary of the death of Samuel Boguslaus Chylinski, the British Library hosted a seminar on the first printing of the Bible in Lithuanian (1660), the legacy of Chylinski and links between British and Lithuanian Protestants.

Samuel Boguslaus Chylinski, the son of a Calvinist preacher, was born around 1633 in Šventežeris, in the Grand Duchy of Lithuania. Educated in the Calvinist school in Kėdainiai, in 1653 Chylinski was sent to the Franeker Academy  in the Netherlands to study theology in preparation for the translation of the Bible into Lithuanian. Unable to return to the Grand Duchy because of the war, in 1657 Chylinski travelled to England where he received encouragement and financial support from his compatriot Samuel Hartlib as well as English Protestants including Henry Wilkinson, John Wallis and Robert Boyle. Boyle, a scientist and liberal thinker, was preoccupied with the idea of translating the Bible into vernacular languages, among others Irish, Welsh, Malay, Turkish and Lithuanian.

In 1659 Chylinski published an ornate pamphlet An Account of the Translation of the Bible into the Lithuanian Tongue in which he claims to have translated the whole of the Bible. An Account also includes a testimonial from Oxford professors and other prominent public figures supporting Chylinski in his endeavour. The pamphlet was meant for English patrons and was published in order to raise funds for the printing of Chylinski’s translation. The Latin version of the brochure, Ratio Institutae Translationis Bibliorum in Linguam Lithuanicam, was published in Oxford in 1660. 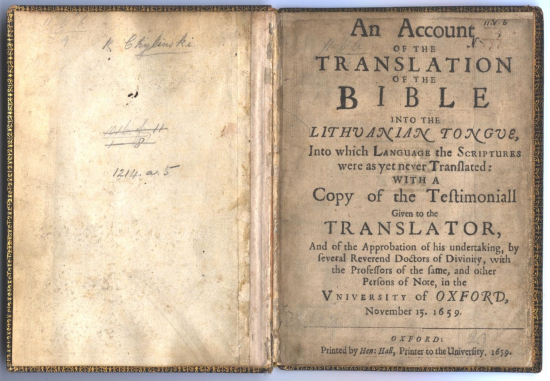 Samuel Boguslaus Chylinski, An Account of the Translation of the Bible into the Lithuanian Tongue (Oxford, 1659)
1214.a.5

On July 12, 1661, Royal letters patent was issued by King Charles II, ordering a collection to be held towards the printing of the Lithuanian Bible and towards the relief for the Lithuanian Protestant churches devastated by the war. Money was to be collected in churches throughout England and Wales; door-to-door collections were also to be organised if necessary. The brief was sent to at least 40 major towns. A Privy Council memorandum, issued on the same day, stated that the brief should not serve as a precedent as the case was unique.

The printing of Chylinski’s translation started in 1660 but came to a halt in 1662 due to disagreements among Lithuanian Protestants. Chylinski’s printing expenses were misrepresented as his private debts and doubts were cast on the quality of his translation (it is important to remember that one of the persons appointed by the Vilnius Provincial Synod to check the translation was working on his own version). Chylinski lost the support of his patrons. His manuscript translation of the New Testament, in the British Library’s collections, includes many inscriptions, among others an unaddressed draft letter in which the author, destitute and desperate to return to his mother country, is asking for financial help. It is not known who the addressee was and whether the letter reached them. Chylinski died in poverty in 1666. 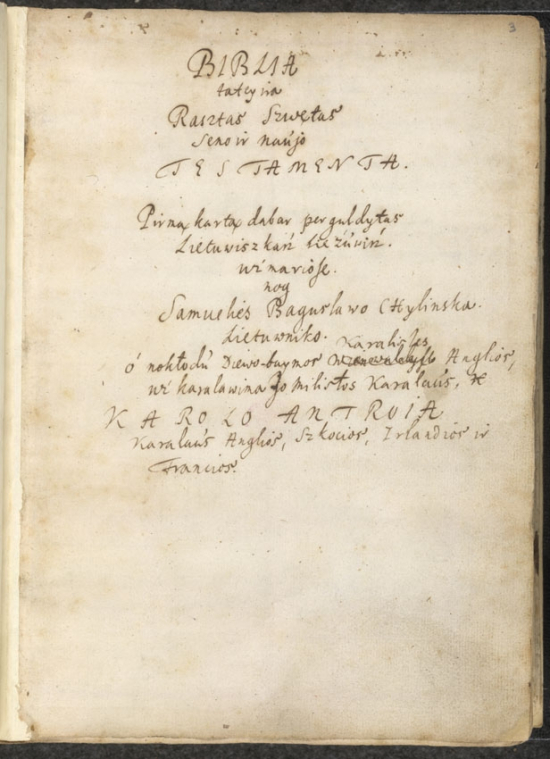 Manuscript of Chylinski’s translation of the New Testament, 1658. Add MS 41301

At the beginning of the 20th century there were three known copies of Chylinski’s Bible. The so-called Berlin copy has been missing since World War II; the Vilnius copy has been lost since 1918. The only surviving fragment of Chylinski’s printed translation of the Old Testament (Genesis-Joshua), acquired by the British Museum in 1893, is in the British Library’s collections. 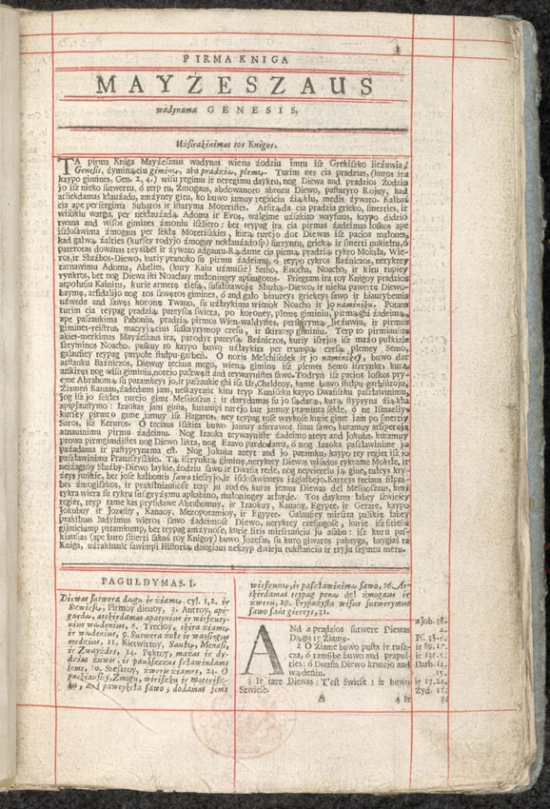