The philologist and the silkworm

Rafael Bluteau (1638-1734) was born of French parents in London and spent most of his life in Portugal. His training in English, French, Italian, Spanish, Latin and Greek qualified him superbly to produce his most famous work, the Vocabulário Portuguez e Latino (Coimbra, 1712; 828.i.1-8.).

Less known is this newly acquired work on the breeding and cultivation of the mulberry and the silkworm which feeds on it, the first Portuguese treatise on the subject.

It doesn’t do to underestimate the importance of the silk trade, and the silkworm lived like a prince.

They don’t like noise, so keep them away from noisy mechanicals such as blacksmiths (p. 136). They don’t like the wet, so ensure the mulberry leaves on which they feed are kept dry (p. 151). They do like beautiful smells (incense and benzoin, p. 160) but don’t like the breath of people who’ve been eating garlic, onions or leeks (p. 162). Naturally they don’t like thunderstorms. Obviously you can’t stop the weather, but you can try to counter its effects with nice smells such as slices of ham or fried chouriço (p. 165) and by getting a large number of people to make a noise to cover up the thunder (p. 166). 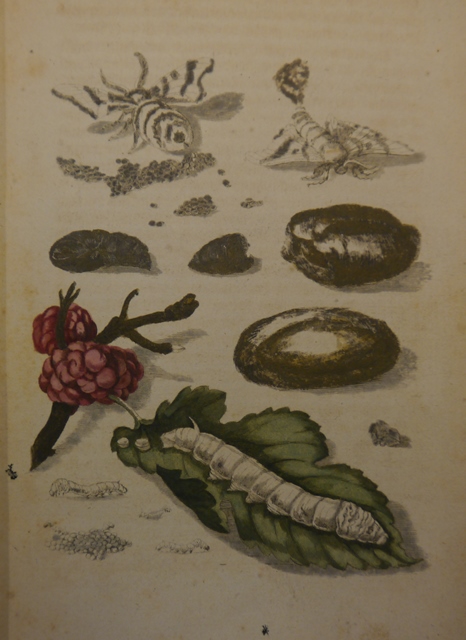 The silkworm was fêted in poetry from the earliest years of the printing press: Marco Girolamo Vida wrote an epic on the life of Christ, the Christiad (published 1535) but also the De bombyce, printed in a collection published in Rome in 1527 (C.4.h.5) and cited by Bluteau (p. 177).

Bluteau closes his technical treatise with two Latin paeans, one in prose and one in verse, to the not so humble worm.

And I end by quoting the finale of his Portuguese text:

Let us close by saying of the silkworms that all is miraculous while they live, and everything that remains of them after death is of benefit.