These were the words in which Andrew Field, in his The Complection of Russian Literature (London, 1971; X.981/2277) described Nikolai Mikhailovich Karamzin, who was born 250 years ago on 12 December 1766, and without whom Russian literature and the Russian language would never have developed as they did. 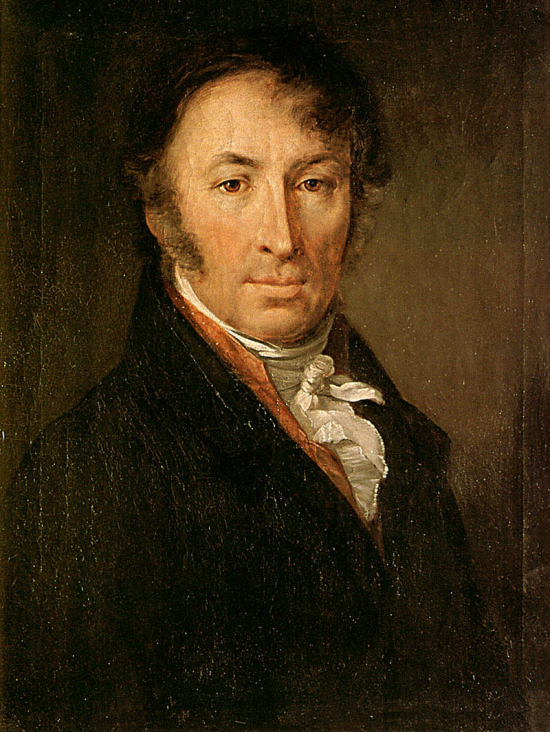 Portrait of the writer and historian N. M. Karamzin (1818)  by V. A. Tropinin (Tretyakov Gallery, Moscow. Image from Wikimedia Commons)

Ironically, perhaps, he was not of Russian but of Tatar stock, as his name indicates, though his father was an officer in the Russian army, serving in the Simbirsk governate at the time of his son’s birth in the village of Znamenskoe. However, young Nikolai did not remain in the provinces but was sent to study in Moscow and later moved to St. Petersburg, where he made his first literary contacts and began to experiment with translations into Russian. Among these was Shakespeare’s Julius Caesar (1787), one of the first of his plays to appear in Russian. In the introduction, his first foray into historical literary criticism, Karamzin acclaimed Shakespeare’s capacity to fathom human nature, and noted that the average Russian reader was wholly unfamiliar with English literature, a situation which he set out to remedy. He also produced a new translation of Lessing’s Emilia Galotti (1788) which was successfully staged in Moscow.

He also identified another serious gap in the reading material available in Russian: literature for children. In 1785 he launched Detskoe chtenie dlia serdtsa i razuma (‘Children’s Readings for Heart and Mind’), the first Russian periodical for young readers. Containing lively articles on science, history and geography as well as stories and fables, many translated from German, it drew on Karamzin’s earlier experience as an educational publisher. Together with his co-editor Aleksandr Petrov, he also included translations of tales by Madame de Genlis and prose versions of James Thomson’s The Seasons.

In 1789 Karamzin decided to embark on extensive travels through Germany, France, Switzerland and England, which would later provide material for his Pis’ma ruskago puteshestvennika (‘Tales of a Russian Traveller’). It is available to English-speaking readers in an excellent translation by Andrew Kahn (Oxford, 2003; YC.2004.a.2638), with an introduction in which he points out that the book ‘represents an ambitious attempt to join Enlightenment discourses and literary modes…producing nothing less than an anthropology of the Enlightenment.’ Of special interest to such readers is his account of visiting London in 1790, including Hamlet at the Haymarket Theatre, ‘the lovely village of Hampstead’, Parliamentary elections and the Tower of London, where he records that ‘we were shown the axe with which Anne [sic; actually Jane] Grey’s head was cut off!!’. 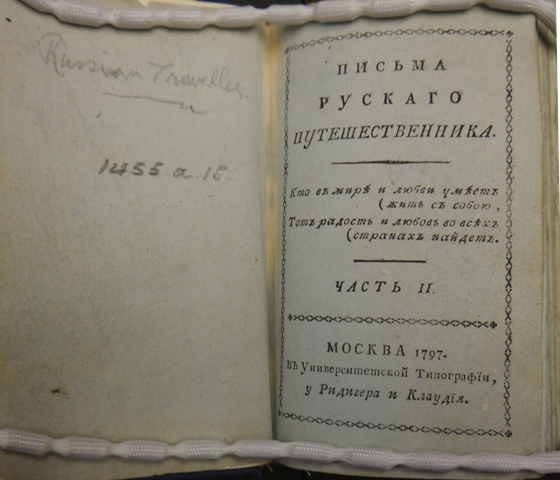 In his attempts to link Russia into a wider European literary tradition, Karamzin also experimented with novel-writing, though his efforts in this genre are, to modern tastes, less successful than his traveller’s tales, and more interesting for their contribution to language and style than their intrinsic merits. In the interest of greater suppleness and fluidity he started the process of introducing Gallicisms to replace Slavonic expressions and aid him in transmitting the high-flown elegance of Sentimentalism to Russian readers. Unfortunately the results smack less of Sentimentalism than sentimentality, and one of his most famous tales, Bednaia Liza (Poor Liza; 1792), ends in typically melodramatic style: ‘Liza’s mother heard of the dreadful death of her daughter, and her blood went cold from the horror – her eyes closed forever. – The cottage became deserted. Now the wind howls through it, and hearing this noise at night, superstitious villagers say: “There moans the dead one; there moans poor Liza!”’ (tr. David Gasperetti; Three Russian tales of the eighteenth century; DeKalb, Illinois, 2012; YC.2012.a.13725). 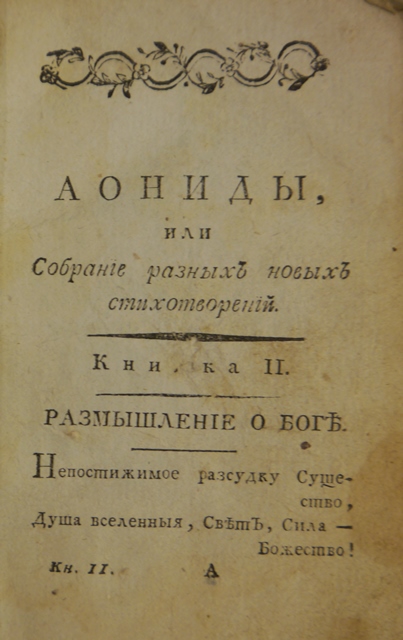 However, if Karamzin was a less than distinguished novelist, he was a pioneer as a historian. This field was comparatively undeveloped until he began his twelve-volume Istoriia Gosudarstva Rosiiskago. After a successful career as an editor and publisher, launching the Moskovskii zurnal (Moscow Journal) in 1791 followed by the poetical almanac Aonidy (The Aonides; picture above) in collaboration with G. R. Derzhavin and Ivan Dmitriev, in 1803 he decided to retire to Simbirsk to concentrate on his new venture. Learning the reason for his withdrawal from public life, Tsar Alexander I invited him to Tver to read the first eight volumes. Not surprisingly, he was a strong advocate of autocracy, and his wish that ‘there should be no Poland under any shape or name’ strikes a startling and sinister note to modern readers. Yet these considerations should not detract from his achievement as one of the first Russian authors to gather and annotate historical materials systematically and thoroughly. Despite his rational Enlightenment views (he was also an active Freemason), Karamzin was not immune to the spirit of an age which enthusiastically devoured Scott’s historical novels and uncritically swallowed the Ossian forgeries, and as such was a man of his time whose glamourizing of the reign of Ivan III is typical of the period.

He did, however, express a great admiration for the attainments of Catherine the Great, and the British Library possesses a copy of a German translation by Johann Richter (picture below) in which he pays fervent tribute to her work as an innovator, reformer and patron of the arts and philanthropy. 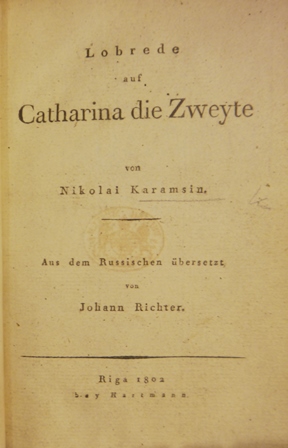 Karamzin ended his days happily on 22 May 1826 at the Tauride Palace, where he had lived as a guest of the Tsar who had eagerly awaited the appearance of every new page of the histories. Though the conservative views which strongly influenced Alexander, such as his criticism of Speransky’s reforms, undoubtedly had a detrimental effect on the course of Russian political history, his accomplishments in forging links between Russia and the West and even giving its alphabet a new letter (ë) make him a figure of lasting significance and continuing interest.