To mark the 70th anniversary of the Association of Ukrainians in Great Britain (AUGB), an academic conference was held earlier this month at the Association’s Central Office in London. Academics from both the UK and Ukraine considered various historical aspects ranging from prominent personalities to émigré publications to highlighting a rich array of data and source archival documents. 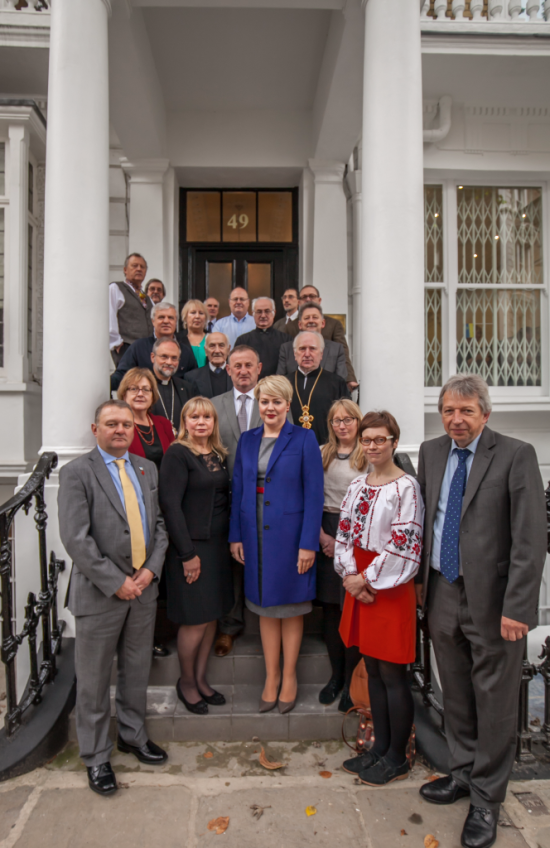 Speakers at the conference (Photo by Ihor Polataiko, reproduced by kind permission of the AUGB)

The origins of the AUGB go back to 1945 when Ukrainians serving in the Polish Armed Forces under British command came up with the idea of creating an official body to cater for their ethnic and spiritual needs. With the help of the Ukrainian Canadian Servicemen’s Association, based in London’s Sussex Gardens, they coordinated activities from late August 1945 up to the AUGB’s inaugural General Meeting in Edinburgh in January 1946. A Central Office was purchased in March 1947 which provided a base from which to help incoming Ukrainians settle in Britain.

In early 1949 an Invalids Fund was also established after the British Government decided (December 1948) to transport some 300 sick and injured Ukrainian former prisoners of war to Germany (and from there back to the USSR to face almost certain death). The decision was ultimately reversed in the face of Ukrainians threatening all-out strike action in protest, though the London Times of 30 December 1948 suggested that it was the hunger strike of the individuals concerned, coupled with the ‘repugnant’ nature of the government’s decision, that ‘naturally’ aroused objections among ‘ordinary Englishmen’. During that year alone, AUGB members donated a shilling a week to raise over £17,000 - the equivalent of well over £1.3 million today. This enabled the purchase of a property in Chiddingfold, Surrey, to provide care for those who were unable/unfit to work, or who simply required respite care. The property also accommodated summer youth camps until the 1960s and subsequently became a residential care home until its closure in 2012.

Over 300 Branches of the Association were created in the late 1940s but this number became substantially reduced by the mid-1950s as Ukrainians settled in closer proximity to each other in major towns and cities. Within these clusters they formed amateur cultural groups – choirs, dance ensembles, orchestras, theatre groups  - and also collected funds to purchase community centres. 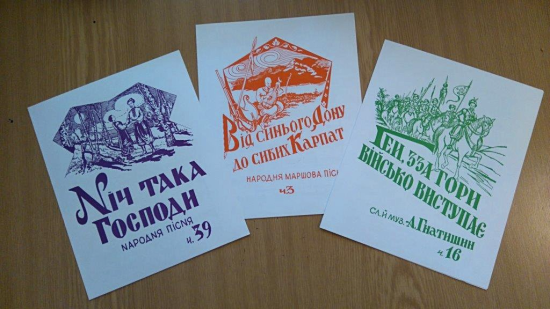 As AUGB activities expanded, the AUGB Library (1947), the Association of Ukrainian Women (1948) and the Association of Ukrainian Teachers and Educators (1955) were established. The last coordinated community nurseries and language schools for a growing second generation. To facilitate consistency the AUGB published practical guidelines (in 1955) on methods of education, notably in four volumes of Materiialy Vykhovannia i Navchannia (Educational and Teaching Materials) dedicated to different aspects of Sunday school teaching.

I am often asked what drove that first generation of Ukrainians to be so generous with their time and the little money that they earned. The answer lies among the many resolutions adopted during the Association’s Annual General Meetings, illustrated by this example from 1948: “The AUGB, as a non-party generally-national organisation, calls on all Ukrainians to work together, irrespective of faith and political persuasion, to attain our ultimate goal – a Free, Independent and Sovereign State of the Ukrainian Nation”. 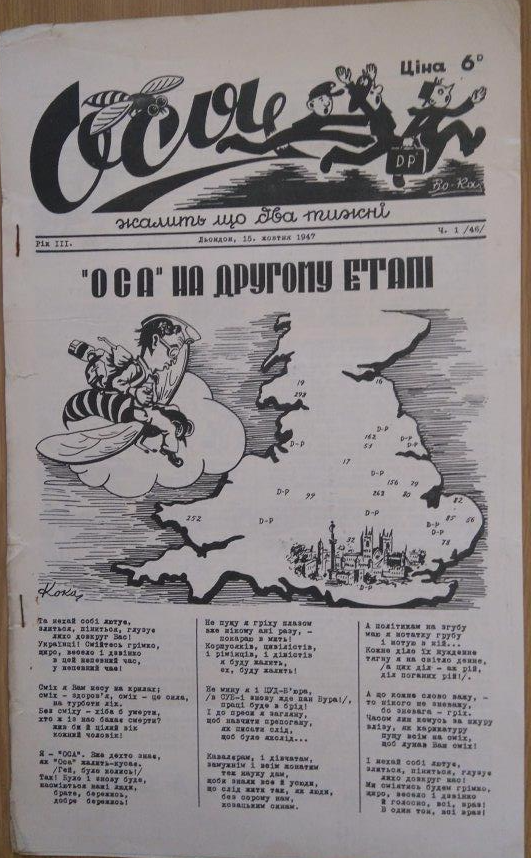 The latter was supplemented by the publication of children’s books, such as the alphabet and early reading text-book Bukvar (1958), or popular national tales, such as ‘Grandad’s Turnip’ (1954-55), or indeed the delightful narrative poems of the exceptional Leonid Poltava – Zhuchok-Shcherbachok (‘The little beetle Shcherbachok’; W.P.9391/3.), Slon po Afrytsi khodyv (‘The elephant walked through Africa’; 1955; W.P.9391/2) and others. 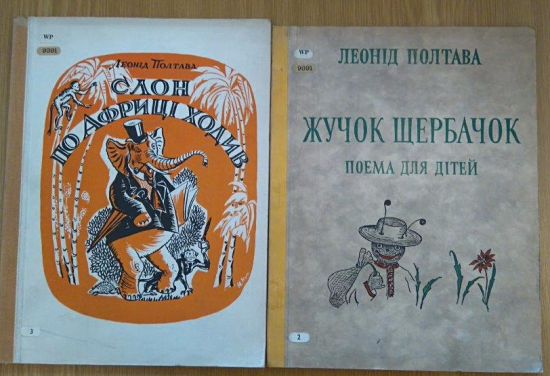 Books by Leonid Poltava from the British Library’s Collections

The books were published predominantly in Ukrainian but there were exceptions. Perhaps of particular note was the publication of Song out of Darkness, a collection of poems by the national poet, Taras Shevchenko translated by Vera Rich  to mark the centenary of the poet’s death, which we are now working on to update and republish. 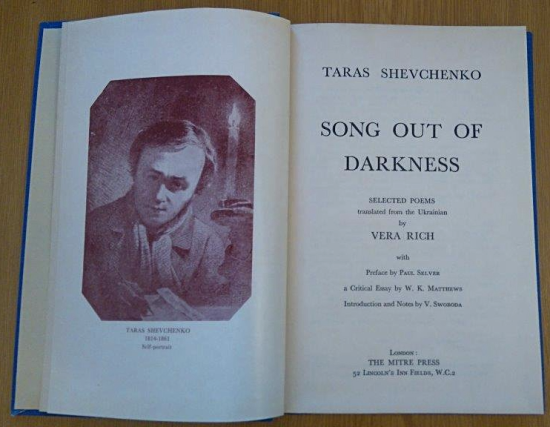 The AUGB’s Library and Archive was also named after the Ukrainian bard. Today it works closely with the British Library and its collection of over 35,000 books is open to all students, academics and casual visitors interested in studying Ukrainian diaspora publications. 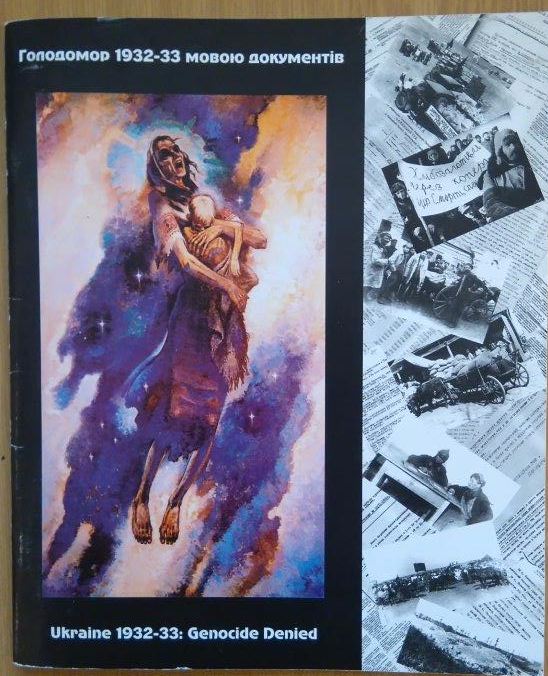 As Ukrainians celebrate the 25th anniversary of the independence independence referendum vote of 1 December 1991 and simultaneously focus on events in Ukraine over the past three years (notably the annexation of the Crimea and the ongoing war in Eastern Ukraine), we continue to face fresh challenges, adapt and seek new ways of developing, communicating and working with our members and the wider community. Our newspaper, website and social media aim to bring news and events to wider audiences and promote a greater understanding, not only of our heritage, but the contribution that we can make to academic research and cultural diversity.