Maria Sibylla Merian, who died 300 years ago today is justly remembered both as a pioneering naturalist and an entomological and botanical artist, and as a woman who made her mark in both art and science at a time when these fields were dominated by men.

Maria was born in Frankfurt am Main in 1647 into an artistic family. Her father was the engraver and publisher Matthäus Merian, but his death when Maria was just three years old meant that her own talent was mainly fostered by her stepfather Jacob Marrel. As well as being encouraged to draw and paint, the young Maria developed a fascination with insects and began collecting, studying and drawing them.

In 1675 Maria published a book of botanical illustrations, the Neues Blumenbuch. Four years later, the first part of a new work appeared. Der Raupen wunderbarer Verwandlung und sonderbare Blumennahrung (‘The Wonderful Transformation and Strange Floral Food of Caterpillars’ – a second part followed in 1683) drew on Maria’s interest in and close observation of caterpillars and butterflies, illustrating and describing the stages of the different species’ lives and also the specific plants that they fed on. 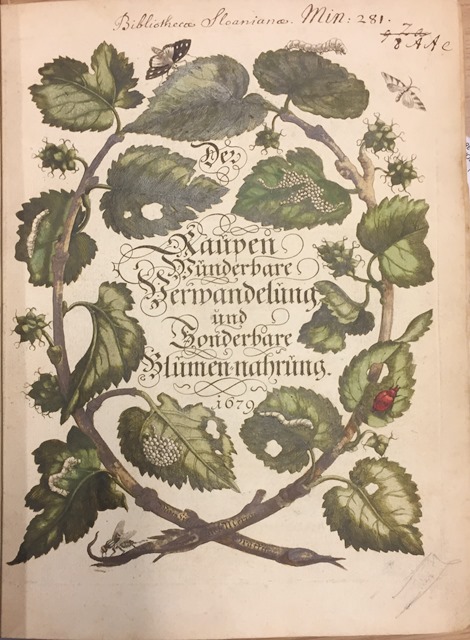 It was not until 1705 that Maria published another book, but for lovers of both science and art it was worth the wait. In 1699 she had travelled  from her home in Amsterdam to Suriname with her daughter Dorothea to record the insect life of the country, then a Dutch colony. The resulting work Metamorphosis insectorum Surinamensium appeared in 1705 and combines careful observation and detailed recording of the insects’ habitats, lives and behaviour with aesthetic skill in depicting the different stages of their life-cycles and their favoured plants. The British Library holds a splendidly hand-coloured copy of the 1726 edition (649.c.20) from which the pictures below are taken.

In Suriname, as in Frankfurt, Maria’s primary interest was in butterflies: 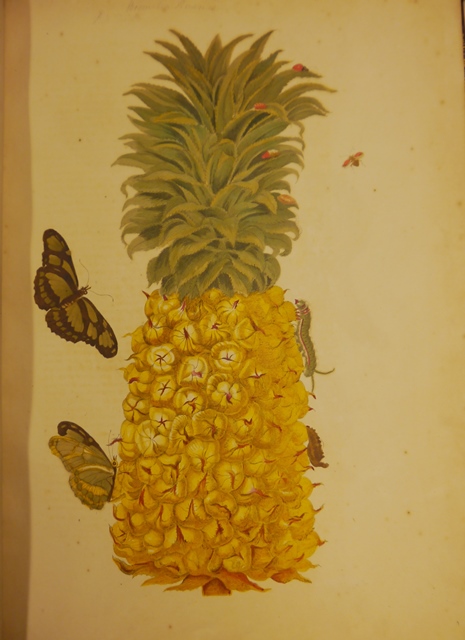 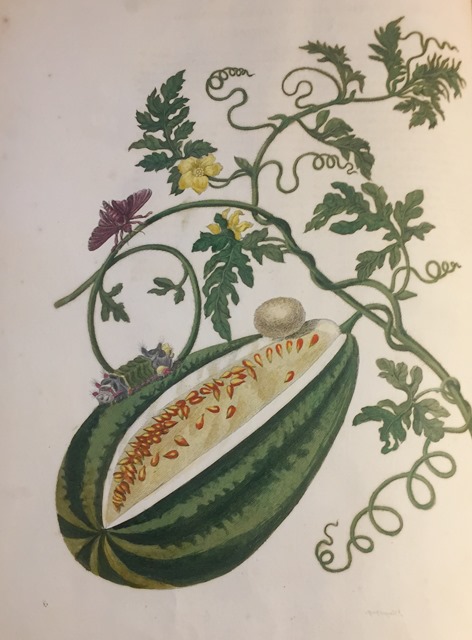 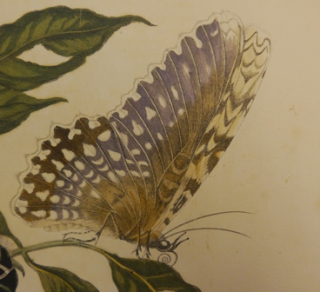 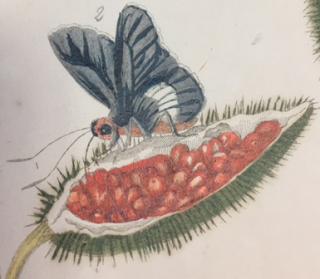 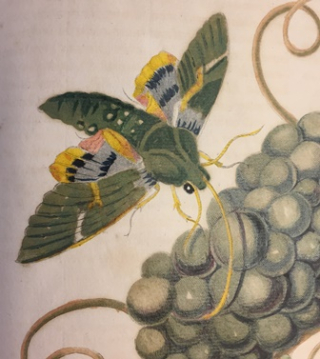 But as well as butterflies, Maria also depicted and described other insects as in these images. 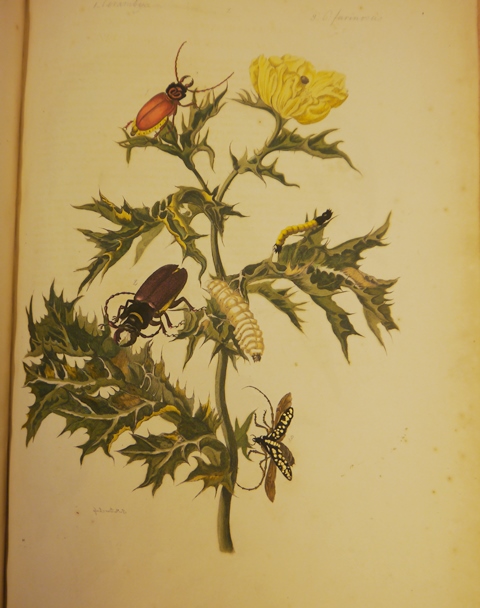 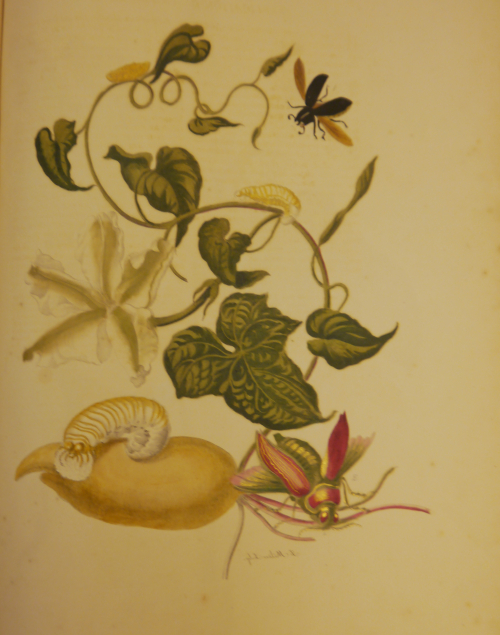 Plate 50. The painter has used gold to capture the iridescence of the fly in the bottom right-hand corner

She also portrayed spiders (for the sake of sensitive arachnophobes I merely add a link), snakes and lizards: 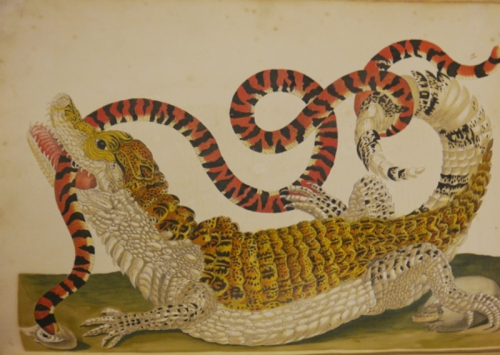 Plate 69, the famous image of a caiman attacking a snake which is trying to steal its eggs as the young hatch

In one image she even shows a mammal, a tree-rat carrying its young on its back, although her hand seems a little less sure here than with the insects: 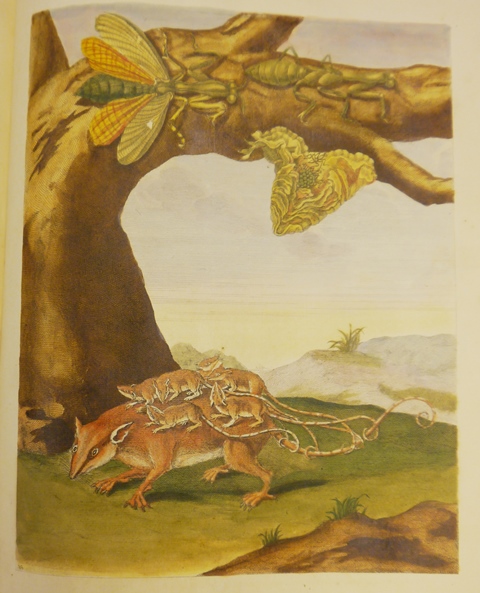 Like many fine-printed books of its day, our 1626 edition of Metamorphosis Insectorum Surinamensium has a fine engraved frontispiece which has also been hand coloured. It shows a woman instructing an eager group of botanising putti, with a Surinamese landscape in the background. 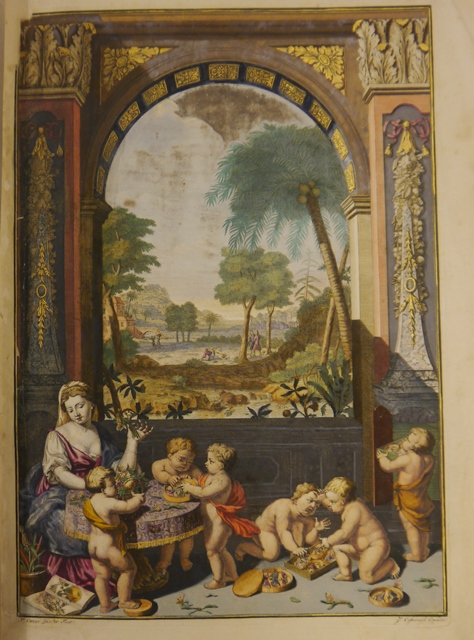 The artist of the frontispiece clearly knew the work he was illustrating. The open book in the bottom left-hand corner of the picture shows one of Maria’s plates, in a nice tribute to the original creator of the work. 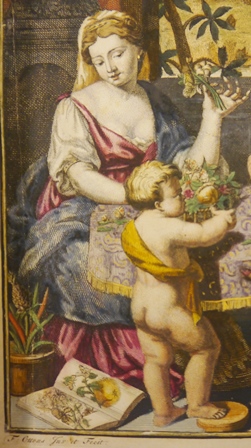 Detail from the frontispiece (above) and plate 29 (below) 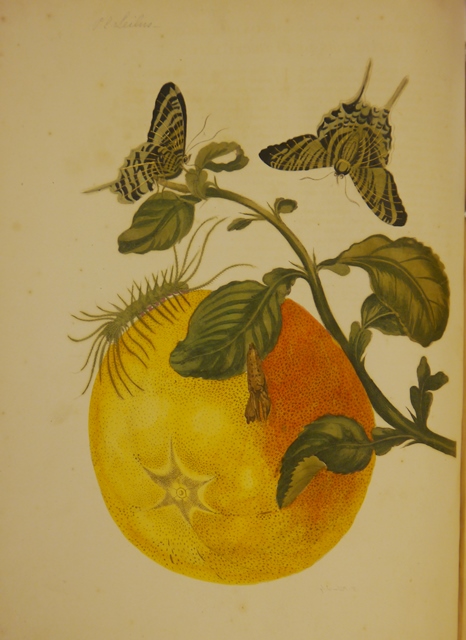 I hope the gallery above will likewise act as a tribute to a woman who is justly celebrated  today for her achievements as both artist and natural historian.