Jane Austen’s huge popularity today makes it easy to forget that for the first few decades after their publication her novels were comparatively little read even in the English-speaking world. In continental Europe, this lack of interest was even more pronounced. Although translations of Austen’s novels were published in a number of countries during the 19th century, they generally failed to make much impact.

This was particularly true of Germany. Prior to 1948 only three Austen translations appeared in German. The first of these was her last completed novel, Persuasion, translated by Wilhelm Adolf Lindau.

Unlike some early translations, which adapted or abridged Austen to suit local tastes, Lindau’s is an extremely faithful one. The main change that he made was to germanise the characters’ forenames (although their surnames remain resolutely English): Anne Elliot becomes Anna, Frederick Wentworth is Friedrich, the Musgrove sisters are Henriette and Luise, and so on. Even the author becomes ‘Johanna Austen’ on the title-page and in Lindau's summary of the ‘Biographical Notice’  from the first English edition of Persuasion. Lindau also adds a few footnotes to the text, explaining, for example, that Lyme is ‘a coastal town in Dorsetshire’ and that Mr Elliot’s travelling on a Sunday counts against him with Anna because it breaks the observance of the Sabbath, ‘which is very much respected in England.’ 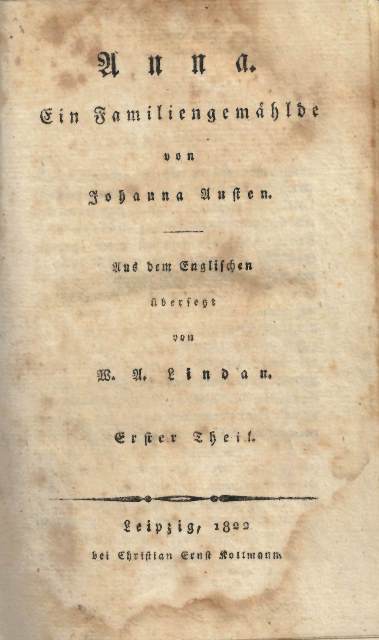 Lindau did change the book’s title, calling it Anna, ein Familiengemählde (‘Anna, a family portrait’). Perhaps he thought Austen’s own title too oblique or not sufficiently appealing – and it is worth noting that this alone of Austen’s novels still appears under different titles in the German-speaking world, most commonly as Anne Elliot or Überredung (a literal translation of Persuasion) or some combination of these, but at least once under the unlikely title Verführung (‘Seduction’). But Lindau may also have deliberately chosen to emphasise the family ties and interrelationships among the Elliots, Musgroves, Wentworths and Crofts.

A review in the Morgenblatt für gebildete Stände (PP.4735) of 21 December 1822 certainly picked up on this aspect, describing the novel as ‘a family portrait in every respect’, with well-drawn everyday domestic situations and conversations, and with a lead character who will win readers’ hearts. The translation is praised, but the novel is criticised overall for being too slow and drawn-out for German tastes. The Wegweiser im Gebiete der Kunst und Wissenschaft of 4 September 1822 also praised Lindau for capturing Austen’s ‘simple but cultivated style.’ The reviewer here, while admitting that the novel will ‘gently arouse’ rather than ‘actively grip’ the reader’s mind, was clearly less bored and states that the work ‘fully deserved to be translated.’

Although the very few reviews of Anna were mainly positive, the book does not seem to have been a great success and no further Austen translations appeared until Stolz und Vorurteil, Louise Marezoll’s version of Pride and Prejudice, in 1830. This was a freer translation than Lindau’s and sacrificed many nuances of Austen’s original, possibly to avoid the criticisms levelled against the slow pace of Anna, but again the novel enjoyed little success. 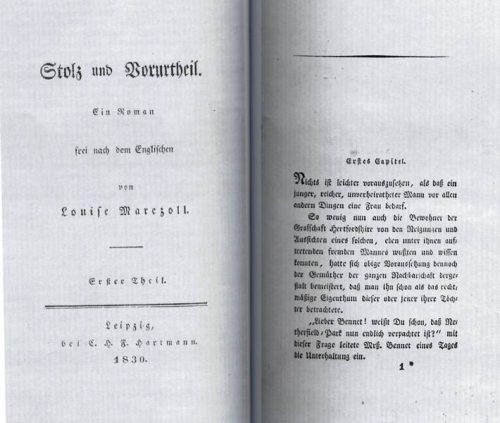 Germany, it seemed, was just not interested in Jane Austen. Although both Lindau and Marezoll were prolific translators of Anglophone literature, neither produced any further German translations of Austen’s work. Nor indeed did anyone else until 1939 when Karin von Schab published a new Pride and Prejudice translation under the title Elisabeth und Darcy.

After the Second World War, more of Austen’s work gradually began to appear in German, but it only in the last couple of decades that she has begun to reach a wider German-speaking audience, due in part (as indeed is Austen’s current phenomenal popularity in Britain and America) to the film and television adaptations of the 1990s and 2000s. Although some of these may be more in the manner of Marezoll’s free adaptation of Austen than Lindau’s more faithful rendition, let us hope that Lindau would nonetheless be gratified to see an author he first tried to introduce to the Germans finally receiving their attention.